How to play the Coven Counters Precon in EDH 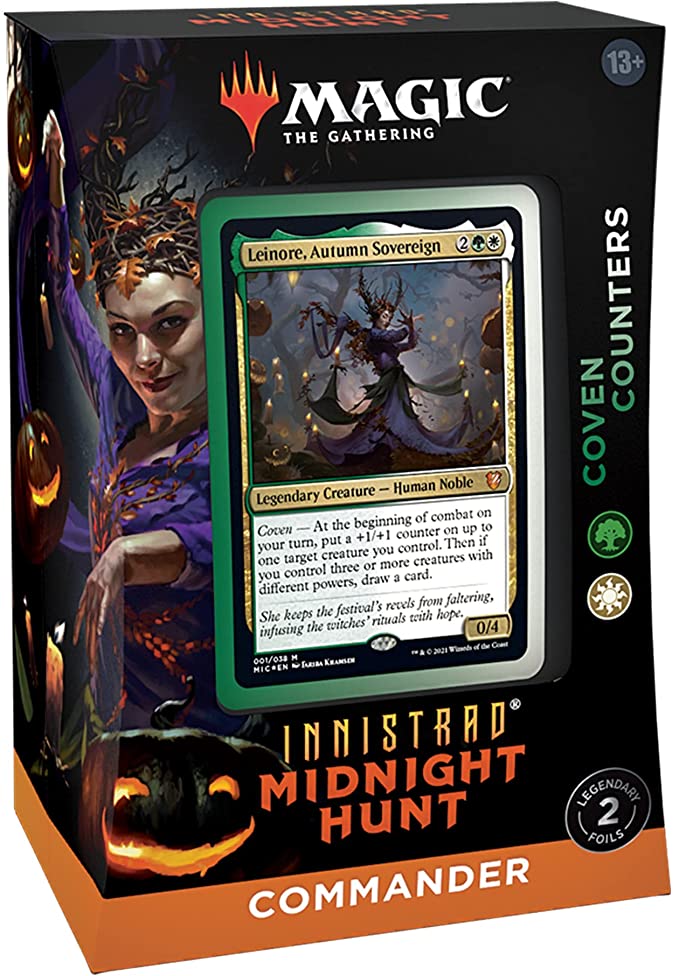 This is the comprehensive guide to using the Coven Counters preconstructed deck, commanded by Leinore, Autumn Sovereign. This guide has all the information needed to pilot the deck to victory straight out of the box! 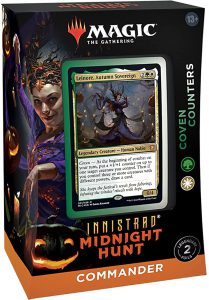 The primary game plan of Coven Counters is to achieve Coven early, take advantage of Leinore’s draw ability, and then pump its handful of creatures, which are primarily Humans, to massive sizes in order to overwhelm opposing defenses.

Leinore’s card drawing ability is extremely powerful, and will be the deck’s first priority in the early game. Leinore grants +1/+1 counters and has zero power herself, allowing Coven to be triggered with ease. Once that happens, the deck can begin drawing cards and building out its board state. There is also a Human tribal subtheme to the deck. Most creatures are Humans, and the deck has about eight cards that pay off the creature type, but it won't be a main factor in this deck's game play.

Once the deck can reliably trigger Coven and access new cards, it can showcase its greatest strength: getting large amounts of power and toughness into play. Once Coven Counters has one large creature out, it can sit behind that creature and build out its boardstate until it has a lethal attacking force.

Another surprising strength that comes from this deck is its ability to ramp. The deck contains a whopping 15 ramp spells, and while some are more efficient than others, it still leads to a consistent access to extra mana.

One last thing this deck can do very well is present a high number of finishers. These cards, in addition to several mentioned earlier, can close out games very quickly.

Coven Counters is certainly good at getting on board, but it does have a few glaring weaknesses that need to be kept in mind.

Wall of Mourning, Lifecrafter’s Bestiary, Inspiring Call, and Shamanic Revelation are literally the only sources of card draw in this entire deck aside from the commander. It could easily run out of steam if it can’t find one of these powerful cards, or if Leinore is destroyed early. For this reason, changing the commander to Kyler, Sigardian Emissary straight out of the box could be a mistake. Without consistent access to Leinore, this deck will run out of steam too quickly and will crumple to a board wipe.

The other weakness of this deck comes from a severe lack of spot removal. It contains three board wipes in the form of Cleansing Nova, Celestial Judgment, and Hour of Reckoning, but struggles intensely to remove a single important threat.

Swords to Plowshares and Beast Within are the only ways Coven Counters has of answering a single creature. This is the single biggest weakness of the deck, and whether it is playing at the precon level or not, many scenarios will arise where one creature is holding back this deck’s entire board and there is literally nothing to be done about it.

Ruinous Intrusion and Return to Dust round out the tiny spot removal suite for this deck, and are decent cards, but again, the total number is too low and the deck will suffer for it.

The final thing to mention about Coven Counters before getting to its underperformers is its matchup against the other Innistrad: Midnight Hunt Commander precon, Undead Unleashed.

Three cards in this deck stand out as complete hosers for the Zombie tribal strategy of the opposing deck. Remembering that these cards are the deck’s best weapons against Zombies will be crucial. Any of these spells, when timed correctly, can single handedly win a game for Coven Counters.

Finally, the following cards stand out as substantially weaker than most other cards in the precon, and should be considered when keeping opening hands or choosing which cards to deploy first.

Knowing where Coven Counters struggles, as well as where it accels, will be integral to navigating through tricky board states. Having a full understanding of this deck will lead to many future victories!