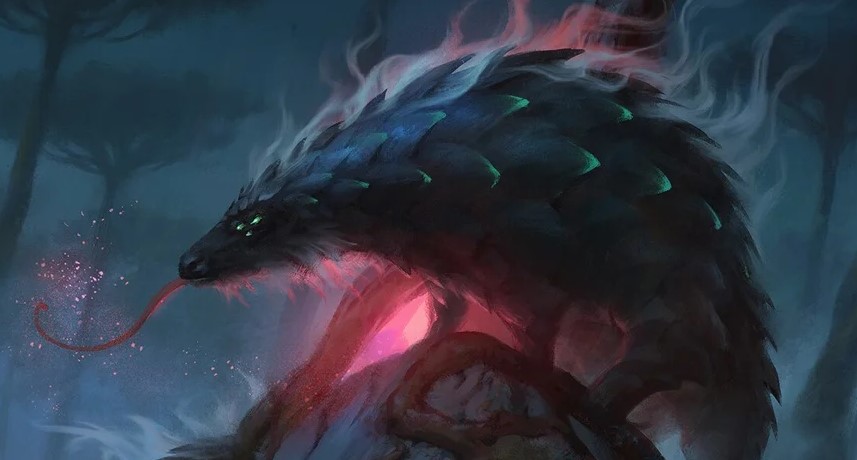 The Night is Dark and Full of Nightmares

For the civilians who live on Ikoria, black mana is literally nightmare fuel. The base creature type for the color in the set is Nightmare, and this setting has nearly doubled the number of them in Magic. Today I'm reviewing all of the chittering and stalking horrors that lie in the dark spots of this plane, but it is our place to manipulate these beasts to instill fear in our opponents. Let's get started!

I really enjoy Mutate as a concept. I find the design ambitious and fun, but for many of the cards I'm left wanting more. Dirge Bat is, unfortunately, no exception to that sentiment. The allure of Mutate is the potential to create a super creature that towers above the battlefield and can shift at any moment! However, despite the grandiose plays that may come from this mechanic, I think the Bat offers very little to decks that aren't looking to maximize its the mechanic. At base rate, the Bat is a french vanilla 3/3 flyer that has flash. That isn't good enough for me to consider.

So why should be play it? For six mana, we can Mutate another creature at instant speed, and, if its successful, we get to fire off a Hero's Downfall. While I think that the Mutate commanders like Otrimi, the Ever-Playful will get use out of this, that's too much for most everyone else. It's most useful to repeat this ability, which requires a very committed theme. For other decks, I don't think I would play this over the variants we already have access to. Hero's Downfall, Vraska's Contempt, and Eat to Extinction all accomplish this effect for cheaper, and I don't think I'd want to pay more mana to risk even having a chance for this to be blown out.

It's been a while since we've seen such a powerful board wipe make its way through Standard. Gone are the days of Wrath of God and Day of Judgment, as adding limitations to have cheaper Wraths has become the norm. I think this is one of the broader ones we've seen. Yes, there will be situations where this misses cards, but I think those will be outweighed by the ability to exile everything else. Being able to wipe a token deck off the board is also a big plus. This reminds me a lot of Nightmare Unmaking from Commander 2019 because we're picking one side or the other. Nightmare Unmaking currently sees play in... only a paltry 1,300 decks? That's a discussion for another time, but wow, that's way too low.

13 of the Top 20 most played commanders from the last two years have an even converted mana cost. This hits powerful creatures like Breya, Etherium Shaper and Atraxa, Praetor's Voice as well as Kess, Dissident Mage and Meren of Clan Nel Toth.

I think this has a home in plenty of decks, but I do think that it'll have to compete in decks that don't have white in them. White is still the king of versatile board wipes, but these new cards are giving black decks some much-needed tools.

It's always fun to see throwbacks to classic Magic cards. Including cards like Hunted Wumpus and Hunted Dragon, "Hunted" cards give our opponents a benefit in return for a powerful creature that hits above its weight class. Hunted Nightmare is the newest addition to the family, but instead of deploying token creatures, we give an opponent's creature a deathtouch counter. Keyword counters are one of Ikoria's new mechanics, and this is the only card that puts these solely on an opposing creature. While there are political plays to be made by giving an opponent a boost in protection, we're walking away from the deal with a three-mana 4/5. While that's a sizeable beater for the cost, I'm not sure how much that's worth it. Menace does make the deal more enticing, but I think I'll leave this one to the non-singleton constructed formats.

Hmm. Where have I seen this effect before...?

And these are only the three most recent. These effects are staples of the Aristocrat archetype. Ever since Zulaport Cutthroat released years after Blood Artist, it's felt like one or two of these new effects have been released each year. However, unlike many of its predecessors, Bastion of Remembrance is an enchantment. Most of these effects have already moved out of the realm of counting their own death (Poison-Tip Archer says 'another', for example), so losing the creature type for a more resilient permanent type is an exchange I'm willing to make. Harder to reanimate, but harder to kill, too. And besides, it makes its own token! This isn't a flashy card, but it's a welcome addition to an established and powerful archetype, and will likely fare better than the more expensive versions like the Vampire.

Call of the Death-Dweller is a unique modal reanimation spell. While we can only revive small creatures, I'm excited to see this design. If we maximize the converted mana costs, it's effectively half of a Gruesome Menagerie with the added benefit of putting keyword counters on the creature(s) we choose to bring back. For keywords, themselves, deathtouch and menace are both strong, though the former is more universal. Menace can be okay, but you need a very low-to-the-ground aggro deck to make the most of it. That's the icing on the cake, though; making our creatures better is ancillary to bringing them back from the yard.

The most common use case for this card will likely be to bring back a single two-cost or three-cost creature. Three-drop creatures are often powerful and utilitarian, and getting extra value from this helps to win games. One-drops are somewhat rare outside of mana dorks, but getting one (or two) back after a Wrath is good value. You're playing those low-to-the ground cards for a reason, after all. Reanimation is already incredibly efficient in Commander, so it's hard for this to make the cut, but the potential to bring back multiple creatures at once may be worth testing.

Efficiently costed removal? I'm intrigued. Around 5% of the Top 100 creatures according to EDHREC can put counters on themselves, which leaves the rest vulnerable. While many decks incidentally run cards with counters, unless you're facing a deck that's dedicated to the craft, you'll often be able to kill them with a Heartless Act. Otherwise, you can strip three counters off a creature.

That second mode is really intriguing, actually. When I read the word "counter," the immediate resonance is with +1/+1 counters, and then to their negative counterparts. This spell doesn't specify what type of counters you must remove, which certainly makes it a hoser for keyword counters, but also gives it a strange role as a support piece. Remove any -1/-1 counters from your own Devoted Druid. Or from your own Glen Elendra Archmage. Let Mikaeus, the Unhallowed bring something else back again by getting rid of the Undying counter. Activate Thing in the Ice much sooner than people expect. Remove three counters from a Lost Auramancers or a Chronozoa.

Thief of Blood or Vampire Hexmage are altogether probably heavier hitters, but this is also a removal spell that might occasionally create opportunities for some quite unexpected plays that will really rile your enemies. You can ruin the pillowfort player's day by removing Filibuster counters from an Azor's Elocutors. If you're a fan of silver-bordered Magic, you can also ruin the Baron Von Count player's entire evening. Most color combinations that include black already have Terminates and other such removal spells that don't have restrictions on which creatures they can destroy, but if you're also able take advantage of removing the counters from your own creatures, give this a shot.

For the Mutate decks out there, three mana is right where you want to be. While draining each opponent for one and gaining one isn't the best rate for the mana, Insatiable Hemophage offers the potential to continually scale as you stack the chain of evolutions higher. Really, this is more of a bonus than anything, as paying upwards of six to ten mana to get two of these triggers isn't worth it, especially since it means you'll be stacking so many cards into one pile where one removal spell will ruin your day. Having deathtouch for a cheaper Mutate cost is why you're playing this card. Otrimi, the Ever-Playful will be playing this card, regardless, but having a few cheaper triggers for Nethroi, Apex of Death won't be turned away, either.

Not much to write home about for most decks, but Skullbriar, the Walking Grave is making out like a bandit in this set. Give it this deathtouch counter and a trample counter and it'll be mowing enemies down for days.

Tribal synergies aside, Serrated Scorpion is a nearly strictly better version of Tattered Mummy. While the Mummy, itself, is only included in around 700 decks, this effect seems strong enough at one mana to find a few niche homes. Shirei, Shizo's Caretaker, for instance, is extremely excited to loop this every turn. There might also be a few Rakdos, Lord of Riots or Judith, the Scourge Diva builds that would want cheap sacrifice fodder.

End of this Ikorian Nightmare

What are your thoughts on the black cards from Ikoria? Have you already made room for any of these new cards? Are you excited for Mutate? Are you planning to slam any of these cards into the new Commander 2020 decks? Let us know!