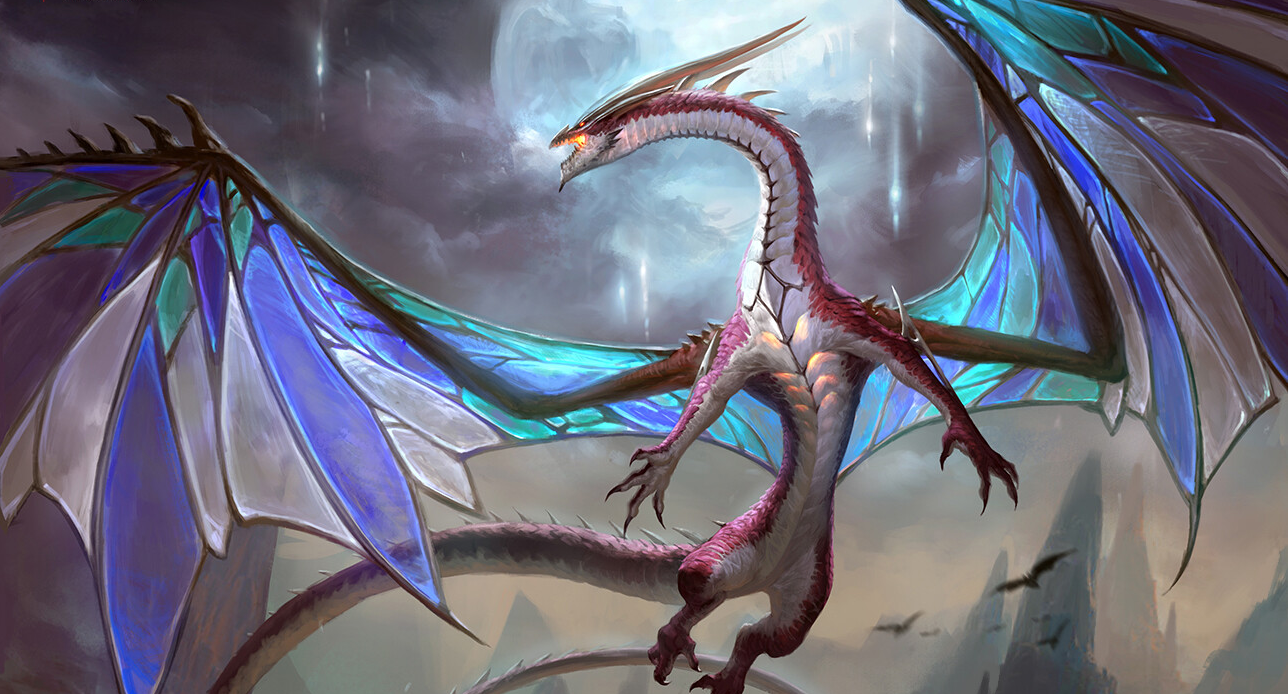 The Night is Dark and Full of Terrors

Welcome back to Innistrad! We've got Vampires, Dragons, and Werewolves galore in this red set review! Unlike some past sets, the red cards in Midnight Hunt are fairly straightforward. We have a few exciting new cards for EDH, and a handful of new toys for some very specific decks. Let's waste no time, and jump right in!

When evaluating Bloodthirsty Adversary, it's easy to think of it as simply having Multikicker for 2R. The primary difference is that you can repeat these again if the creature gets blinked. Essentially, in most EDH games, you have four ways of playing this card:

It's a lot easier to evaluate when the numbers are all laid out in front of you. I don't think this card was designed with Commander in mind. In other formats like Limited and Standard, this card has a lot more ubiquity and late-game relevance, but in Commander, the output will rarely match the input. Goblin Dark-Dwellers appears in fewer than 2,000 decks, after all. Perhaps Vampire Tribal lists will enjoy this, especially since Edgar Markov doesn't mind a two-mana 2/2 with haste. Zada, Hedron Grinder may like to recycle some cheap spells, too. Outside of Vampires and the odd Spellslinger deck, though, I think you can find better options.

Moonveil Regent has such a cool set of abilities, that I immediately wished it had been a multicolor commander that I could run. This dragon is going to be an absolute monster for 4+color decks, and still fairly effective for 3 color decks. Discarding your hand to draw 3 or 5 cards (considering there are only 9 four color spells) every time you cast a spell is absolutely ludicrous, and insane value to be digging through so much of your library. The Ur-Dragon players are going to love playing a 5 color spell, discarding a small hand, and drawing five cards to find soething to play for free. While the death trigger isn't a spectacular ability, it's not even needed for this dragon to be phenomenal, and is just icing on the cake.

Turning a heron into a phoenix makes the marine biologist in me so happy! That said, this is underwhelming for Commander. The 4/2 body isn't relevant in a multiplayer field with 40 starting life, and the switch from day to night is unreliable at best. I bet this could see a lot of play... in 60-card formats where this can be a four-of. Skip it for EDH.

Burn Down the House

There are a decent number of five-mana board wipes out there, from Fumigate to End Hostilities. Mana values on board wipes are tricky. For a lot of mana, you can get a lot of benefit, like Decree of Pain, Deadly Tempest, or Austere Command, but if they cost too much, you might not be able to play them efficiently. The main thing we've learned, though, is that it's important to customize your board wipes to your deck. Crux of Fate in Dragon and Changeling tribal decks packs quite a punch, for instance.

The primary comparison for this five-mana board-damaging spell is Hour of Devastation. The Hour can hit indestructible creatures, but if we elect to burn down the house instead, we gain the flexibility of potentially making tokens. Hour of Devastation appears in 4,530 decks at time of writing, so I think it's safe to say the burning house has a burning home. Firesong and Sunspeaker, Toralf, God of Fury, Tajic, Legion's Edge, Torbran, Thane of Red Fell, and several more. With the tokens, it also finds a slot in Zurzoth, Chaos Rider and Brudiclad, Telchor Engineer. This is a nifty board wipe. Nothing unseats Blasphemous Act, but it doesn't need to. This card's cool, and it should see more play than Hour of Devastation because of that awesome versatility.

There are many commanders that like to deal incremental damage over time, like Mogis, God of Slaughter, Yurlok of Scorch Thrash, Kaervek, the Merciless, and Torbran, Thane of Red Fell. Any and all of those will love to add this Curse to a punisher strategy. It only hits one opponent, not all of them, but that gives these 'group slug' decks some extra dimension, so they can pinpoint and disrupt the most dangerous player who's trying to pop off, rather than only dealing area-of-effect damage. Curse of Shaken Faith is also a fun consideration for Ghen, Arcanum Weaver, but its greatest home is, undoubtedly, the new Lynde, Cheerful Tormenter.

This Vampire is extremely straightforward: it goes in low-to-the-ground Vampire decks. That's mainly Edgar Markov, who makes extra tokens for this card to sacrifice, and who plays tons of one-drops like Vampire of the Dire Moon and Indulgent Aristocrat in over 58% of decks. Outside of that, this card isn't stepping out into daylight anytime soon.

Welcome to baby's first Aetherflux Reservoir! If you're playing Storm or other Spellslinger strategies with lots of small instants and sorceries, this is a pretty cheap artifact that can build and build and build, and have a massive long-term repercussions on the game. Actual Storm payoffs like the Aetherflux or Thousand-Year Storm might still be the preference for optimized Storm lists, but those cards are pricey, so a budget Veyran, Voice of Duality player is probably really happy to have this other option. It's not just about the Spellslinger, either. This card provides long-term value with its second ability, and more than a few mono-red decks will be interested in that for the card advantage alone. Remember, this even lets you hit lands! I think Prosper, Tome-Bound is interested in this card as a value engine that his opponents always have to keep an eye on.

Light Up the Night

Blaze, Comet Storm, Banefire... red is well known for its X-cost mana-sinking burn spells. The difference here is that X is slightly bigger if you hit a creature or planeswalker instead of a player. Plus, if you're going to flash it back, you need planeswalkers whose loyalty you're willing to sacrifice. That's not an easy feat, even in Superfriends decks, because it can be pretty tough to keep planeswalkers alive in multiplayer. I think this winds up as a flavorful card in 'Chandra tribal' decks, but not much elsewhere. It's a sorcery, not an instant, and there are a lot of other, better X-cost mana sinks that don't have such hefty deckbuilding requirements to get full value out of them.

Reckless Stormseeker is yet another example of a card from this set with a very specific niche, and that will probably fare better in 60-card formats. It's hard to tell right now how exactly how much day/night cards will perform in EDH, but even if day/night functions optimally, these incremental boosts +1/+0 and +2/+0 with trample and haste just don't go a long way in EDH. This will see play in Werewolf decks, though even those players have to find the balance of old and new Werewolves to choose from, since there are quite a lot of them now. Niche card, cool art.

I'm a sucker for cards that depict a dragon egg. I find the idea of a big ol' egg eventually becoming a huge formidable dragon to be extremely flavorful.

Ultimately, though, I don't think this one has it in the cards. Guttersnipe is a Spellslinger powerhouse, but this is a much, much worse Guttersnipe. It can hit any target, which can pick off tiny creatures, but the buildup required makes this probably even worse than Electrostatic Field or Firebrand Archer in Spellslinger decks. As for Dragon tribal, I suppose they could flip the egg somewhat easily, but a 4/4 is a pretty small reward for a deck that prefers to cast big flying creatures, rather than lots of instants and sorceries.

End of the day, this card's last possible home might be Atla Palani, Nest Tender, who loves to break a few Eggs. Just consider carefully how many Eggs are in her 99, since cracking an Egg and flipping into another Egg can feel pretty lackluster.

When it comes to night/day cards, signs point to 'low' on their usefulness charts. Players rarely skip their entire turn, saving a Vedalken Orrery effect of some kind. Astronomer could provide a lot of card velocity if the circumstances were right, but I don't think the circumstances will ever be right.

When evaluating this spell, cards like Abrade and Thrill of Discovery leap to mind... but I think I prefer those other ones a lot more. The removal possibility is... fine? I don't think it's worth the second mode, which doesn't even keep you card-neutral. If you're interested in cool red modal spells, look for things like You Find Some Prisoners instead.

This is an uncommon Vampire that counts the number of Vampires you control, so I think it's inevitable for it to show up in Vampire tribal decks. Even if it does, though, I don't think it's great. It's inconsistent, and Vampire colors already have cooler ways to dispatch enemy creatures, ways that don't depend upon making enemies lose life, or about having a lot of creatures in play to even work in the first place. Sorry, Ambusher.

This common blows all the other uncommons out of the water. Red has had to deal with Anarchist and other much more restricted creatures that only grab one type of spell, but that rarely get back an instant or a sorcery. Archaeomancer appears in nearly 24,000 decks, and this is a nearly identical card for a whole other spell-tastic color.

Importantly, Archaeomancer is a Wizard, and the Elementalist is a Shaman. That matters a lot for the decks that like to abuse Archaeomancer's creature type, like Inalla, Archmage Ritualist and Naban, Dean of Iteration, and those account for a whole lot of the blue Wizard's popularity. But plenty of decks just loved Archaeomancer for that ETB ability, too, from Brago, King Eternal to Aminatou, the Fateshifter. Combos are abound with Archaeomancer and Ghostly Flicker effects, and now there's another four-mana creature to potentially join that fray, and find new tricks in other colors, or add fun redundancy to Izzet decks all over.

Even in the Darkness, There is Light at the End

What do you think of this new visit to Innistrad? Are you interested in the day/night mechanic? What are your thoughts on the red cards in this set, and do you think any may see wider play than I guessed? I know I'm extremely excited to add Moonveil Regent and Burn Down the House to several of my decks! Let me know your thoughts in the comments!