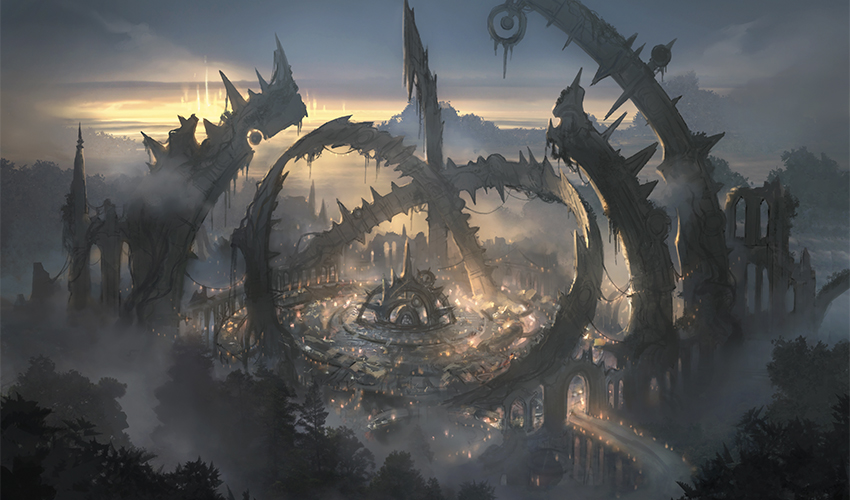 Be Careful What You Wish For

Welcome again to Innistrad, where all is not what it seems, and you must watch your step at every turn. The items at yard sales come with a hidden price, you notice out of the corner of your eye that the paintings and statues move as you pass, and the sun sets earlier each day. Everyday items such as books, scarecrows, or even pumpkins may not be as innocent as they first appear.

Some of the artifacts discussed in this review may also have appeared in previous reviews this week, but there's a lot to say about them! Here we have Geistflame Reservoir, which is essentially Firemind's Research 2.0.

Let's compare the two. Does Reservoir beat Research? Research requires that we cast two spells and pay two mana before drawing a card. Reservoir can always tap for two mana to impulse draw one card, but only once per tap. So, Reservoir is steady, reliable draw that can help you hit a missing land drop early, but Research can draw more cards once it has more counters. Does blue really need a weird, slow, stormy draw? I'd say no, and only 2,100 decks on EDHREC disagree with me. Point for Reservoir.

As for damage, both cards accumulate at the same rate. Research might more easily be able to hit more than one target in a turn, but only in intervals of 5. Reservoir builds up for one big blast against a single target. Let's call it a tie? I'll leave it to players to decide whether they want this card to be spot removal or a win condition.

Overall, Geistflame Reservoir fits in more decks and will more reliably give us a steady flow of impulse draw. Look for it in exile-matters decks, like Prosper, Tome-Bound, burn decks, like Torbran, Thane of Red Fell, and non-blue Storm decks, like Birgi, God of Storytelling.

I am so excited to make this card work. Typically when we see "when X dies, draw cards", we think of an Aristocrats strategy, but with a cost of Equip 3, I think that that would be both a challenge and a mistake. Let's lean into the word power and take a look at power-matters decks, plus any deck where we want to give a massive creature evasion, incidental lifegain, and card draw when it dies.

I can think of a few Golgari death monsters that might be interested, such as Skullbriar, the Walking Grave, Jarad, Golgari Lich Lord, Grismold, the Dreadsower, and Hogaak, Arisen Necropolis, who can all get pretty beefy. These decks are also likely to have some sacrifice outlets on board to make sure we get the card draw from our creature instead of eating a Path to Exile.

I'm also interested in Fling commanders, like Kresh, the Bloodbraided and Juri, Master of the Revue, who get large and like to sacrifice themselves to deal damage, not to mention cast a huge Chandra's Ignition. Drawing cards as they hurl through the air towards our opponents' faces seems pretty sweet. Don't forget to consider other black Voltron commanders, like Yargle, Glutton of Urborg. Who doesn't want their favorite Frog to become a flying Demon that draws us nine cards when it dies?

Heck yeah. Give me more three-mana rocks that do cool stuff! It's fantastic in a Werewolf deck, but let's imagine how it might fare elsewhere. As a refresher:

It's hard to say how often day and night will change on their own, but a player would need to outright cast zero spells on their turn for things to flip, so let's be conservative and say it only changes when we activate the ability on The Celestus. Three mana to loot and gain a life on a mana rock isn't a terrible rate, but it isn't great either. We might compare it to Bonder's Ornament, which is in a paltry 2,700 decks (I say 'paltry' because it was printed in every Ikoria preconstructed deck). We might want The Celestus if we're in a reanimator deck in 3+ colors that wants a way to discard and color fix, but I feel like I'm stretching here.

If day/night switches without us paying mana, then I'm in, but I wouldn't want to count on it. TL;DR, this new three-mana rock probably only shines in Werewolf decks, but there, it does shine nicely.

In discard or reanimator decks, this is a nice way to smooth out the early game and get some spooky things into our graveyard. As a quick comparison, I like Azor's Gateway for the card selection even if I don't get to flip it. Reanimator decks probably don't like the back half of this card all that much, though. When the Mirror flips, it's sort of a black Scavenging Ooze, which, even with a more expensive activated ability, is still useful, but usually against reanimator players, rather than being useful for them. Interestingly, 4,000 decks use Grimoire of the Dead, which has a tougher cost, a more powerful payoff, and a similar incubation period. I think to run this card I'd look at Demon tribal decks, like Rakdos, the Showstopper, Ob Nixilis, Unshackled, Shadowborn Apostles strategies, and especially Asmoranomardicadaistinaculdacar.

Traveler's Amulet (7,300 decks) is a respectable card. For one more mana, we get the option of grabbing a mana rock. That's a broad category, so we might be able to get a win-condition like Strixhaven Stadium, a combo piece like Basalt Monolith, a value piece like Midnight Clock, or a secret commander like Codie, Vociferous Codex. If we have a 'key' piece (heh) in our deck like one of these, then we might consider the Key. Glissa the Traitor decks might find a lot of uses out of it, too. Otherwise, a Wayfarer's Bauble is going to be more helpful.

Five mana to draw one card is a terrible rate. After that, we can only draw a card every other turn. So, that's eight mana to draw two cards over three turns. There's nothing mysterious about how bad that is, and tapping down one permanent every other turn isn't going to change that either.

A mana-filtering rock is a rare sight in Commander, but the ability on the backside is a sought-after one. Chromatic Lantern shows up in 76,000 decks, and Dryad of the Ilysian Grove appears in 32,000 decks. However, these come with other utility and a lower mana cost, which Mystic Skull does not. Seven mana for the ability not to care which lands tap for which color is far too high a cost.

If you see one of these, don't take it home and hang it up in your barn, and don't put it in your deck.

This pumpkin might be a neat inclusion for Glissa, the Traitor decks, who are already playing quite a few of these little artifacts that sac themselves to draw a card. That's... about it, though. Actually, you know what, maybe a Halloween themed deck would like it, too!

This is only the 37th Scarecrow to consider for a Reaper King deck. There are plenty of mediocre ones, so this might bump something else worse out of a list, like Thornwatch Scarecrow, or help Scarecrow purists that don't want to run Changelings.

Bear Tribal decks, like Ruxa, Patient Professor and Ayula, Queen Among Bears, are inherently creature-centric that sometimes run the risk of over-committing to the board. Stuffed Bear gives us something that might stick around after a board wipe, and it's pretty cheap to activate. Seeing a friend taxidermied might make our other Bears a bit salty, though, and frankly, those commanders don't even get to synergize their other abilities with Stuffed Bear all that much anyway. Mirage Mirror and Mirror of the Forebears are probably a more useful tool at that point.

This evasion is very specific, and the buff very minimal, so I'm low on this Equipment. But, for the LOLs, throw it on a Questing Beast and only creatures with 3 power can block it! Sadly, I can't even recommend it for plague protection, due to the poor air seal.

The auto-attach is nice, but the small buff and heavy Equip cost are not. Hard pass.

Hostile Hostel initially grabbed my attention. I appreciate that they're trying to give us the Westvale Abbey vibe on a new card, and whenever a card says each opponent, my heart skips a beat that it might scale well for multiplayer. Unfortunately, the Hostel doesn't.

It's slow to flip, only lets us sacrifice a creature as a sorcery, and once it flips it's still incredibly slow to exile enough creatures from our own graveyard to do a significant amount of damage to our opponents.

Alright, so what nickname have y'all settled on for the new #MTGmidnight dual land cycle? Your extremely low bar to beat is currently "The Slowlands". #wotcstaff pic.twitter.com/2GTkZtu57e

Regardless of what we call them, many players seem to feel that they're too slow for their taste. They are similar to the "tango lands" (admittedly another tricky nickname for a land cycle), like Canopy Vista and Cinder Glade, but check for any two lands instead of just basics. However, tango lands have basic land types, which means they're fetchable. That's extremely helpful to fix colors, whether with fetch lands, Krosan Verge effects, or with spells like Three Visits, and that usefulness is probably more important than the chance to come into play untapped a smidge more often. Tempo is important, so unless you care a lot about Cycling, I think it's also probably fair to say these could potentially eke out a bit more value than the Irrigated Farmland cycle from Amonkhet.

However, the slowlands (or whatever you'd like to call them) are great replacements for always-tapped Guildgates, Vivid lands, 'gain 1 life' lands, like Dismal Backwater, or any other dual lands that always come in tapped. I think a robust conversation could be had about whether these edge out Temples, like Temple of Malice, and whether they're more useful for multicolor decks than Sungrass Prairie & Co. Shocks, fetches, pain lands, check lands, and Battlebond lands, like Bountiful Promenade, definitely remain at the top of the heap, but these are an interesting and welcome addition to the mana-fixing conversation.

What do you think of these cards? Are you adding any of them to your own decks? Let us know in the comments below!