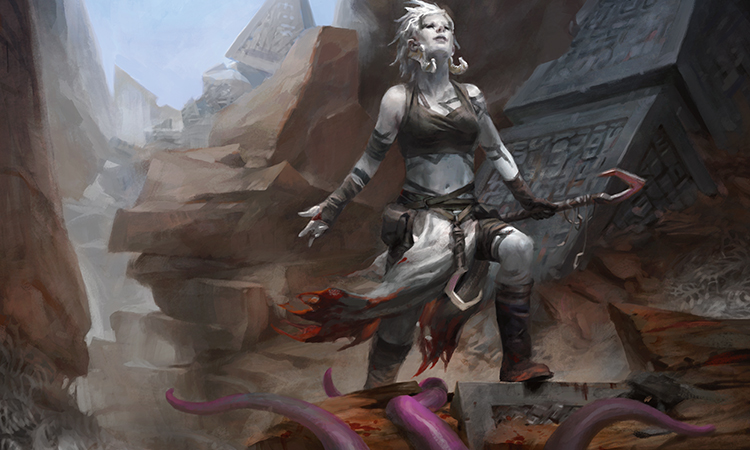 Since this series is about breaking down the results on EDHREC, why not take it one step further and take a deeper look into a popular commander? Ayli, Eternal Pilgrim is the most popular Orzhov commander on the site with 538 decks (at the time of writing). As a commander, she lends herself towards a sac-and-recur strategy, providing a sac outlet and removal as long as you have enough life. She’s ahead of Athreos, God of Passage who, in my mind, seems like he’d be a better commander for that strategy since he provides a means for recursion which is generally harder to come by than a sac outlet (or conditional removal for that matter). She’s also above Karlov of the Ghost Council who would be her competition for a life gain commander, and I think he also outshines her. But Ayli has a sweet little secret, she’s a cleric, and while the other options of Tymna the Weaver and Ravos, Soultender make a powerful combination, they lack the raw power that Ayli can bring to the table.

Learning how many people play Ayli as a cleric tribal commander requires a little filtering. Ayli’s stat page makes it difficult to tell that there is a tribal deck hiding behind the other cards. One of the biggest giveaways is that even in the Top Cards section nothing has much over 60% inclusion rate. A deck as popular as this one should have a predictable selection of common card; however, to see the cleric deck through the generic goodstuff we need to pick a card (or cards) to filter on. There’s a little cheat card I like to use with black tribal decks; Patriarch’s Bidding. This card is phenomenal and I personally believe it belongs in almost every black tribal deck; however, it shouldn’t appear in a generic goodstuff deck (what’re you gonna name, Giant?). Filtering by that card returns…22 decks. Wait, seriously? Woah. That’s low. Ok, we need to pick something else then obviously, because while this has filtered us down, it’s gone a little too far and now we don’t have a big enough sample size to really get a good idea what these decks are playing. My next pick for good in tribal, bad in goodstuff would be Rotlung Reanimator. Voila! 72 decks, which is a much more respectable number. Just to make sure I wasn’t sampling any “gimmick” decks (using that term very loosely here) I added a filter to remove Shadowborn Apostle. Turns out we end up with 72 decks still, which is actually interesting in its own right, but that’s a topic for another day perhaps.

With our filter in place, we can take a look at what we are working with, and right away I see an issue. In this case I think we may have a pretty strong argument for Precon Effect taking place. One thing to note before I get into the weeds here: when you filter on EDHREC do note that it takes into account the filter when calculating elements like percent inclusion, so that number reflects only the decks that remain after applying the filter.

The first card on my list doesn’t have the highest inclusion of cards on the list, but I think it’s the least potent. Celestial Gatekeeper is an understandable inclusion on the surface; this is a cleric tribal deck and this card specifically references clerics in is text. That’s means it must be an auto-include, right? Look, 62% of people are playing it, they must know what they’re doing, right? Right? I don’t think so. While Celestial Gatekeeper does reanimate two clerics for free when it dies, the cost is that it can only do so once, and it’s not a great bargain for a five mana 2/2. The biggest issue I have is that in black and white the deck has access to the best, cheapest reanimation in Magic, but here we are paying five mana and requiring a sac outlet (which, fortunately, our commander is, but that still requires a second step compared to other reanimation) to get only two creatures back. To top it off it’s not as though the Gatekeeper even has that much toughness, so when we do sacrifice it to Ayli we get a paltry two life. We can do better. Much better.

My second suggestion for extraction from the deck is Mother of Runes, colloquially known as mom. In this deck mom is presumably serving as some slight protection for our powerful creatures. But I would like to know what we’re protecting them from? This isn’t a voltron deck, Ayli costs two mana, making her extremely easy to recast a squillion times when she dies. And as a swarm deck (essentially) I’d be surprised if having any one creature die is really going to set us back. So what service is mom providing? Probably just a false sense of security. So 81% of decks are including her for that purpose Sam? She’s gotta be really good. See, that’s the thing though. She’s probably very good, once in awhile, which makes people want to believe. But when I go to build a deck, I’m not aiming for my cards to be good “once in awhile” or “in this specific scenario I encountered last week”. The worst reason is “because my meta is full of <blank>”. Look, that’s fine, but 81% of people’s metas can’t be overridden with exclusively targeted, exile-type removal. That math just doesn’t add up. Especially not if you’re actually playing a well-tuned Ayli deck that floods the board with creatures. Your meta will 100% adapt to this and start playing more mass removal, meaning that mom becomes even less useful.

The final card I’d like to advocate cutting from Ayli cleric tribal lists is Battletide Alchemist. 79% of decks are including this card, and I’ll be honest, I understand the appeal. It could potentially save you from a lot of damage from wide sources like token decks, and it’s an entertaining way to turn off Purphoros, God of the Forge. My argument for removing it is that for its cost (five mana) it’s not a resilient enough deterrent to warrant the investment. As a creature it’s the permanent type most susceptible to removal. Additionally, even if we’re really over-extended into the board (the time when it’ll be most effective) we’ve then just further encouraged an opponent to wrath the board. I prefer to discourage opponents from blowing up my well-crafted board state.

My first replacement is my initial filter card: Patriarch’s Bidding. This card is incredibly powerful in a tribal deck; especially a tribal deck looking to sacrifice its creatures. The fact that only 24% of the tribal decks are playing this card is just unfortunate. While it doesn’t have the removal quality of Living Death it is potentially even more one-sided in that it can get back every creature in your graveyard, while generally getting opponents back a couple at best. I don’t know what the average number of creatures with matching creature types is in non-tribal decks, but it can’t be that high.

Martyr’s Cause is a card that isn’t even represented in enough deck lists to show up in the non-tribal Ayli lists, and I think this card is a complete sleeper. It is a free sacrifice outlet, something that is extremely useful in decks that run Grave Pact-type effects. The card’s ability doesn’t target, meaning it gets around shroud, hexproof, protection, etc. It also says “a source”, which means when the Mizzix of the Izmagnus player goes to cast a huge Comet Storm, you get to save yourself from it for the low cost of a single creature. The effect also allows you to pad your life total, so unlike some other free sacrifice outlets such as Altar of Dementia or Ashnod’s Altar you aren’t just spinning your wheels when you sacrifice the creature on an opponent’s turn. Those outlets have useful effects, but keeping your life total high with Ayli is even more important as it allows you to maintain the option of activating her second ability that much more frequently.

Finally there’s a card that I’d like to promote from it’s 27% inclusion rate, Custodi Lich. This card has quickly become one of my favorites from Conspiracy: Take the Crown for two reasons: first, I love edict effects in commander for their ability to get rid of indestructible, hexproof, and shroud creatures. Second, the fact that it draws you a card on top of that is fantastic. I think what people underestimate about this card, especially in a creature-based strategy, is that its edict effect triggers “whenever you become the monarch”. So even if an opponent hits you and takes the crown (pun intended), you are actually happy with this as it gives you an opportunity to re-trigger the edict portion of the card. As a smaller, yet still salient point, I tend to like edict effects the more a deck runs them. So in a deck with both Grave Pact, Dictate of Erebos, and Barter in Blood, I like Lich all the more.

I’d like to take a moment to discuss my view on what are traditionally referred to as tribal decks, as it impacts some decisions in the following list. I personally believe that as long as approximately 90% of cards in a deck make reference to the tribe in some way, it can be called tribal. That’s not exactly a hard number, but including Blood Artist and it’s non-cleric ilk, which are incredibly powerful in this type of deck, is fine, so long as the rest of the deck plays as a cleric tribal deck. Including Goblin Matron and a five card goblin package in your Wort the Raidmother tokens deck doesn’t make it goblin tribal. I think this is a pretty reasonable arrangement, but I am interested where other people draw that line, so let me know. That said, here’s the list:

That wraps up my offering to Ayli. Hopefully you enjoyed my take, and that I offered a couple of new cards that you may not have considered before. As always let’s take to the discussion section below to let me know your thoughts.