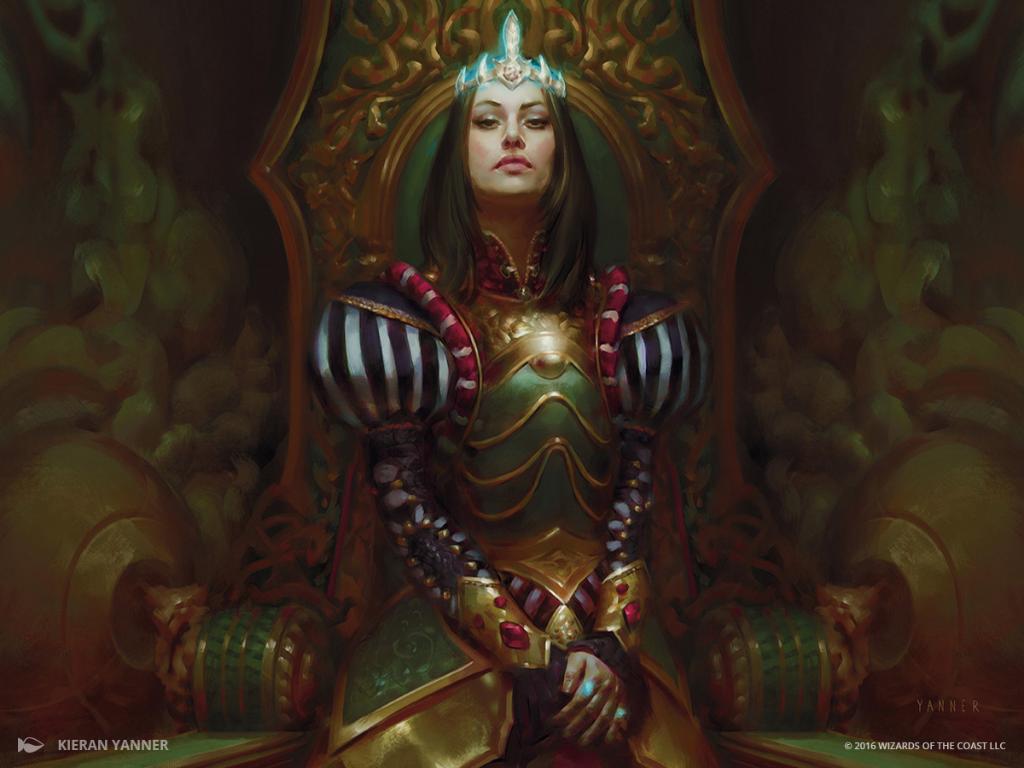 While the new commanders have started taking off, I don’t feel compelled right yet to make them an offering. With people becoming more and more aware of this wonderful site they’re also becoming better at building around new commanders as they come out. People have nailed the important stuff for Hapatra, Vizier of Poisons, with all those -1/-1 counter goodies. Neheb, the Worthy as a tribal commander has so few options that it’s hard to miss the good ones. The list drops off pretty hard from that point.

However, last week I mentioned some cards I was very excited about, so this week I’m going to put that excitement to work and look at a deck that I think really benefits from the most recent set: Queen Marchesa.

Let’s start by taking a look at how people are building her. Oh, wait, we need permission to do that? Fine then, I’ll just start a petition to The Queen:

Her Royal Highness, Marchesa, First of That Name

You don't know me, but my name is Sam, and I am a scholar from a distant land. I have heard from travellers in your court that your library is overflowing wonderful volumes concerning the control and direction of managing the populous. I also hear you have recently completed the storied verse of your surprise triumph over those who sought to harm you in your peaceful rule. Ours is a kingdom of much strife, and I wish to learn the ways in which you have managed to derive such tranquility in your kingdom. I would also wish to review the architectural manuals of your library, that I may better understand the construction of your forts, and how such construction itself has been said to be enough to deter those who would usurp you.

I hope that you deem my entrance worthy, and as a token of my gratitude may you find enclosed my account of our kingdoms success in such endeavors, however limited, that you may see I am here in good faith, and may use it whether or not you grant me such glorious access. The first offering I wish to make to you is among the greatest of its kind. This victory, known as the Approach of the Second Sun is so great that it had the power to end all conflict in our people’s favor after just the second invocation. While for us it was a full seven years before we were able to invoke it the second time, I know that with your resources as the monarch of your people you will certainly have the resources to invoke this powerful spell much more rapidly. As one who abhors true violence I believe strongly that this invocation can fit closely to your style of benevolent rule. My second offering is one which you may find very hard to believe, however I beg you take my word as to its veracity. You are obviously by now finding yourself wondering upon my land of origin. I trust that you will use the information I am about to provide in strictest confidence, but I am not from this world. I am from an entirely separate plane, one quite different from this one. There are more like me, those who can travel between worlds, one of them, Gideon of the Trials I believe could be of great help to your cause. I have seen Gideon’s mere presence prevent catastrophic losses. Such unshakeable defense is immensely useful when there are so many who would plot your downfall as monarch. Additionally, with the defenses you have rumored to possess it should not prove difficult to keep a single warrior from harm. With Gideon at your side your enemies must deal with him before coming to you. This in its own right provides you strategic advantage in navigating their stratagems. My final offering to you, great Queen, should serve as further proof of my presence on other worlds. On a plane known as Kaladesh there exists a peculiar creature known as a gremlin. These creatures feed on the aetheric energies of artifacts. I can teach you how to summon them, then with some training you can Release the Gremlins upon your enemies' artifices. They will not only destroy most vexing objects, but in return for providing them with said feed they allow themselves to be kept as pets in your employ. I have heard of the great strength of your armies, and know that you can Assemble the Legion quite easily as a method for combatting those enemies that do not fall into your peaceful rule. Gremlins, one fed, will provide similar, more powerful, and even complimentary service to that of your Legion.

Her Royal Highness, the Queen, Marchesa,

I am writing to you with my sincerest thanks for allowing me to visit your phenomenal library and conduct my research. I hold deep regrets for the manner in which I left. My haste was not due to a lack in your fine hospitality, but a disturbing occurrence on the night of my departure. Possibly due to some mix-up I was awakened at midnight by a number of your armed guards. They informed me I was to be taken to your dungeon, and attempted to place anti-magic shackles upon me. Thankfully they must have miscalculated my martial prowess and I was able to subdue them and leave before further confusion ensued. While I’m certain these guards must have acted on mistaken premises, I’m sure you can comprehend that, given the circumstances, I thought it prudent that I depart posthaste to a place of safety. I know you’d never have meant me any harm or ill-will, and would never attempt to hold an innocent against their will. To demonstrate my continued gratitude for your hospitality, I wish to instruct you on a number of deficiencies that I have come across in my examination of your, quite remarkable, library.
The first thing I noticed upon entry is the prevalence (greater than 40% of your archives reference it) of an ordinance known as Marchesa's Decree, no doubt named for yourself. While I find the principle sound, and see that it does reiterate your power as the monarch of your people, I don’t believe the deterrents that it employs to be stern enough to warrant the high, up-front investment. You have at least three strong other methods by which you proclaim yourself the monarch In the form of the Skyline Despot held in your menagerie, the Custodi Lich, a formidable force for preaching your right to rule, and your Knights of the Black Rose, with whom I am now intimately familiar. Not to mention that you yourself proclaim your rule by your presence alone. I believe that this Decree is simply not worth the effort. Second, I wish to remark on the on the fact that over a quarter (28% to be precise) of your archives remark on a Boros Charm. No doubt the origin of the word Boros is lost on your scholars, though I know of its significance. While offworld magic may indeed be powerful, I don’t see the utility in being able to make your, let’s be honest, disposable armies, indestructible. And you can’t convince me its inclusion is of any other relevance, the other ways this charm can be invoked mean nothing to the large-scale struggles and politics of maintaining the throne. While I realize this charm has proven itself useful at times, I believe that simple possession of magics with more broad-sweeping applications would be more useful. Your highness can always afford to bide her time and wait for her armies to recover before striking her enemies down, thinking otherwise would be un-queenly.

On The Power of Gods, My final words for you are of a cautionary note rather than as rebuke. I see that a full 40% of your most recent tomes make reference to a growing cult of a goddess known as Oketra the True. Her name is likely more familiar to me than it must be to you, and I caution you. While her ability to recruit followers is very strong, and requires such minimal commitment on your part to her alignment towards white mana, I don’t necessarily believe that she is the strongest investment of your resources. Her presence itself grants no boon to your people, a fact that I find highly suspicious in one who asks such devotion of her followers. Additionally, I believe that there may be other gods who find your devotion to Oketra offensive, and who have been known to recruit stronger worshippers. This all I say out of respect for your position, and realize that you must have undergone extensive deliberation to allow such an affiliation to occur. I merely remind you to always keep an open mind, and that the newest trend may not always be the best.