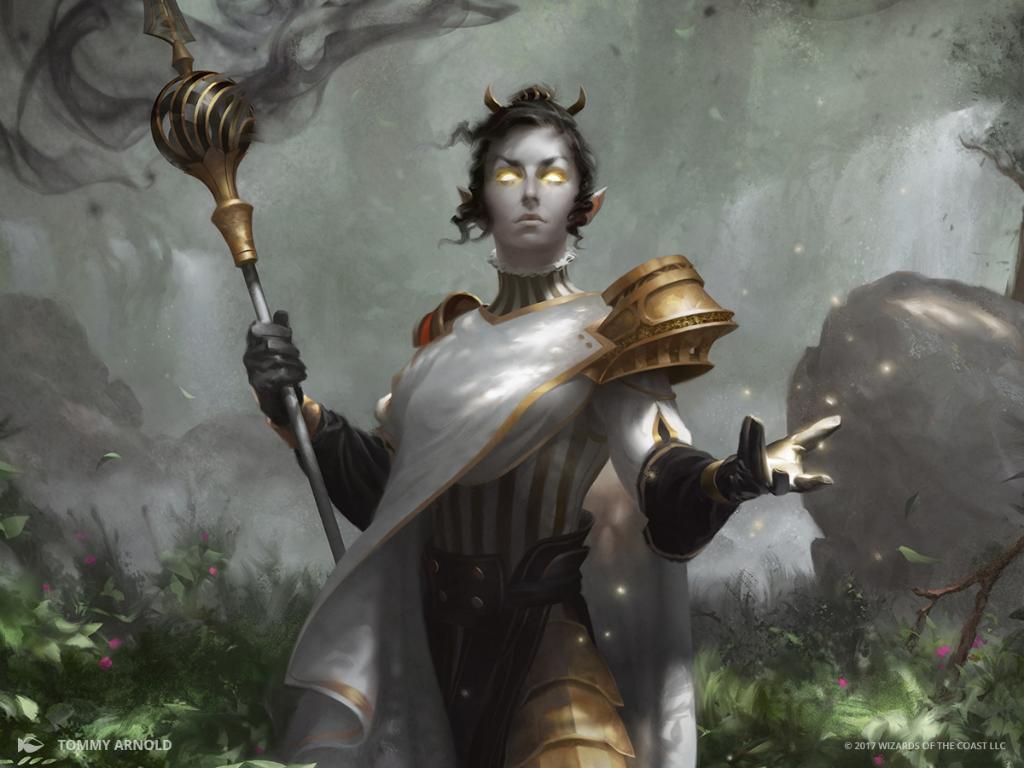 Ixalan has almost crashed ashore and you know what that means? Set reviews! I’ll guide you through the winding plains, staying out of the way of giant dinosaurs, and finding the best white cards in Ixalan for Commander. What cards will conquer your playgroup in the coming months? Let’s explore together!

Ashes of the Abhorrent White gets another graveyard shutdown card. Somewhat similar to Grafdigger's Cage, Ashes of the Abhorrent stops flashback spells like Past in Flames and Snapcaster Mage and abilities like unearth and embalm. Luckily, Ashes of the Abhorrent also gains you life whenever a creature dies, which can help against decks that constantly sacrifice creatures. It’s a nice bonus effect, but I don’t see this card becoming a key lock piece for stax decks and it might not useful enough to be played elsewhere. However, it is a great silver bullet if you really want to stop that one deck in your playgroup. I want this card to better than it probably will be. I say that because this type of effect is hard to come by in Magic. The cards that do similar things to Axis of Mortality either cost more in total, like Soul Conduit or Reverse the Sands, or force you to sacrifice it, like Magus of the Mirror. The main problem with this card is that you have to wait until your next turn to get anything from it, and it’s never certain that your opponents would even let it stay on the board for that long. If it does though, it can be a great political tool. If you can give this flash via a card like Vedalken Orrery, it becomes much better. That being said, I would certainly put this in a Selenia, Dark Angel deck in a heartbeat. That deck hasn’t had a new wincon since Near-Death Experience. This card is going to have some use in Commander outside of the expected dinosaur deck. If you can give it indestructible, like sliding a Darksteel Plate on to it, and then start punching Bellowing Aegisaur with Walking Ballista or the true enrage commander Marath, Will of the Wild, you’re going to make your entire board dino size. Sun Titan’s back in weaker vampire form! Even though Bishop of Rebirth can only get creatures with converted mana cost 3 or less, that’s not a big drawback in this format. Sure, it can’t fish fetchlands or Sword of Fire and Ice out of your graveyard like Sunny T can, but there are a whole bunch of great creatures it can resurrect. Of course, it’s going to be a good option in an Edgar Markov deck since a lot of the best vampires are at the low end of the mana curve, but I can also see this pulling out Eternal Witness or Snapcaster Mage in a goodstuff deck. No, Ixalan's Binding won’t shut down a player’s commander if they chose to move it to the commander zone when you exile it. However, this is still a useful tool that adds a little bit of upside to cards like Banishing Light. It’s another option for white decks that want broad forms of removal. Another variation on cards like Thalia, Heretic Cathar and Imposing Sovereign, Kinjalli’s Sunwing at least has flying, which means it could have a home in flying based decks, like Isperia the Inscrutable. If you’re running a deck that wants to slow down your opponents, this might be the best card for that slot, but not by much. Legion's Landing is going to see some play in Commander, but I’m not sure how much. One thing that I think a lot of people are overlooking with the legendary enchantment cycle in Ixalan, especially when it comes to Commander, is that the cards are ramp spells with odd ways to trigger the ramp. Legion’s Landing might be the easiest of the five to trigger, given that you get a creature with it. Token decks that don’t play green might want this, given that the backside is a rehash of Kjeldoran Outpost without having to sacrifice a land. The only mono-white legendary creature in the set is best suited in the 99 of a vampire deck than it is as the commander of its own deck. Mavren Fein, Dusk Apostle can make a token if it attacks on its own, but the sticking point with Mavren Fein, Dusk Apostle for me is the fact that it says “one or more”. If it had a clause like Militia's Pride where you get the trigger off each vampire, then maybe you could run a janky deck with him at the helm. However, this guy is going to be besties with Edgar Markov in many builds.

Priest of the Wakening Sun There isn’t much to say about this card, but Priest of the Wakening Sun is a tutor effect so it needs a little attention. Too bad there aren’t too many dinosaurs at the moment that are worth the search, but this might get slightly better as time goes by. Settle the Wreckage rewards you for playing it against the right player and can really punish you if you play it against the wrong player. Against three, four, or five color decks, Settle the Wreckage can be just as one-sided as Angel of the Dire Hour, because that player is unlikely to have a large number of basic lands to pull out in their deck. However, this gets worse against players with one or two color decks, where the possibility of them getting ramped hard after an attack is high. Still, one thing I like about this card is that you can use it on yourself. Attack with a bunch of disposable tokens and end up way ahead of your opponents land-wise. Tocatli Honor Guard is Torpor Orb number two or three in stax decks, competing with Hushwing Gryff, though I’m not sure how many of this effect those decks want. Stopping enter the battlefield triggers can be very powerful in Commander, since a lot of the best creatures in the format are the best because of their enter the battlefield triggers. Negating Craterhoof Behemoth is reason alone to see how good it can be. Shutting down these triggers though will put a target on your back, so keep that in mind. This is probably the best dino for the dinosaur deck since Wakening Sun's Avatar can act like a Plague Wind in most cases. Any type of one-sided Wrath of God is always worth a look at, though the high mana cost might make it restrictive for most decks, where it is similar to Phyrexian Rebirth.

The Sun Has Set

What decks and strategies have most to gain by setting sail for white cards in Ixalan? I think Edgar Markov has a whole new set of underlings to deploy. Of course we can’t forget the oncoming stampede of dinosaurs. Jurassic Park fans get a bunch of exhibits to let loose. Blast from the past Selenia, Dark Angel inches closer to having a full deck finally. And finally, stax players get more toys to toy with all of us.

What white cards in Ixalan did I miss? Please shed some light in the comments below.