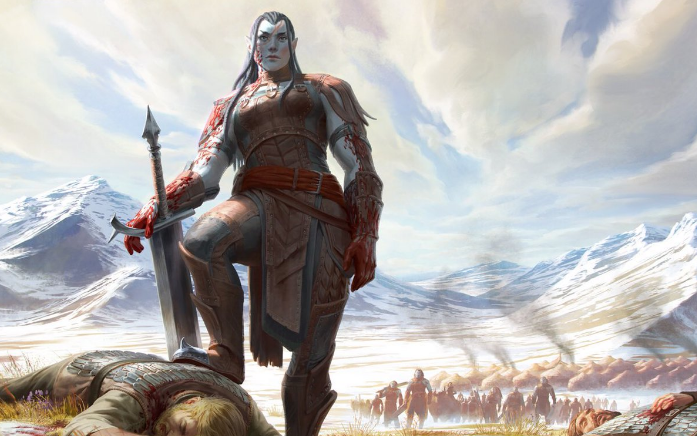 You slam Darigaaz Reincarnated onto the table and smirk. You smell fear in the air as you shuffle 59 cards and the other three players shy their eyes away. Since you have prepared lots of powerful creatures to plow over the competition, you assume the game will be quick. You may have even prepared against the competition by reading through a Brawl article on EDHREC. As a few lands pile up in front of each player, understanding washes over you; everyone has brought big creatures. You can't attack without losing your best defense. Even Darigaaz Reincarnated rarely seems a profitable play. You're stuck at parity.

If you've ever had a scenario like this happen to you, then you've come to the right article. Identifying the cards that are huge role-players in a format is critical to success.

Quadrant Theory, popularized by Marshall Sutcliffe of Limited Resources, is discussed most often as a part of Limited Magic. Casual formats and Limited formats often involve bashing one creature into another. This effect is amplified when you consider modern card design sensibilities. Wizards of the Coast has incentivized creatures as the focus for deck construction. Creatures have been pushed further into powerful realms they haven't before seen. Converted mana costs became cheaper and enter-the-battlefield abilities became powerful enough to stir some pots.

The quadrant that surfaces so often when considering such powerful creatures is "parity." Specifically, parity is the state where no player has established "a dominating board position," as Marshall mentions in the above-linked article. This is the quadrant of board stalls and "draw-go" gameplay. This is the most important moment in a game of Brawl.

It isn't that parity is a unique situation for Brawl matches compared to EDH or another format, like Draft. Important to note, what I refer to here is mostly the case for multiplayer Brawl, as that is most of what I have played. Parity exists in every format of the game. Brawl has a particular issue with it, however. The difference lies in the fact Brawl games will almost certainly reach parity, and that the cards that win the game from there don't always do so directly.

For example, River's Rebuke is a powerful card that can win games, but it doesn't do so without the help of creatures. In EDH the types of cards that win games can sometimes be cards like Cyclonic Rift, which has much in common with River's Rebuke, but more often the game-winning cards are things like Exsanguinate, Craterhoof Behemoth, or any number of infinite combos. Meanwhile in one-on-one Limited, victory hinges on powerful individual creatures like Serra Angel and well-timed removal to back them up. Brawl is somewhere in-between. The cards in these Standard sets are rarely powerful enough to finish multiplayer games all by themselves.

To the Other Side

Prioritizing cards that win games by themselves is important. It always is. The cards people are currently playing that win on their own might already be obvious, but is important to restate and explain why they are so powerful. Torment of Hailfire, River's Rebuke, Sandwurm Convergence, and Song of Freyalise are all cards on the Top 100 EDHREC Brawl cards list, and are worth mentioning as powerful parity-breaking cards.

Torment of Hailfire sees play in 377 Brawl decks in the EDHREC system. Torment has won me every game I have played it in, in every format I have played, with the exception of one, where I stumbled early and used it as a last-ditch effort to speed-bump my opponents. If the table doesn't concede on the spot, then a Torment will likely cut opponents off enough resources or life to clinch victory for you in other ways. It can be a dead card early on, but as we have already discussed, games can take a while.

Let's discuss some other cards that fill a similar role. River's Rebuke slots into a whopping 681 decks. This is the highest number of any card that breaks parity. Rebuke may not be as powerful as Cyclonic Rift, but taking out one player may be the leverage you need to focus on the others. Notably, comparing this to mass removal like Fumigate (which is in 577 decks) shows us what matters here. River's Rebuke can save you from plenty of non-creature shenanigans. Holding onto your threats is essential to Rebuke's power. It's not enough to merely discontinue the moment of parity, but to break through it to actually win the game. My aim is not to diminish the value of restarting the board with a Fumigate, but simply to highlight the necessity of both breaking a board stall and winning as a result of that break.

Sandwurm Convergence is a difficult card to analyze in the Brawl metagame. Convergence will win you games in a vacuum, but living with River's Rebuke and Dinosaurs that outsize your Wurms is a real thing to consider. I think there is a valid reason for it to be played in 380 decks, but beware of relying on this card.

Song of Freyalise I underrated in all respects. After playing plenty of Dominaria Limited, I have seen the power. It usually doesn't even matter if you see it coming. When the Song drops, it's either too early to play around it, or too inexpensive in the late game to slow down the person playing it. Both the beginning chapters and the final chapter of this Saga are all relevant, whether early or late in the game.

There are plenty of treasures hidden in Standard that have brutalized local game stores. Specifically, I recently played a Darigaaz Reincarnated goodstuff Brawl deck. Going into it I was already prepared for parity gameplay, but I got wrecked by Demon of Dark Schemes. There are plenty of ways to recur big bad Demons like this Schemer, so it kept coming back again and again, to nullifying my kicked Josu Vess, Lich Knight and repeatedly Ravenous Chupacabra-ing my commander back to egg-counter-land.

Demon of Dark Schemes won my opponent the game, but the unsung hero was his decision to play a high density of recursion spells. Because of this game, I wanted to note a few cards that deserve more limelight in this format. Be they parity breakers or recursive engines, it becomes important to note why certain cards over-perform in order to understand what future rotations and additions could do to the format.

Open into Wonder and Tempest Caller play similar roles, both to one another and to the more popular River's Rebuke. Manipulating the game state to make these effects advantageous is easy so long as you are at parity and not on the back foot. That distinction is important; many of these cards are overlooked for good reason. The floor (i.e., the worst-case scenario) here is low. Playing Open into Wonder or Tempest Caller on an empty board is pretty bad. That being said, I think the low floor is rare enough that they are still worth considering, especially your deck is built to utilize them. Tempest Caller has worked well in my Nissa, Steward of Elements deck, and Open into Wonder has a home in creature-based Muldrotha, the Gravetide decks or Admiral Beckett Brass.

Insult // Injury and Angrath's Marauders are cards I don't leave home without. I wouldn't be able to say enough good things about them, and the fact that they each only see play in a little over 100 decks just seems low. They go especially well with the now-unbanned Rampaging Ferocidon. Even in worst-case scenarios, Injury is a bit of removal and the Marauders can trade for something big.

Bellowing Aegisaur sees play in little other than Dinosaur decks. Token decks and small creature decks are common in white, where big-booty-Aegisaur will find a home nicely. When we talk about breaking parity, we want to make our attacks profitable. Threatening to anthem your team with each of Aegisaur's attack can dissuade blocking very nicely. You may also be able to make profitable attacks if you keep your Dino friend back on defense, because it dissuades any crack-back.

Recursion effects are way better here than I have seen them perform in EDH. This is likely because the threats are not quite game-winning in the same way as in EDH, but have still a much higher power-level than the rest of the cards in the format. Liliana, Death's Majesty, Wildest Dreams, and Flood of Recollection all seem like important cards to consider. These cards you wouldn't want a ton of, but having one or two will likely become a staple among Brawl decks I build. Some are seeing more play by EDHREC numbers than I expected, but I have not seen manyout in the wild. This could be a coincidence, though, and I may be behind on this idea.

Recall the Time We Cried

Normally, since I mentioned my Darigaaz deck above, I would probably slot that in here at the end of the article, but as I told you, I was handed my rear on the back of a Demon of Dark Schemes while playing my Darigaaz deck. So I thought I would include my Grand Warlord Radha list instead, which contains a few of the cards mentioned above to help break through those parity board states.

This list is all about attacking when you can. Even if you lose a couple creatures, the tempo of getting so much mana can give you the edge you need. Repeating Barrage gives repeated card advantage with lots of extra resources you acquire. X spells like Jaya's Immolating Inferno and big mana sinks like Shivan Dragon can win games out of nowhere.

I hope you enjoyed the article. Did I miss any cards that you think are perfect for breaking parity? What cards have won you games all by themselves? Let me know in the comments and give me a shout out on Twitter @rickworldnews if you want to talk Brawl on a daily basis.