Librarian Lore — A Matter Not So Black and White 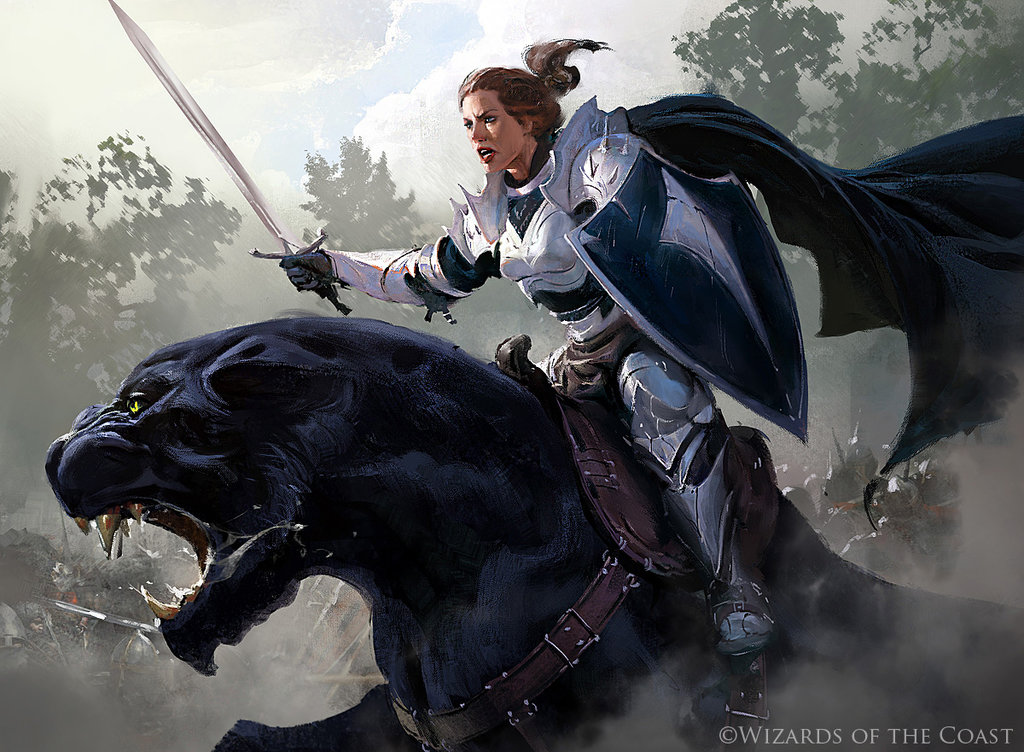 Welcome back to Librarian Lore faithful readers. Today we’ll be exploring the legend and lore of the knight and see if they are so worthy of their title of hero in shining armor after all…
When most kids had their favorite superhero growing up, yours truly was enthralled by the likes of St. George and the Dragon and Sir Richard the Lionhearted. I remember being seven years old and finding this book in the library and being enthralled with the story of good vs evil and the hero overcoming the monster. Margaret Hodges really brings the story of St. George and the Dragon to life with beautiful watercolors.

But there’s something odd about Aryel, Knight of Windgrace She’s White and Black. Now, white is a fairly standard color for knights being representatives of order, valor bravery and faith. Things that represent the storybook knight like the one from my childhood fable. But where’s that black coming from? Well, from a mechanics perspective knights have been black as long as they’ve been white. It’s a rivalry as old as Alpha. and it has repeated, and here we are again. It seems friends that this is an eternal battle on the worlds' stage. Black and white are two colors that couldn't be more opposed so what does their unity mean in our knight commander?

The Lighter Shade of Gray

When these two colors are brought together we often see a legend who well...
Kambal, Consul of Allocation
A corrupt politician.
Ayli, Eternal Pilgrim
A vicious cultist
Teysa, Orzhov Scion
or perhaps most damning...A lawyer!
So mechanically Aryel is Orzhov colors because it allows her the highest percentage access to her tribe but can we glean from the lore why she is the way she is? She certainly seems like your typical gallant hero defending Urborg from the Cabal and keeping the festering pit of corruption and its powerful evil artifacts out of the hands of those who could most abuse them for terrible things. But that's we know about Aryel. I want to posit a theory on why she has that black mana symbol that has nothing to do with her character as an individual and everything to do with her environment. I want to draw your attention to the quote on Urborg, Tomb of Yawgmoth "Yawgmoth's corpse is a wound in the universe. His foul blood seeps out, infecting the land with his final curse." I believe that Aryel is not, in fact, black aligned by choice or moral decision but is in fact corrupted by the very landscape itself. Yawgmoth's final curse is a seeping poison that rolls from Urborg and corrupts even the most valiant hero of good over time. Perhaps in the future we will see the Knights of Windgrace succumb to the influence of one of the multiverse's most ancient evils time will tell.

In the immortal words of Monty Python, and now for something completely different! Well lore speculation is fun I like to bring something educational to every article and as is often the case it always starts with a question that I myself have. "Are there still knight orders around today?" S The answer is yes in fact one of the most famous in history is still around and still doing its thing...No not swinging swords or crusading...The Knights Hospitaller were established in 1099, the intent being to protect pilgrims on their way to Jerusalem providing care and relief to those on the journey. Today the Sovereign Military Order of Malta (SMOM) conveniently based in Rome because they like to be confusing, is a worldwide humanitarian organization which as recently as 2013 re-opened its original 1099 hospital in Jerusalem. The St. John's Eye Hospital serves as the predominant hospital for optometry in Jerusalem as well as its satellites in the Gaza Strip providing healthcare for the region. Several orders under the banner of the knights also serve as ambulance services and provide medical aid across Europe and the globe.

Yes friends, a deck. I'm not going to hide the fact that I'm not a great builder but I did custom make a list myself so, let's lead some knights into battle!

So what exactly is this deck doing? Well it's a pretty standard list I admit, I'm not the brightest deckbuilder in the world but this deck is doing 2 things.
Graveyard shenanigans. Our knights will never die with the assistance of these wonderful cards.

Haakon is actually the most likely target for a Buried Alive or Final Parting as it essentially tutors for him so we can cast our once more into the breach.

Alongside Aryel herself having plenty of conscripted tokens will help are cause when activating her ability and removing a threat.

Urborg, Tomb of Yawgmoth + Crusading Knight Turn all your opponent's lands into swamps and swing in with a massive beater. Seems like fun!

Cathar's Crusade I mean c'mon, what's a knight without a crusade to go on. Helps too that it enjoys token decks!

Give it a shot see if you can take Aryel to victory in the Kitchen Table Crusade!

In Our Next Chapter...

We'll be exploring a little biology as we talk about the return of a much beloved tribe and what it has to do with the largest organism in existence!