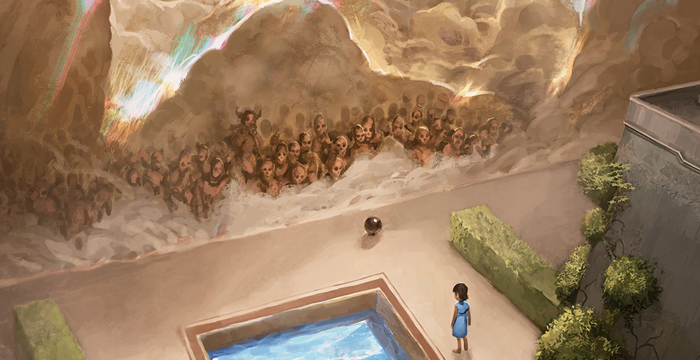 (Protection of the Hekma | Art by Ryan Lee )

Hello and welcome to another installment of Lore Seeker, an article series devoted to the legendary creatures to whom Wizards of the Coast forgot to give a story. I’ll guide you through each fragment that makes up a legendary creature and finally give them a little extra background love. This time around we’ll be highlighting Temmet, Vizier of Naktamun.

Temmet was the unofficial tour guide in Naktamun for the Gatewatch. Temmet was the first to encounter the Gatewatch when they escaped the wastes on the plane of Amonkhet. Temmet grew suspicious of the Gatewatch, noting their clothing and mannerisms as foreign to his city and way of life. He answered their questions and eventually treated them to an audience with Oketra the True, the god of stability, order, and protection on Amonkhet. Temmet eventually confirmed that the members of the Gatewatch were not native to Amonkhet. Having discovered them in the embalming chambers, he attempted to have them restrained but ended up getting Mind Controlled by Jace.

He was a minor character, especially in the shadow of Nicol Bolas's schemes. The plane of Amonkhet was based on ancient Egyptian history, Temmet on King Tutankhamen. King Tut was one of the shortest-lived Pharaoh's in ancient Egypt, so it's fitting that Temmet made very little impact on the story at large... but what impact did he have before his 15 seconds of fame?

Given this definition, it seems ol' King Tut went through a bit of a demotion in his translation to MtG, although when gods walk among their subjects, it should be expected. In Naktamun the viziers worked directly for the gods. Temmet is primarily the vizier of Oketra, but served other gods and their respective viziers. His position was one that was highly respected and revered.

White: White would be happiest in a utopian society where everyone shares and cooperates with one another.

Blue: For blue, the purpose of life is to discover what you want and how to achieve it.

Temmet seemed well on his way to achieving the ultimate goal of a utopian society. He was in charge of the embalming process on Amonkhet, meaning he worked with the dead and performed many rituals. Amonkhet's natural magic brings the dead back to life as wild malevolent creatures. The cartouche system in the city harnessed the natural power of the plane and channeled it through a talisman. Attendant mummies put these cartouches on the dead in the embalming process, binding specific orders and tasks to the undead servants. If the denizens of a city are all indentured servants and programmed to cooperate, it makes a utopia easy! Temmet embodies form over function, utilitarianism to the utmost degree. King Tut was a very young and shortlived pharaoh in Egypt. In fact, he was mostly forgotten by the people of the time. He lived to around the age of 19, another correlation to Temmet, who is depicted to be around 16 years old. The story/legend of Tutankhamen rose in popularity only after his tomb was discovered: his chamber was mostly untouched by grave robbers, so the great number of artifacts and relics found gave the modern world a closer look at the ancient culture.

For this reason, when assembling Temmet's flavor-filled deck, I am including a large sub-theme of artifacts and Treasure. It will be a good representation of the massive trove discovered in King Tut's burial chamber while supplying our deck with plenty of meat to fill out its bones. (Well, perhaps 'bones' is the wrong word... its wrappings?) This will be an artifact-heavy deck, including a few combos to finish off the game and grind out value. I also wanted to include a package of Trap cards as a nod to the classic trope of the booby-trapped tomb.

Naktamun is governed much like a church, Temmet performing many duties similar to a priest. Another card that portrays someone performing the embalming ritual is Anointer Priest, which gives us a strategic direction for the deck. White likes gaining life and making a lot of small creatures, and if we're using lots of creatures in an artifact-heavy deck, we can take advantage of the abilities of one Teshar, Ancestor's Apostle. Timed correctly, Teshar can create some crazy infinite loops: by sacrificing Myr Retriever, Junk Diver, and/or Workshop Assistant to a Krark-Clan Ironworks, we can reclaim and cast these creatures an infinite number of times. Etherium Sculptor and other cost-reducers can help guarantee the combo goes off smoothly. To join the Anointer Priest, we'll add the "Soul Sisters" like Soul Warden and Soul's Attendant to our deck, generating infinite life as a result of this loop. That, however, is just a buffer for us to search for our real win condition: Altar of the Brood, which will mill our enemies to death as our creatures flit in and out of play! This card may not look like it has flavor text, but the mechanic of Embalm says a lot on its own. From this reminder text, we know that Temmet dies and is revived with Amonkhet's magic. The Embalm ability makes him a really interesting commander too. When Temmet dies, we can choose to put him into the graveyard instead of the command zone, circumventing a bit of commander tax. When Embalm is activated, the card is then exiled, giving us an opportunity to put him back into the command zone. From there, he'll only cost two more mana to recast, even though it'll be the third time we have had his likeness on the field! First cast costs two mana, then Embalm for five, cast again for four, and Embalm for five once more... this cycle of casting keeps him on the board for a longer period of time at a cheaper cost to us. On top of that, if Temmet becomes a token, his beginning-of-combat trigger can target himself. (The Embalmed token does not deal commander damage, however.)

This deck is a strange combination of aggro and combo. In the early game, we'll create small tokens and use Temmet to get them through. In the mid game, we'll transition to more of a control deck. In the final stages of the game, we'll hopefully go off with Teshar. It's a weird spot to fill, so the best advice I can give is to spread the love. Attack everyone for little bits of damage; focus down Planeswalkers with your unblockable tokens, and gain some favor with the rest of the table until you have a chance to get to your combo. You will be playing pretty active rather than the usual reactivity of a deck in these colors.

I hope you enjoyed this micro history lesson of an article. I certainly know more about ancient Egypt than I did before writing it. This deck will flood the battlefield with artifacts and generate a ton of value. Once the engine is established, the deck will be hard to stop, and the Traps will create some fantastic "Gotcha!" moments that will generate stories that you and your friends will remember for years.

That’s it for this week! As always, let me know which legendary characters you’d like to see get the story spotlight in the future!