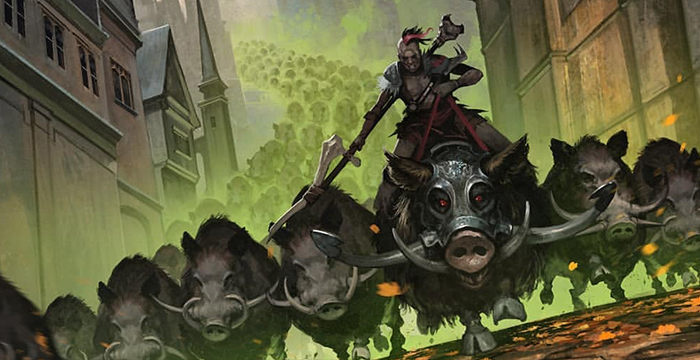 (Rhythm of the Wild | Art by Tomasz Jedruszek )

Hello and welcome to another installment of Lore Seeker, an article series devoted to the legendary creatures to whom Wizards of the Coast forgot to give a story. I’ll guide you through each fragment that makes up a legendary creature and give them a little extra background love. This time around we’ll be highlighting Ghired, Conclave Exile.

Ghired is from the plane of Ravnica and was initially aligned with the Selesnya Conclave. After witnessing the manifestation of the Ilharg, the Raze-Boar leading up to Bolas' attempt to complete The Elderspell ritual, he shifted allegiance to the Gruul Clans. Ghired maintains a deep love and connection to animals and the magic of the Selesnya. He calls upon Boars, Rhinos, and other large beasts to aid his destruction.

The recently-released Guildmasters' Guide to Ravnica is an amazing resource for learning about Ravnican city life. It's the first place where guildless members of society are specifically mentioned. When looking at cards from Ravnica, it's easy to overlook the fact that not every member of society is affiliated with a guild. In fact, approximately 50% of the denizens of Ravnica maintain a life apart from guilds. The module guide also describes what it takes to transfer from one guild to another, an uncommon but not unheard of practice. If you're interested in learning more about Ravnica as a setting, I highly recommend checking it out. For those of you who also happen to play Dungeons and Dragons, there's also the upside of running a campaign in Ravnica with this book. Ghired went through a transformation while witnessing the glory of Ilharg, undergoing a Shamanic Revelation. This Profound Journey left him questioning both his own beliefs and the belief structure of the Selesnya Conclave, culminating in his exile. Let's look closely at each aspect of his card to give him a deck that befits this transformation.

Exile: to expel and bar someone from their native country

The story blurb does not indicate that the speaker of the Selesnya Conclave had anything to do with Ghired leaving. His name, however, tells a different story: Ghired left of his own volition, uprooting his life and heading to the Rubblebelt, a discontinuous archipelago of reclaimed city, long since abandoned, left to be taken over by the flora and fauna of Ravnica. This is where the Gruul Clans call home. Each member of the Selesnya is closely connected with a Voda, a Dryad that leads the community and unites each member with the Worldsoul, a manifestation of nature itself whose current form is that of Trostani, Selesnya's Voice. Abandoning the guild in order to serve a new god wounded the Worldsoul personally. Severing of the connection through any means other than those that are proper invites the punishment of banishment.

You might say that Ghired went on an Otherworldly Journey, a card which not only represents his story but which also synergizes beautifully with his enter-the-battlefield ability. We'll be sure to include extra effects like this in our final build! Ilharg, the Raze-Boar, Ghired's inspiration, also makes an appearance, and also synergizes nicely with these types of cards; if Ilharg puts a large creature into play and we flicker it with Otherworldly Journey, that creature won't be returned to our hand at the end of the turn. As such, we'll look for a large suite of creatures that have a big impact on the board, preferably creating tokens or generating ramp.

Along these lines, Cloudstone Curio is a centerpiece to generate massive amounts of value. Whenever we play a creature that comes in with a token, we're able to bounce the nontoken creature back to our hand, recast it, and so on. I discovered an accidental infinite loop using the Curio, Burning-Tree Emissary, and Flameshadow Conjuring. These three cards generate infinite red and green mana, as well as infinite Emissary tokens with haste. If you are somehow unable to attack, adding Impact Tremors to the loop can take care of that.

Red: Freedom of expression is of utmost importance.

Green: Nature before all else. Darwinism at its finest.

White: All for one, one for all. Utilitarianism's most extreme version.

Selesnya (GW): The Selesnya Conclave believes in a harmonious union of nature and civilization. Conclave members dream of embracing all of Ravnica in their "peaceful" union. Their growing army resists the ambition and destructive impulses of other guilds.

Gruul (RG): The Gruul Clans are the most out of place on Ravnica. They desire a fresh start and are eager to topple the established city in order to reclaim the land in the name of Natural Order.

The two guilds share the color of green in their identity, so I assume Ghired's main affiliation is with green mana. A strong connection to nature is essential to him, which is realized through his ability to call upon the power of large green creatures. The deck is balanced heavily toward green to showcase his identity. I love the way both guilds' garb comes together in this piece. Ghired understands the merit of quality armor, carrying a piece of the Selesnya with him at all times. The added horns and scavenged material really push the feel of Ghired's initiation to the Gruul clan, highlighted most by his bright red pants.

Less prominently displayed is the stampede of Rhinos behind him. I've seen a good amount of gameplay with this deck and can attest that there will indeed be a stampede of Rhinos trampling over your opponents. The Rhino token Ghired creates upon entering the battlefield is a fantastic target for Populate, and with constant access to him, you'll be guaranteed to see loads them. It's a good thing WotC supplied preconstructed deck buyers with plenty of tokens to represent his stampede. (This is sarcasm; for those unaware, the deck only came with a single Rhino token)

In a recent Blogatog post from Mark Rosewater, it was specified that each color now has a designated spellcasting creature type primarily linked to it.

I find it strange that Ghired would be considered a Shaman then, given that it is primarily considered the red spellcaster type. As we explored with his mana cost, the guilds he has been aligned with are Selesnya and Gruul. The only color shared by the two is green, so given this new categorization I would have guessed Ghired would be a Druid. Just like with mechanics, though, I understand that it is not a hard and fast rule. Some iconic green-aligned Shaman creatures are Sakura-Tribe Elder, Eternal Witness, and Oracle of Mul Daya. We'll make sure to give Ghired some other Shamans in his deck, such as Dragonmaster Outcast, which is both flavorful and powerful if we're able to duplicate those Dragon tokens! As we explored earlier, the primary strategy of the deck is to utilize enter-the-battlefield abilities. However, there are some very effective cards that allow us to attack with ease, enabling Ghired's Populate trigger Reconnaissance can save any of our creatures from unprofitable attacks and, because of unintuitive timing in combat, lets us untap each creature that attacked after it has dealt damage, effectively giving our team vigilance. The other two enablers are less tricky: both Dolmen Gate and Iroas, God of Victory prevent damage dealt to our attacking creatures. Iroas has additional benefit of giving our team menace. That's not his primary purpose here, but it doesn't hurt.

My final recommendation for the combat-focused portion of the deck is Breath of Fury: with this Aura attached to a Rhino token and Ghired on the board (and at least one opponent we can attack profitably), we can keep giving ourself extra combat steps.

The guild kits released with the recent Ravnica sets gave us some very cool and highly thematic basic lands to use with this build. Ghired is now aligned with Gruul, so both red and green lands are going to be the Gruul basics, while the white influence of Selesnya can be represented by the plains.

Cloudstone Curio is the second most expensive card in the deck behind Enlightened Tutor, which we're going to use to find the Curio. Cloudstone Curio is one of the most important cards in the deck, so that's an easy keep. A tutor can be replaced with consistent card draw, but what I like about this one is the ability to find either half of the combo as well as other important artifacts and enchantments, such as those that enable us to attack with impunity.

Ghired is a powerful commander that can be abused in a couple of ways. I believe pushing his ETB ability will yield stronger results, as attacking with your commander always comes with risks. Being so recent, it is hard to gauge what his EDHREC page will look like in final builds, but I'm excited to see it.

What do you think about Ghired? What are your impressions on Commander 2019 in general? I'd love to hear your thoughts. Thank you for reading! As always, let me know which legendary characters you’d like to see get the story spotlight in the future!