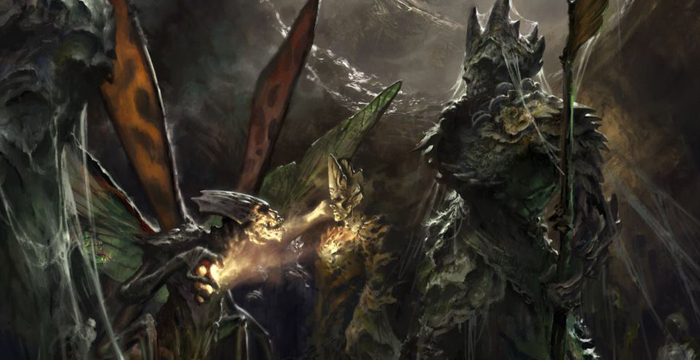 Hello, and welcome to another installment of Lore Seeker, an article series devoted to the legendary creatures to whom Wizards of the Coast forgot to give a story. I’ll guide you through each aspect that makes up a legendary creature and finally give them a little extra background attention. This time around I’ll be highlighting Mazirek, Kraul Death Priest.

Mazirek, now dead, was a Golgari death priest from the plane of Ravnica. He was a powerful necromancer and the leader of the Kraul, an insectoid race that dwells in the undercity. Mazirek's power swells simply from proximity to death. He temporarily allied with Vraska to overthrow the previous Golgari guild leader, Jarad, the undead Elf lich, so Vraska could take control. Soon after this change in leadership, Mazirek allied himself with Nicol Bolas, which eventually lead to his demise at the hands of one of his own creations.

His most notable claim to fame is raising the Erstwhile in the lead-up to War of the Spark. The Erstwhile are a dead faction of Devkarin Elves, laid to rest in a deep mausoleum long ago. The most powerful of these undead Elves is Storrev, Devkarin Lich, who became the de facto leader of the Erstwhile. Though the Erstwhile could not disobey a direct order from Mazirek, Storrev (with assistance from Vraska and motivated by his anger at being enslaved) tricked Mazirek into the trap that killed him.

Awaken the Erstwhile is the primary build-around for the deck; it's a symmetrical effect, so we're going to look for ways to break the symmetry by keeping fewer cards in our opponents' hands. When possible, we're looking for discard outlets that are repeatable and that rely on sacrificing creatures to interact favorably with Mazirek's ability.

The title of Priest carries a connotation of religious affiliation; they're figures that possesses the authority to perform rites and administer sacraments. The rites of the Golgari Swarm are likely sacrificial in nature. Though not from Ravnica, Whisper, Blood Liturgist illustrates the exact flavor we're looking for here; a liturgist, a practitioner of religious worship, whose particular brand of worship involves sacrifice. Her flavor text puts it best: "Look how they beg for the knife!" These are the kind of devout followers Mazirek needs for his church of death.

Black: Amorality and pragmatism; no waste, no qualms, and no feelings.

Green: Survival of the fittest, pure and simple. What lives will die.

Golgari (green/black): The colors of the graveyard, rot, and necromancy. The Golgari appreciate the natural cycle more than anyone else; what dies can and will be brought back and re-purposed it will live once more. Decay and rot are the Golgari way. Mazirek has transformed his section of the undercity into a fungus-ridden hive, perfect for necromantic experimentation. Kraul are an alien race to begin with, but it seems that Mazirek has intensified the dissimilarity by adopting some plantlike qualities. Perhaps this comes from self-experimentation? Perhaps this is not his first body, and the betrayal of Storrev was not the first time he has died. Whether the ground around him regrew his body or he grew a clone from the loam, something is very off. Nevertheless, this is a strong indicator of his power, and another direction for the deck to travel down. Golgari is very graveyard-focused, and it would be an incredible handicap to avoid abusing it. With the amount we want to sacrifice creatures, we'll need just as many ways to get them back as we can find.

The Kraul are the insect humanoids we have only seen on Ravnica. They identify largely with the Golgari, but exclusively so affiliated; some instead choose to remain unaligned. The rest of the guilds of Ravnica generally avoid the Kraul, and the Kraul rarely attempt to venture to the surface. It is this not-so-subtle mutual avoidance that pushes them into the arms of the Golgari Swarm.

True to his story blurb, Mazirek makes himself and his followers more powerful by simply witnessing death. It is very possible to knock people out with Commander damage, but it'll be a grind. We're going to be more reliant on Grave Pact-like effects to control the board and slowly accrue value, letting the counters propagate and accumulate naturally. There are easy cuts that could be made to some of the flavor inclusions, like Mausoleum Secrets, for classic Mazirek cards like Hardened Scales or Winding Constrictor; these I would recommend trying to squeeze into your builds.

Mazirek did a lot for the Kraul, regardless of how corrupt or evil he was. He was their leader because they wanted him to be, not because he asked for it. We know on a meta level that Mazirek was evil; he sided with Bolas in the end and raised and enslaved the Erstwhile. Was he evil when he was placed in the position of death priest, or did his power overtake and corrupt him? I don't think we'll ever get an answer, but I'd like to believe the latter. Whenever I build a deck around a character from Ravnica, I have a hard time finding better basic lands to use than the Guild Kit basics, and this deck is no exception. They're specially-made to represent the guild, and they even have a watermark of the guild symbol.

This build has a lot in common with a Nath of the Gilt-Leaf deck: discard for profit and work towards an advantageous opportunity to Awaken the Erstwhile. I took a lot of inspiration from the EDHREC pages for Nath, Meren, and Mazirek. I find that searching through similar decks, even if their only similarity is that they share the same colors, doing so helps to more quickly find the high-impact cards. I ignored the Elf tribal cards on Nath's page and instead focused on the discard synergies, Meren's page provided aristocrats synergies, and Mazirek's page featured primarily counter synergies (which I mostly ignored) but also had sacrifice synergies. The biggest discovery came from Wave of Vitriol and its interaction with Mazirek. This is a fantastic way to get through a pillowfort player's defenses while simultaneously adding an immense amount of power to the board, whether we lose a lot or not. I included a few more nonbasic lands in the list because we want to sacrifice them and replace them with the wave. Really, it acts like an Overrun in this deck.

Overall I think Nath would make a more effective commander for this deck, but the flavor is what it's all about! If you enjoy the list, I would check Mazirek out. This was yet another reader suggestion, and I'm always on the lookout for more, so let me know which legendary characters you’d like to see get the story spotlight in the future!

Thank you for reading!