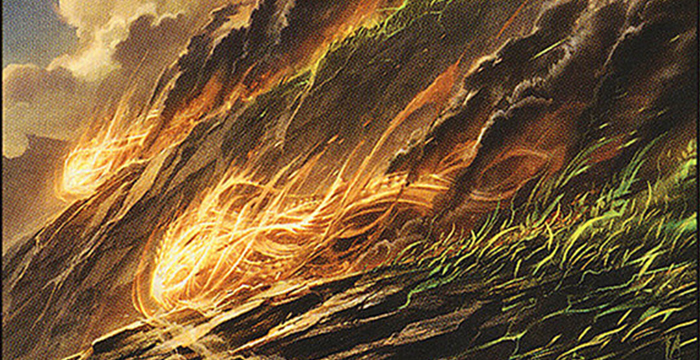 Hello, and welcome to another installment of Lore Seeker, an article series devoted to the legendary creatures to whom Wizards of the Coast forgot to give a story. I’ll guide you through each fragment that makes up a legendary creature and finally give them a little extra background love. This time around we’ll be highlighting Roon of the Hidden Realm.

Roon of the Hidden Realm is a Rhox Soldier from an undisclosed plane who is believed to guard the gate to an ethereal world. He was brought up by a devout family, but was drawn towards warlike pursuits, against their wishes. Roon joined the Herald's Army, where he gained prowess in combat. Some time later, after years of battle, his company mistakenly slaughtered a number of innocents. As a result, he deserted the battalion and took to wandering in the wilderness, where he received a vision of the Hidden Realm, during which he was told he was the keeper of its secrets.

Roon then embarked on a pilgrimage to rally people to his cause. His compelling personality attracted many, and he became a prophet with legions of followers. Roon doesn't actively seek out conflict, but when he perceives a threat, he will eliminate it quickly and efficiently. For those who believe in him, he is a great guardian who will one day open the gate to eternal glory.

This is the non-realm of the Eldrazi titans: Ulamog, Kozilek, and Emrakul. Since time immemorial they've ravaged and wasted entire planes to satiate their unlimited hunger. Trapped for a time, their release from their stone prison spelled horrific disaster for the denizens of Zendikar.

The Eldrazi exist half as an idea and half as beings of great power, and their occupancy of the Blind Eternities all but seals their inclusion in our flavor-fueled Hidden Realm deck.

While we're definitely going to include the legal titans, the dynamic of this ethereal form provides the greater foundation of the deck. What other cards exist partially in spirit and partially in body? Morph and Manifest creatures. We'll delve into this more later. Green: Tapping into the awesome power of nature, green relies on instinct and natural symbiosis while embracing the duality of nature as both orderly and chaotic.

Blue: Slow, methodical, and highly intelligent. Seeking opportunity, blue is a collection of resources and it advocates tinkering and creating the things needed for survival.

Bant (green, white and blue): Colors of the honorable warrior. Soldiers in the shard of Bant worship order and think of the group before the individual. Individuals aligned with Bant on the plane of Alara are primarily aligned with white.

The philosophy of the honorable warrior fits most directly with white's ideals, so what do green and blue provide? Green supplies an appreciation for nature and the way in which disputes are handled in the wild. Blue provides a tactical mind and a plotting intelligence that guides the Soldiers of Bant toward success. Blue and green are an enemy color pairing, often struggling to blend their ideals together. With white in the mix, there is a definitive set of rules and laws to follow which makes Bant an incredibly dangerous adversary.

Roon came from a devout family that did not want war to be his life, and ultimately they had their way. He is still considered a warlord, but the tragedy in his past pushed him away from violence towards leadership. He has been tempered by the experience and follows a more strict ethos than he did as a frontline grunt. This heavily armored rhino-man is prepared for battle, as if he is calling for a charge, yet none of his followers are anywhere to be seen. The only thing around him is this dark ominous fog; is he conjuring some beast from the Hidden Realm? Perhaps he himself coalesced from the fog. The ethereal nature of his power is intriguing and lends itself to the Obscuring Aether of Morph and Manifest creatures quite nicely.

The subtle nod to his color identity can be found in the gems inlaid in his pole-arm. This is my favorite piece of his artwork, something I did not notice until I had the enlarged image right in front of me. Roon is from a Commander set, the format we all love that pays more attention to color identity than any other format. It is one of the defining characteristics and fundamental restrictions that helps our format stand apart, and I wanted to give some extra credit to Mr. Steve Prescott for finding such a unique way to convey that aspect of the game in this legend's artwork.

Though the story blurb states that the plane Roon calls home is unknown, Alara is the only plane we know of that contains Rhox, so it's logical to conclude that that's where he's from. Furthermore, the Rhox on Alara were only found in the Bant shard of the plane, before the Conflux, when everything got all jumbled up. As Roon is aligned to the colors of Bant, the signs that he is from Alara are too obvious to ignore.

In this deck, we're going to try to take advantage of the face-down mechanics to cheat out large creatures. The primary enabler is Scroll of Fate. When exiled with Roon's ability, the Manifest or Morph creature will re-enter the battlefield face-up. This can be a great way to cheat mana costs of expensive creatures.

There are now a number of cards that have a repeatable Manifest ability in Roon's colors: Whisperwood Elemental provides board protection as well as Manifest creatures, Temur War Shaman interacts very well with Roon's ability, Mastery of the Unseen provides a mana sink and a touch of lifegain, and Primordial Mist enables utilization of stranded Manifest cards. The connecting thread of these cards is that they access the top card of the library. To choose the card that is Manifested, we can include a selection of top-deck manipulation cards, the highlights being Pondering Mage, Scroll Rack, and Jace, the Mind Sculptor.

We've already explored space manipulation, so it's time to explore time. What sort of time mage would Roon be if he didn't win with an infinite turn loop?

The three pieces we need are Roon, Time Warp, and Eternal Witness. It's a simple loop that needs a number of pieces to work, but it'll eventually win the game. That's boring, though! Let's bring some spice to the idea of time manipulation. Suspend is a mechanic that modifies the timing of spells, sending them to exile and ticking down towards their casting. It will not make a large appearance in the deck, but when given a choice between Cultivate and Search for Tomorrow we're going with the Suspend card.

Finally, I can't talk about time without touching on one of Magic's premiere time mages: Teferi. Though he himself will make no appearance in planeswalker form, I thought it fitting to include Teferi's Protection, as Phasing is yet another way to depict the ethereal nature of Roon's power.

For this deck I've selected the full art basic lands from the original Zendikar set. The massive amount of raw mana on the plane of Zendikar drew the Eldrazi titans to it, and it has drawn me to it as well. The lands are vibrant and the art depicts unusual and alien formations, a perfect fit for this deck.

There's no way to sugar-coat this one - the deck is expensive. The initial idea revolves around the Eldrazi titans, which cost around $30 each, and with those as our starting place I threw any idea of having a budget-friendly deck out the window. There are two cards over $100 (Jace, the Mind Sculptor and Illusionary Mask). Scroll Rack takes our third most expensive card slot, coming in around $60 and Phyrexian Dreadnought falls just after it at $50. Filling it out with some fetch lands and tutors, the deck costs roughly $850 to assemble yourself, and that's being generous.

Why include Illusionary Mask or Phyrexian Dreadnought in the first place? I'm glad you asked. Illusionary Mask is a strange card with a lot of words, but basically it allows us the flexibility to play non-Morph creatures face-down. With the Mask, we're allowed to pay more for the card we play face-down, but we must pay at least the entire cost of the card, including colored mana. A lot of the time, this will actually provide a reduced cost to a Morph and still allows us to flip it over normally, or let the trigger of the Mask flip it.

The second trick involves the aforementioned Phyrexian Dreadnought. If we play the Dreadnought face-down with the Mask, we can flip it up on another turn to avoid the negative enters-the-battlefield ability. This works with the Scroll of Fate, as well, by putting the Dreadnought face-down and flipping it up after it has entered. This particular synergy does not play nicely with Roon's ability to flip face-down creatures, though, so be careful.

Is this combo worth $200? Probably not, but we're doing it anyway!

My closing thought to you, dear reader, is to please not assemble this deck. I make these things so you don't have to! But, if any of you do, please show me, because I would love to see it in action.