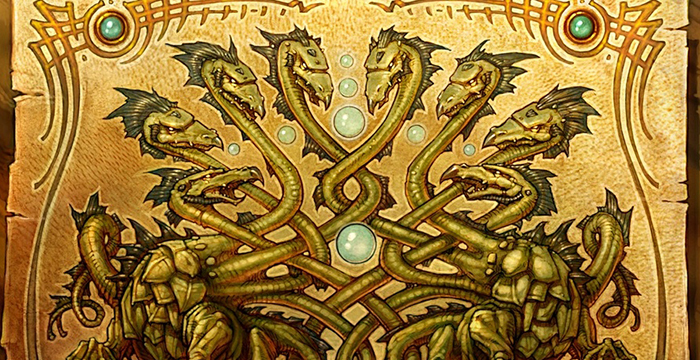 Hello, and welcome to another installment of Lore Seeker, an article series devoted to the legendary creatures to whom Wizards of the Coast forgot to give a story. I’ll guide you through each aspect that makes up a legendary creature and finally give them a little extra background attention. This time around I’ll be highlighting Polukranos, Unchained.

Polukranos, known as the World Eater, fell to Theros from its celestial lair during the battle between Purphoros and Heliod, where he was quickly sealed under the Nessian Forest. Elspeth was tasked by Heliod to defeat the Hydra, who had recently escaped its stasis and was ravaging the land. Polukranos was defeated and, in death, was locked away in the Underworld. As we see in his recent depiction, however, Polukranos is back, freed from his chains and angrier than ever.

Polukranos loosely translates from Greek to "many heads." More accurately, it means "many helmets," but I think we know what Wizards was going for. An apt name for a Hydra, and a good direction to go for the deck, but more on that later.

Chains seem to be a large trope in Theros Beyond Death. Looking through the creatures, specifically those with Escape, the majority have some element of chains hanging from them. The imagery of chains, especially in conjunction with their attachment to manacles, gives the underworld a much stronger prison feel than it previously had in my mind.

Black: Amorality and pragmatism; no waste, no qualms, and no feelings.

Green: Survival of the fittest, pure and simple. What lives will die.

Golgari (green/black): The colors of the graveyard, rot, and necromancy. As we explored in my last article, the Golgari are interested in recycling. Specifically, the Golgari necromancers make use of the dead, bringing back others to do their bidding for them. In the case of Polukranos, he is his own necromantic master.

I initially wanted to avoid doing creatures of the same color identity back-to-back in this series, but I made an exception because this black-green deck is going to use the graveyard in a very different way than the previous installment. In order to fuel our commander, this is a self-mill deck, so we're going to see a lot of cards like Stitcher's Supplier that actively put cards in the graveyard, not to revive them like Meren, but to exile them and keep Polukranos around. As we can see, the head that was destroyed in the battle with Elspeth has regenerated in the underworld into two new heads, zombified, discolored, and horrible. It's interesting to me that Polukranos still has faces. When we explored Theros last with Tymaret, the Murder King, we discovered that the Zombies in the underworld lose their faces, adopting clay masks created in the underworld to hide their disfigurement and then replaced with the gold ones forged when they escape and become Returned. We also see Elspeth exempt from this mutation; likely her spark protected her (we also see her with a gold mask presumably still in the underworld, but I'll leave that rant for another day.)

Does this mean Polukranos has the power of a planeswalker, or are the rules just different for beasts of his nature? We will likely never know, but it does seem like a missed opportunity to put some rad gold Hydra masks on him.

The Hydra originated from Greek mythology in the tale of Heracles (most commonly known as Hercules, the Roman adaptation). Heracles was tasked with a set of labors to redeem himself for prior actions. The Hydra was destroyed with the help of an ally and, more importantly, a golden sword that the goddess Athena bestowed upon him.

As a Greek-themed set, we can see a lot of the tropes of this story adapted in to Magic. Elspeth acts as Heracles, having been given a weapon from a God (Godsend) and tasked with defeating the Hydra. The biggest difference between MTG Hydras and those in Greek myths is their amphibious nature; the Lernaean Hydra of myth lived in a lake. We see a lot of large beasts in the water, like Leviathans, so I'm guessing they didn't want to add another big creature to blue's roster. Removing all six heads from the beast kills it, sending it to the underworld once more. We are going to imagine each head as a +1/+1 counter for the remainder our discussion here. Since the Hydra will create a new head for each removed, the fact that Polukranos comes back with twelve heads (counters) is extremely flavorful. This rationale falls apart when we get to his ability when being dealt damage removes counters, but does not regenerate heads on its own.

Let's introduce Polukranos to his new best friend: Vigor. The way replacement effects work is beneficial to us in this case, so instead of losing the counters, Polukranos will gain that many heads. Problem solved!

I want Polukranos to recreate that scene in the Disney version of Hercules. I want so many heads on this beast that they take up the entire sky. Now, there are a few other options to add additional counters to creatures, but because these are really only interacting with the commander and not any other cards in the deck, two will be plenty.

Theros Beyond Death introduced a new style of basic land: the Nyx basics (or the Pokelands.) I am not a fan of these, whether for this deck or any other. The only place I think I would consider them is in a deck helmed by one of the Therosian Gods or in an enchantress deck. For this particular deck, I was having a hard time nailing down exactly what type of basic fits, but I decided to take this as an opportunity to talk about some of my favorite basics. These two were both done by my favorite Magic artist, John Avon. I love the saturation and depth of these two pieces, and the old border looks more like dirt, perfect to fill our graveyard with. This deck is running a shockingly low number of lands, but we have a work around that I learned from the Commanders Brew podcast. The idea in question is to lower the land count and instead run a bunch of those single-mana spells that tutor for a land, such as Lay of the Land and Traverse the Ulvenwald. The reason we want these here is to fill our graveyard with the instants/sorceries that only exist to find the land we need. Because Polukranos doesn't care what type of card is in the graveyard and simply wants a larger number of cards in there, we can use these to both fix our mana and fill the graveyard. It's a neat trick that I have wanted to incorporate in a meaningful way for some time.

If you're a fan of big creatures and a deck full of two-for-ones, this is the build for you. I'm very intrigued by Polukranos Unchained. That which at first looks like just a big creature leads to some interesting deckbuilding decisions. A big thanks to Tom, EDHREC's resident Greek expert, for giving me some insight into the name of Polukranos and some other general tidbits for this article.