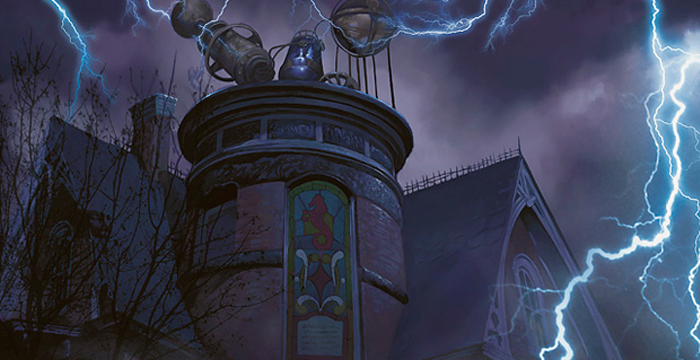 Hello, and welcome to another installment of Lore Seeker, an article series devoted to the legendary creatures to whom Wizards of the Coast forgot to give a story. I'll guide you through each aspect that makes up a legendary creature and finally give them a little extra background attention. This time around we’ll be highlighting Ludevic, Necro-Alchemist.

When talking about Ludevic, it's nearly impossible to avoid his ultimate creation, Kraum, Ludevic's Opus, and because they both have Partner, the deck we build will have both of them as its commanders.

Ludevic of Ulm is a reclusive necro-alchemist that lives in Havengul on the plane of Innistrad. In his necro-alchemical pursuits, he aims for more than simply the creation of Skaabs. Instead, Ludevic aims to understand the horror his creations inspire. Some think that Ludevic's consumption of potions and inhalation of toxic vapors has left him no choice but to abandon his experiments, leaving him to devote his sizable intellect to the problem of making himself and his business partners filthy rich. He has taken Geralf Cecani under his wing, training him in the arts of necro-alchemy.

A necro-alchemist is a wizard that harnesses the energy of Geists to fuel crazed technological inventions. Effectively, they achieve necromancy through alchemical means. Also known as "skaberen," these wizards hone the craft of creating frankensteinian monstrosities known as Skaabs. Skaabs are blue-aligned Zombies that frequently interact with the graveyard, either through putting cards there from the top of the library, or requiring creatures (corpses) to be exiled from your graveyard. Using up dead bodies to craft a Skaab evokes images of a crazed scientist in a lab coat standing over a piecemeal behemoth abomination, periodically illuminated by blindingly bright arcs of electricity, and we can see through various cards in the game that Ludevic's protégé, Geralf, is following in his mentor's footsteps.

Blue: Intelligence is king; a Wizard must accumulate as much knowledge as possible. Blue is controlled and calculated.

Red: Impulsive and rash, red is the wild inventor. Exploring an idea only as long as it holds their attention.

Izzet (blue/red): Leaping from one ill-conceived experiment to another, an Izzet mage is able to spend much time studying, but will abandon fruitless pursuits for more promising experiments. Blue and red embody the mad scientist moving from one obsessive project to the next.

Ludevic is Magic: the Gathering's Dr. Frankenstein. Unlike that unfortunate would-be giver of life, however, Ludevic is enthralled by his creation and loves the horror Kraum brings to the denizens of Havengul. Instead of running away from the meat golem, Ludevic studies it.

A simple way to build the deck would be as a Zombie tribal deck. The colors of Ludevic don't line up with the primary color of the Zombie tribe (black), and though Ludevic does create monstrosities, he is truly obsessed with the horror he can inflict. The primary path to victory for this deck is a bit of a cobbled together monstrosity itself. Mill, resource denial, and punisher themes all come together here to form a rather annoying deck that, oddly enough, functions a bit like a Group Hug deck. The card that best showcases this idea is Fevered Visions.

It functions similarly to Howling Mine, but asks for a bit in return. This is exactly how we want Ludevic to function. Sulfuric Vortex and Copper Tablet pair with Ludevic to fuel our own Fevered Visions.

Ludevic is a somewhat political commander. Using his ability to point aggression elsewhere is a good way to keep your life total higher than your opponents'. However, I want to trigger this for other people; I want people to have so many cards in their hands that they feel inclined to decline the draw. As mentioned before, using cards like Sulfuric Vortex and Copper Tablet will automatically trigger Ludevic on each of your opponents' turns.

With Ludevic filling the hand, we have access to a few extra options to deal continual damage to our opponents that rely upon the number of cards in hand.

When selecting corpses for experimentation, those with large, healthy brains make the most excellent servants. If he is feeling particularly generous, Ludevic will take those less naturally gifted and give them some lessons. In Magic, a thought in one's mind is represented by a card in hand. With Ludevic's ability, we're hoping to load up everyone's hand with as many cards as possible; let's get those brains nice and fat, ready for the harvest.

The next step in our gameplan is to limit our opponents' ability to take advantage of their bounty. Arcane Laboratory and Damping Sphere limit the amount of spells cast each turn. Mana Maze, Winter Orb, and Static Orb all inhibit mana production. Forced Fruition fits in this category as well because our opponent will never be able to empty their hands, which is the main goal of this group of cards. The basic lands I've selected for Ludevic and Kraum are, appropriately, from the plane of Innistrad. The isolated tower on the water is the perfect quiet place to experiment while the small valley hamlet provides Kraum plenty of individuals to terrorize.

The deck has a very slim average converted mana cost, coming in just under three, and it boasts a healthy dose of card draw. These two factors make it run smoothly and consistently. It's fairly defenseless, aside from a few board wipes, so play them sparingly. People will absolutely get annoyed by a lot of the things this deck does, and aggression towards you is to be expected. Ultimately, the deck operates like a less-tuned Nekusar, the Mindrazer deck, but with loads of flavor.

No card costs over $20, and the deck as a whole sits around $250 if you were to assemble it yourself. The most surprising cost is Copper Tablet, which was once on the Reserved List pre-2002.

I hope I've fueled your mind for your next experiment. The data on EDHREC relating to Partner commanders is a little hazy, but Ludevic and Kraum command only 114 decks together. This is likely due to the fact that the main reason to run Partner commanders is to add additional colors. Whatever the reason, the two actually work decently well together; if Ludevic is giving out extra cards, your opponents will have more spells to cast, triggering Kraum. This build capitalizes on the extra card draw in order to find the cards that finally hinder the ability to cast extra spells in a turn rather than to draw cards throughout the entire game.