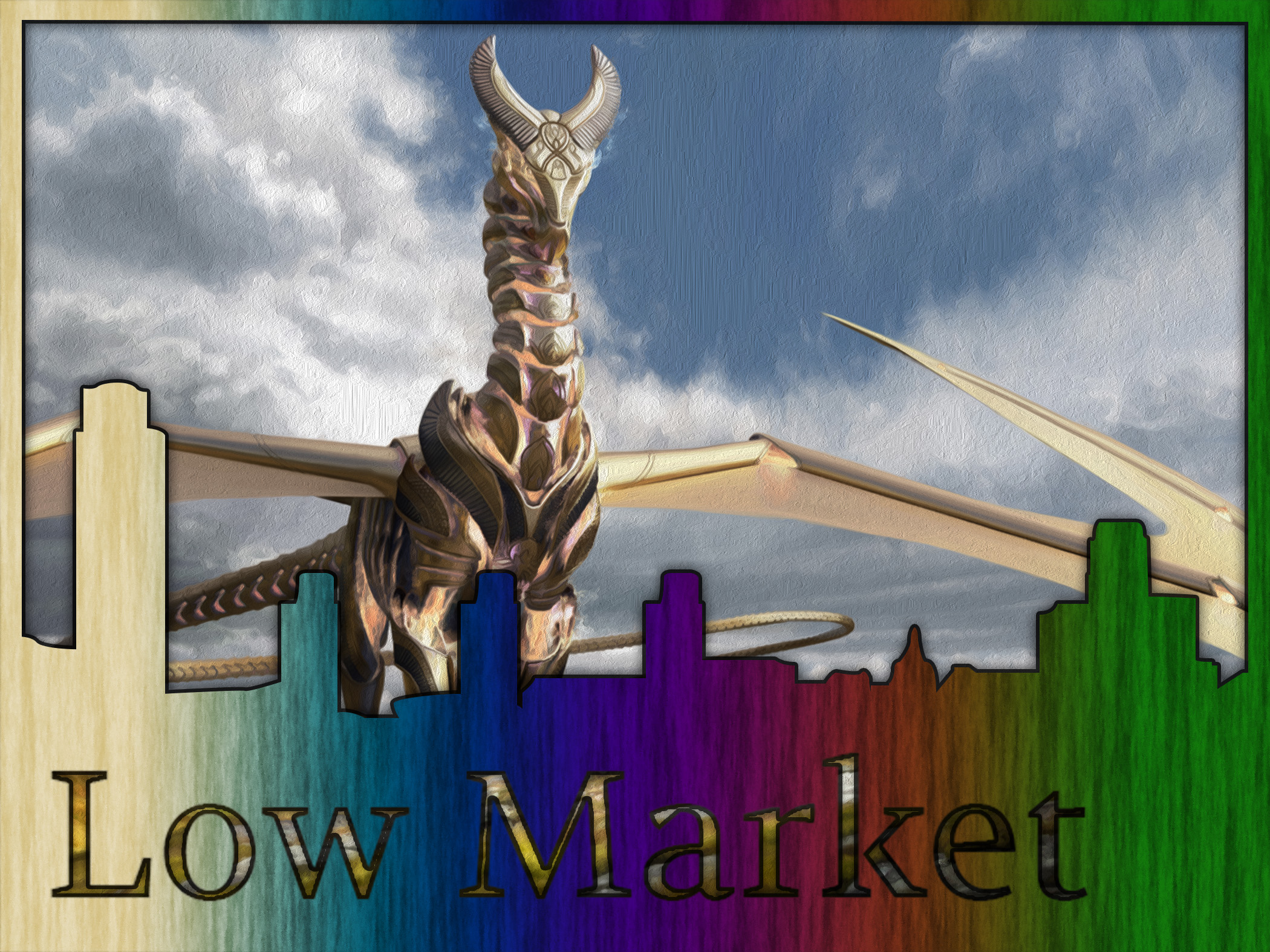 Welcome back to Low Market, a column for budget Commander deckbuilding! Every week, I gaze balefully at the perpetually empty "Planeswalker" subcategory of my deck template, yearning for the day that I will stuff it to the brim with planeswalkers. That day has finally come: we're taking a new angle on our usual budget and building a five-color Superfriends deck, headed by Ramos, Dragon Engine! Good [Super]friends are Hard to Find

When creating decks for Low Market, my (simplified) process is typically: research useful cards for the theme du jour, retain mid-level (~$4.00-$7.00) cards that are critical to the deck, substitute cheaper replacements for more expensive cards, and outright cut overly-expensive cards, even if I can't find a cheaper, less-efficient version. This Superfriends deck is completely scrambling that strategy: the median price of a planeswalker is about $6.00, which is 10% of the cost of most Low Market decks. I can't look for the ideal cards and pare down the price later. Instead, I looked at the list of all planeswalkers, organized from least to most expensive, and picked out which ones fulfill the usual needs of a commander deck: ramp, removal, mana ramp, card draw, and most importantly, win conditions.

Under most circumstances, we can't consider powerful planeswalker ultimates (those high-loyalty cost abilities) to be win conditions, because of how difficult they are to achieve. But in a Superfriends deck, rife with proliferate effects like Inexorable Tide, Contagion Clasp, and Thrummingbird, firing off a powerful ult becomes much more realistic. Ulting Dovin Baan, Sorin, Grim Nemesis, or Vraska the Unseen is likely a death sentence for at least one opponent.

For additional gas, we have a few combos that feature planeswalkers. Not all that long ago, we saw Felidar Guardian emergency-banned from Standard on account of its interaction with Saheeli Rai: use her second loyalty ability, and you can create a hasty token copy of the Guardian, which can flicker Saheeli, bringing her back to the battlefield with her default 3 loyalty counters, and enabling her to -2 afresh. Before too long, you have infinite hasty angry kitties to slay your opponents. Two-card combos may not be the most fun win condition, but when we're constrained to planeswalker-focused win conditions in a budget Superfriends deck, I'll take whatever I can get.

Our second infinite combo requires slightly more pieces to go off. In Magic Story, The Chain Veil is a forbidden magical artifact that amplifies Liliana's magic. What if we could, say, untap The Chain Veil and reuse that unknowable arcane power for our own purposes? Well, both Ral Zarek and Tezzeret the Seeker can do that. But where can we get four-plus mana repeatably? One answer is "some odd mana rocks". Remember all those proliferate effects I mentioned? They make mediocre mana rock Astral Cornucopia and decent mana rock Everflowing Chalice significantly more powerful. If either of those rocks has four counters on it, Tezzeret can untap it and The Chain Veil with his +1, netting us infinite activations of any other planeswalker we have out. Five or more counters, and we have infinite mana as well. The last variant of this combo requires Xenagos, the Reveler, The Chain Veil, four or more creatures, and either Ral Zarek or Tezzeret the Seeker to untap The Chain Veil.

In the final decklist at the end of this article, we've managed to squeeze in 23 planeswalkers without completely shattering all conceptions of the word "budget". Many of them perform a multitude of purposes-card draw plus ramp, removal plus protection, et cetera—and I encourage you to read them through, rather than have me blandly type out their abilities here. However, I would like to draw your attention to a particular subcategory of planeswalkers: those who interact with artifacts. During my research I noticed that artifact-centric planeswalkers are, for the most part, extraordinarily cheap. Tezzeret, Master of Metal, Tezzeret the Schemer, and the aforementioned Saheeli Rai are all recently-printed cards with little application in Standard and only specific applications in Commander. Then there's Daretti, Scrap Savant, a rare example of a planeswalker with multiple printings. Finally, I knew I wanted to include $10.00ish card Tezzeret the Seeker for his use in our infinite combos.

Faced with the decision of either cutting many of these planeswalkers or finding a way to accomodate them, I included cards for a small artifact subtheme. Hidden Stockpile provides artifact creature blockers for our planeswalkers, with a side of scrying. Curse of Opulence encourages players to attack each other instead of our Superfriends, fixes our mana, and ramps us. Throne of Geth is a highly-efficient proliferate effect but only functions with an artifact theme. Finally, Thopter Spy Network brings both tokens and card advantage to the table.

You may notice that, of those four cards I just named, only one of them is an artifact. This is partially by design: Tezzeret, Master of Metal has a +1 that retrieves the next artifact from the top of our deck. With only a handful of artifacts in our deck, we're almost guaranteed to end up with something useful. Astral Cornucopia and Everflowing Chalice are both prominent combo pieces. Silent Arbiter is a stellar method of protecting the planeswalkers. And then there's The Chain Veil, one of the planeswalkeriest artfacts to ever walk the planes.

...who needs planeswalker support cards? Answer: us. We've already noted some expensive planeswalker-centric cards, but most support cards with "planeswalker" in the rules text are actually quite cheap. Every time a planeswalker joins the Gatewatch, we get their Oath, a legendary enchantment with an enter-the-battlefield effect plus a static ability that cares about having planeswalkers. There are six Oaths to date, and we're including all but one (sorry, Oath of Chandra.) My favorite among these is probably Oath of Gideon, for that slight edge in activating more powerful loyalty abilities. Oath of Ajani and Oath of Nissa are MVPs for providing ramp and color-fixing to a deck in desperate need of both of those things. Another upside of the Oaths: they synergize with Brago, King Eternal, who is already useful for his ability to reset planeswalkers to their starting loyalty counters and to squeeze an extra activation out of them each turn. Given that our planeswalkers are adept at dealing with a wide variety of scenarios, it's a good thing we have two planeswalker-specific tutors to call on: Djeru, With Eyes Open and Call the Gatewatch. Then there's Deploy the Gatewatch, which isn't quite a tutor, but does provide on-theme card advantage. According to Frank Karsten at Channel Fireball, 23 planeswakers is exactly the number required to have a greater than 50% chance of finding two of them in Commander.

The Sideways Strat — [Super]friends to the End This being a grindy, five-color deck, I couldn't resist including one of my favorite alternate win conditions, Maze's End. If we coax out all ten Gates, we win the game. To facilitate this possibility, I made sure that we have cards to play additional lands per turn: Kynaios and Tiro of Meletis, Journey of Discovery, Kiora, the Crashing Wave, and my pet card Walking Atlas. I further appreciate Kynaios and Tiro as a card that could calm the knee-jerk negative reactions that people often have to planeswalkers, while also being a great high-toughness creature for blocking.

With a Little Help from my [Super]friends

By building our deck upon a foundation of inexpensive planeswalkers, we achieved our goal: the entire list costs approximately $150.00, according to TCG Mid prices. I can only hope you all enjoyed this alternate approach to budget deckbuilding as much as I did. As always, find me on Twitter, or shoot me an email if you have any questions about this week's deck. The list can be found on TappedOut here. And, until next we meet, enjoy your time browsing the Low Market.