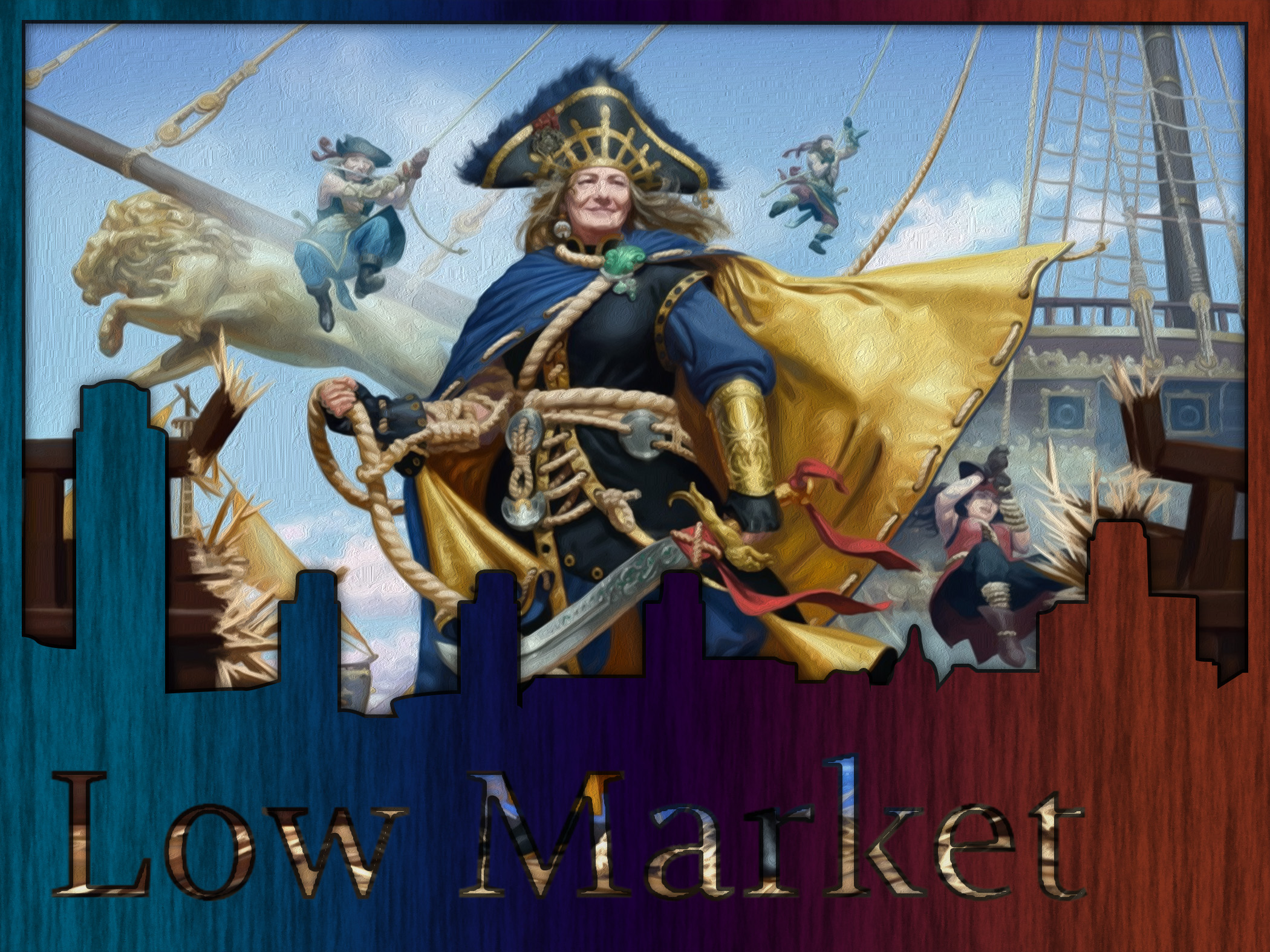 Getcher cutlass and hoist the mainsail: we’re headed to the plane of Ixalan, a world of wonder and adventure and complex tribal mechanical themes. We had many options for this week’s budget deck: a crew of pirates led by Admiral Beckett Brass, a stomping of dinosaurs–that is the technical term–charging behind Gishath, Sun’s Avatar, a school of merfolk under the command of Tishana, Voice of Thunder, or a collection of vampires headed by Vona, Butcher of the Magan. Who to choose? The answer is… rogues? Wait, what? Tribal decks—that is, decks built around creature type synergies—are quite popular, and I am a noted fan. The downside of tribal decks, especially when they are based on a hot new tribe like Pirates or Dinosaurs, is that constructing them can be a bit…rote. At time of writing, there are scarcely enough pirates to make a Commander deck, so cutting down to the best ones is fairly straightforward. This is why I’ve taken a slightly different route for this Low Market deck: our commander will be Admiral Beckett Brass, but with the help of a few notable cards, she’ll whip our band of disorganized rogues into an honest-to-goodness pirate crew!

Mechanically, our deck will be a fully-operational rogue tribal deck. In fact, I’ve paid more mind to flavor than usual, which is why every single creature in the 99 is a rogue or generates rogues (I’m looking at you, Weirding Shaman.) Our headline cards are the enchantments I alluded to a moment ago: Xenograft and its shiny new cousin Arcane Adaptation. Either of these will let us declare that are rogues are now also pirates, and pivot our plan of attack from prowling around to commandeering permanents with Admiral Beckett Brass. This translation works impressively well: Beckett Brass wants us to hit our opponents to steal their stuff, and most rogue mechanics involve small evasive creatures dealing combat damage to players. In fact, with a little bit of digging, we uncover the mechanic Prowl from Lorwyn block. If we’ve dealt damage to an opponent using a creature that shares a type with the Prowl card, we can cast it for an alternate (usually cheaper) cost, and sometimes squeeze a bonus effect out. (Extra turn from Notorious Throng? Yes please.) A Consumer Alert at the beginning of a Low Market article? Strange, I know, but there is already an interaction to warn you about, and it involves our friend Conspiracy (the card, not the card type). Conspiracy is the progenitor of cards like Xenograft and Arcane Adaptation; sure, it’s a few more mana and a couple of bucks, but why wouldn’t we use it as an additional copy of an effect central to our deck? That’s because Conspiracy does not specify “in addition to its other types”. Whereas the other two can make our Rogues into Pirate Rogues, Conspiracy would totally overwrite their typeline to be “Pirate”. Since we’re trying to build a deck that can function with in-built rogue tribal themes, and add pirate tribal when our commander hits the field, Conspiracy will not be in the deck.

Unsurprisingly, our rogue tribal deck is going to need some rogues. We have a fun variety of the scoundrels: rogues that thieve artifacts (Thada Adel, Acquisitor), rogues that sow chaos (Grenzo, Havoc Raiser), and rogues that reduce the cost of rogues (Frogtosser Banneret). We have a small goblin subtheme, since the Prowl mechanic was tied to goblins as well as rogues. To avoid detracting from our primary game plan, every goblin we have is also a rogue (except the aforementioned Weirding Shaman).

To ensure that our pirates and/or rogues can get through to our opponents, we need some evasion. Levitation is an inexpensive way to grant everyone flying, and Keeper of Keys is itself a rogue that makes our field unblockable (with a side of card advantage too). A handful of rogues come with abilities to grant evasion to single targets, such as Whirler Rogue and Marchesa’s Smuggler.

While it isn’t evasion in the strictest sense, forcing our opponents to attack opens them up to counterattack and fits the rogue/pirate flavor too well for me to ignore. Bident of Thassa was already an instant-include for its repeatable card advantage, but its activated ability makes it even more useful. One of my new favorite cards, Disrupt Decorum, might be the best pseudo-evasion we can get. Players will be forced to fight one another, and we can stride in after the melee to reap the benefits. With enough evasive rogues, Grenzo, Havoc Raiser can play the same role.

A Role to Play

We have our theme (pi-rogues!), we have our win condition (many hard-to-block creatures!), but what of everything else? What of ramp, removal, or card advantage? As I filled in these categories, I sought as many flavorful options as possible. Pirates do a great deal of exploring, and they need the right tools for the job: Explorer’s Scope, Surveyor’s Scope, and Thaumatic Compass. Sword of the Animist functions well enough that I decided to include it, even if pirates don’t use Nissa’s sword under normal circumstances.

We already discussed the extreme source of card advantage that is the Bident of Thassa, which is very similar to flavor slam-dunk Coastal Piracy. In a deck less committed to flavor, Deepfathom Skulker could be an additional draw-on-damage effect, plus an activated ability that makes a creature unblockable. If you include the Skulker, I would also suggest a one-of Wastes, so that your land ramp ensures the mana to activate it.

Outside of the (stellar) Vanquisher’s Banner, we are sadly lacking effects to beef up our rogues. I would happily include Brass Herald if it turned into the chosen type as it entered. The two “all-tribal” lords who do gain types, Metallic Mimic and Adaptive Automaton, are both floating around $6.00, the latter for its utility in non-standard tribal decks like this one, and the former (probably) for its application in a standard with heavy tribal themes.

Seize the Day (and the Ship) It doesn’t take much… erm, booty? to build this deck: we can hire a full crew for a mere $55.00 according to TCG Mid prices. Thank you for joining us on this journey through choppy seas and strange tribal decks. For the TappedOut-inclined, here is this week’s list. Do you (or yer mateys) have an idea for a Low Market article? Find me on Twitter, or shoot me an email. Dock here next time for a budget take on a traditionally high-budget deck: five-color Superfriends! Until next we meet, enjoy your time browsing the Low Market.