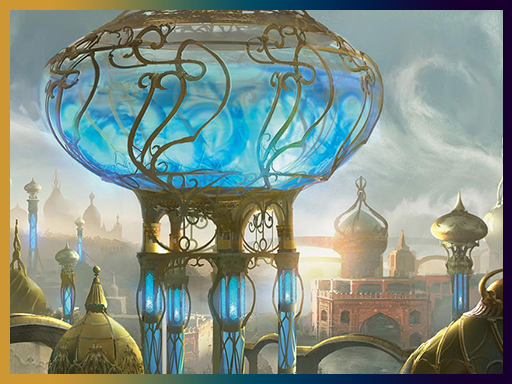 The term "combo" is applied to a wide variety of scenarios and frequently divided into two categories: infinite and non-infinite. Today's deck list utilizes both, with our talented commander Sydri, Galvanic Genius!

I Believe That Is a Combination

With this Sydri deck, we're assembling a tiny puzzle, and if we collect the right pieces of this puzzle, we can win outright. That's why we're going to step through each combo built into this deck, beginning with the main event: Aetherflux Reservoir.

With nothing but the Reservoir, our commander, and a handful of spells, we can threaten to kill the table. Sydri turns the Reservoir into a creature, grants it lifelink, brains someone for 50 damage, gains us back 50 life, and repeats this process until the game is over. To play into the Reservoir gameplan, we're packing this deck with gobs of one-mana artifacts like Chromatic Sphere, and cost-reduction effects like Etherium Sculptor. Even if we don't search for or draw the Reservoir, many of those small artifacts can be cashed in for card draw, and the cost reducers play into other artifact strategies. If we end up with many spells to cast but not Aetherflux Reservoir, we can potentially end the game with Temporal Fissure or Mind's Desire, which also want us to cast many spells at once.

Another peculiar Sydri interaction lives in Voltaic Construct. It can untap an artifact creature for a mere 2 mana. If that artifact creature happens to be an animated Dreamstone Hedron or Everflowing Chalice, we've just generated infinite colorless mana, which turns into infinite mana of any color when paired with an animated Darksteel Ingot or similar mana rock. From there, we can dig into one of our game-ending combos, or maybe dump the mana into Debt to the Deathless. As convenient as it would be, combos don't just assemble themselves. Therefore, many combo decks are built with cards that can search up a required combo piece. Whir of Invention is one of our most flexible search cards, perhaps getting a combo piece at the end of an opponent's turn. Diabolic Tutor may not be an exciting tutor, but it's cheap and gets the job done.

I also included some of my favorite specific tutors in the list. Remember all those one-mana artifacts I alluded to earlier? Trinket Mage and Artificer's Intuition can fetch any of them. Artificer's Intuition is a deceptively threatening card: repeatable tutoring, even for a very specific subset of cards, is powerful, and I've seen more than one player lose games for underestimating it.

In Case of Emergency, Break Combo

While our primary gameplan is combo, it doesn't hurt to have some backup plans in place. Sydri can turn an artifact-creature beater into a massive life swing: I'm looking at Colossus of Akros, Myr Battlesphere, or Sphinx of the Steel Wind. The Colossus is especially good for getting damage through if we give it deathtouch, because the combination of deathtouch and trample allows it to kill each blocker with 1 damage and plow through with all the rest.

Caltrops is one of those unique Sydri interactions that might keep us alive long enough to combo. It is mana-intensive, but if a threatening player might attack us, we can animate Caltrops and give it deathtouch before that player attacks. Staff of Nin can be used more proactively as spot removal for the low cost of UWB-tap. My love of Esper artifacts goes way back to my second-ever Commander deck, and takes a cue from the one-time scourge of Modern, Eggs. Eggs wins games through a roundabout infinite combo in which Pyrite Spellbomb is reused to (eventually) kill your opponent, but it took a long while to work out the proper sequencing. If you want to bring that combo home to your EDH playgroup, but *don't* want to cause any conniptions, you can set up loops with Codex Shredder, an artifact sacrifice outlet such as Krark-Clan Ironworks, and a large recursion spell like Faith's Reward or Open the Vaults.

Combo decks don't have to cost you an arm and a leg: our Sydri Aetherflux list checks out for $50.00 by TCG Player's Mid pricing. Want to talk turkey about assembling combo decks of your own? Eager to crack a few eggs? Interested in suggesting a commander or theme? Come by my Tumblr, toss 140 characters to me on Twitter, or drop me an email. And until next we meet, enjoy your time browsing the Low Market.