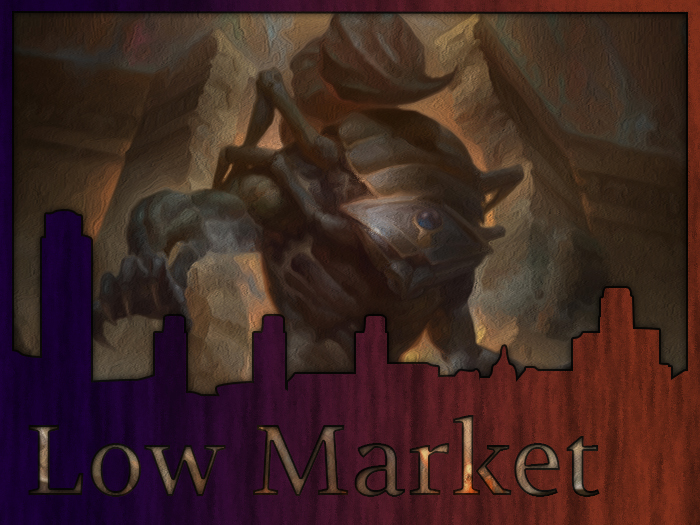 The People Have Spoken!

Welcome to Low Market, brought to you this week by extra democracy! No, I’m not talking about the recently-passed Independence Day here in the US: I’m talking about you, dear readers, for voting to narrow down this week’s theme. You voted strongly in favor of building one of the three new Gods from Hour of Devastation (The Scarab God, The Locust God, and The Scorpion God). Upon consideration, the hipster in me—some would argue the hipster that is me—chose the least-represented of the three: The Scorpion God!

As an author, I strive each week for as much variety as possible in my articles. For The Scorpion God, this proved to be slightly problematic, since this deck wants nearly all the same black -1/-1 counter interactions that our Hapatra deck did. This called for an additional, more-outlandish theme to supplement our -1/-1 counters. The result: black-red elemental tribal!

When the bright-and-sunny Flamekin of Lorwyn transformed into the doom-and-gloom Cinders of Shadowmoor, they picked up a handy mechanic: wither, which makes them deal damage to creatures in the form of -1/-1 counters. Consequently, enough elementals deal in -1/-1 counters that we can firmly theme our deck around them. Kulrath Knight, when combined with our commander, lets us snipe creatures away from combat. Hateflayer, and its odd little untap symbol, become removal that draws us cards. As I tend to do whenever I have a creature with the untap symbol, let’s include a land that taps one of our creatures, in this case the new Survivors’ Encampment. Finally, one of the best -1/-1 counter payoffs of all: Necroskitter thieves creatures that die with -1/-1 counters on them.

Of course, elementals on their own won’t provide enough sources of -1/-1 counter, so let’s branch out a bit more. The equipment Blight Sickle, and more notably the enchantment Everlasting Torment, ensures we have further methods of providing wither to the creatures that lack it. For in-theme spot removal, there’s Puncture Blast, Skinrender, and—perhaps my favorite card in this deck—Incremental Blight. In my mind, Incremental Blight is normally too finicky to act as removal for most decks, but with The Scorpion God, the possibility of drawing two or three cards is far too appealing to pass up.

The proliferate mechanic, which lets us increment anything with counters up by one, is a shoo-in for this deck, especially since our commander’s activated ability is too expensive to justify activating constantly. Grim Affliction, Volt Charge, and Spread the Sickness respectively act as passable, decent, and solid spot removal. Contagion Clasp is an opportunity for repeatable Proliferate (and it’s even kind enough to bring its own -1/-1 counter.) In an ideal world, we would also have its bigger sister, Contagion Engine, but the appeal of Atraxa, Praetors’ Voice has regrettably pushed it outside a comfortable price range for this budget deck.

Regular readers will likely recall Archfiend of Ifnir from my Hapatra article, as well as my deep-seated love for the cycling mechanic. Said Archfiend was too appealing to pass up for this deck, which is why we have as many cycling lands as I could reasonably include (eight, for the curious).

I’m not satisfied with only the elementals that play with -1/-1 counters: for a proper elemental tribal deck, it would be nice to have a handful more tribal interactions. Flamekin Harbinger, like its kin (ba-dum-tish) from the Harbinger cycle, is a powerful toolbox card in a deck with as many elemental options as this one. Smokebraider and Brighthearth Banneret accelerate us into the more mana-intensive elementals, like the aforementioned Hateflayer.

The Lorwyn elementals have a subtheme of activated abilities matters, most apparent on cards like Soulbright Flamekin and Ceaseless Searblades. I only plan to include a few of such cards in this list, but if you find that theme appealing, look at including Ashling the Pilgrim, Inner-Flame Igniter, or Manaforge Cinder as well. The strangest part of assembling this The Scorpion God list was the collection of cards that I ended up cutting for price reasons. Somewhere between relative scarcity, high demand, and actually-being-decent, a few highly-thematic cards were too expensive to justify. I’ve already mentioned Contagion Engine; I also cut Dusk Urchins (potential -1/-1 counter card advantage), Crumbling Ashes (high-quality repeatable removal), and Stigma Lasher (another Wither elemental with an awesome damage trigger). If your personal budget has a bit of space left in it, or if you’re looking for reasonably-priced upgrades, these few cards might be a good place to start.

Where Is Your God Now?

With our price-conscious excludes, our The Scorpion God deck—isn’t that an awkward piece of grammatically-correct English?–clocks in at $65.00 according to TCG Player’s Mid prices. Next time on Low Market, we’re highlighting an adorable theme: Aura Curses! But, I’m a little conflicted, and this is where you come in: should I build with Queen Marchesa, with Zur the Enchanter, or with both to illustrate their differences? Let me know in the comments below! As always, feel free to poke me on Twitter or through email. Until next we meet, enjoy your time browsing the Low Market.