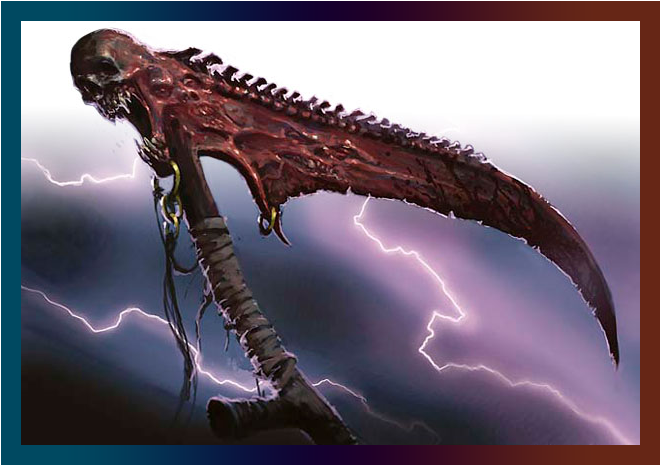 For many intenet denizens, April Fools' Day is an opportunity for pranks ranging from the hilarious to the inane. Here at Low Market Headquarters, it's an opportunity for some...unconventional deck building. Maybe with, gee, I don't know... a multicolored legendary artifact – equipment?

Yes, Unscythe! Now, as a non-creature card, Unscythe is technically "illegal" to use as a commander, so our first deck building hurdle is: how do we get away with this anyway? Don't forget that playing Magic and playing Commander involves a social contract between you and the other players. If you find yourself wanting to build a Tamanoa control deck, or a Glint-Eye Nephilim spellslinger deck, or (as it were) an Unscythe, Killer of Kings deck, have a conversation with the other players in your community! Perhaps they are amenable to an amount of off-the-wall, casual play. (My local metagame has a number of decks with "houseruled" commanders: Ink-Treader Nephilim spellslinger, Yore-Tiller Nephilim reanimator, Genju of the Realm living lands, and more.)

Once we've navigated the waters of social interaction, we hopefully have the greenlight to build, and boy, is this an odd challenge. Our commander wants wielders who can deal damage to creatures, which could happen through combat or through...less conventional means. Let's examine some of the options. Notably, Unscythe does not specify that we must kill creatures via combat damage, so any damage will do. Pestilence Demon and Jaya Ballard, Task Mage are both creatures with optional boardwipes stapled to them. Regrettably, the power/toughness increase from Unscythe won't help Jaya make it through her Inferno, though it will help Pestilence Demon survive. Arcbond is an oddball spell to surprise convert any creature to the source of a damage boardwipe, most likely when it gets caught in combat, but sometimes in combination with damage boardwipes like our Blasphemous Act.

When we want a more "fair" (in the heaviest of air-quotes) method of slaying the opposition, we can fool creatures into attacking and/or blocking our wielder. Nemesis Mask and Breaker of Armies are my personal favorites, and probably the most effective for throwing every possible blocker under the bus. On defense, Fumiko the Lowblood or Chemister's Trick can potentially bring the creature to us (or to our opponents instead, which is not a bad outcome by any stretch).

Only some of these combat-influencing cards are creatures who can hold Unscythe for us; therefore, let's make sure we have plenty of other wielders! Harvester of Souls is a potential card advantage engine if blocked, or a sizable chunk of damage if not. Similarly, Ogre Slumlord helps us eke more token-y goodness out of death triggers. Creatures like Necroskitter and Dread Slaver make this a very different game, one where we take control of opposing creatures rather than exile them and convert them into zombies. Note that this is certainly a one-or-the-other situation, which leads us to an interesting tangent...

Rules of the Wretched There exists at least one other scythe-themed piece of equipment in Magic: Scythe of the Wretched, which I came across while researching this article. After some close reading, I had high hopes that a creature holding Unscythe and Scythe of the Wretched could generate a zombie and also reanimate the creature under our control, but through consultation with the EDHREC team and the Magic Judges chat, we determined that this is not the case: it's either exile or reanimate, because a card changing zones makes it so that the game can no longer "find it" to steal.

This trip down the rules rabbit hole served as a reminder to me that I will now pass on to you: we're making an utterly ridiculous EDH deck with some bizarre interactions, so remember to have fun with it, even if not everything goes your way. If you want a Kederekt Creeper waving Unscythe in one hand (claw? protrusion?) and Scythe of the Wretched in the other hand (growth? appendage?), then by all means, stick them in the deck!

With all the fun we are (or at least should) be having, let's not forget that we need a solid amount of fixing and card draw to glue this jank together. Our commander is unusable if we can't draw some creatures, and its mana cost is no laughing matter. This deck list contains a quantity of mana rocks I typically reserve for an artifact-themed deck. That many artifacts make Vedalken Engineer feel like a safe addition, especially since it's a tremendous help towards casting Unscythe.

With one or two exceptions like the aforementioned Harvester of Souls, most of the card draw enclosed is of the goodstuff breed, like Brainstorm for the early, or scaleable-favorite Blue Sun's Zenith for the late. "Wheel effects" that discard our hand and draw us more cards, e.g. Reforge the Soul, can also help us efficiently refuel our hand. Normally, I reserve the Sideways Strat section for a weirder take on the week's deck, but seeing as our theme this week is already a bit out there, I thought I'd use this space for a dose of reality. Not every playgroup tolerates an "illegal" commander, so if you find yourself in this situation but still have a mighty need to build Unscythe, there are ways around that pesky limitation! Make a deck headed by Marchesa or Thraximundar or maybe even budget Sedris, the Traitor King brought to you by Low Market, and include the elements we discussed plus artifact tutors (Fabricate, Whir of Invention, et cetera). Plenty of my own Commander decks follow this formula: if you can't fit your theme in the command zone, suffuse the deck with it.

It's been a rip-roaring time roaring and ripping opponents' creatures apart, and this bundle of fun checks out for $50.00. My terrifying scythe and I hope you enjoyed this installment of Low Market. How would an Unscythe deck go over in your Commander playgroup? Would you allow it? What about your friends? Let me know! I have but one metagame to play in, so I'm always curious to learn from others' experiences. Stop in on Twitter, throw me an ask on Tumblr, or email me here. Until next we meet, enjoy your time browsing the Low Market.