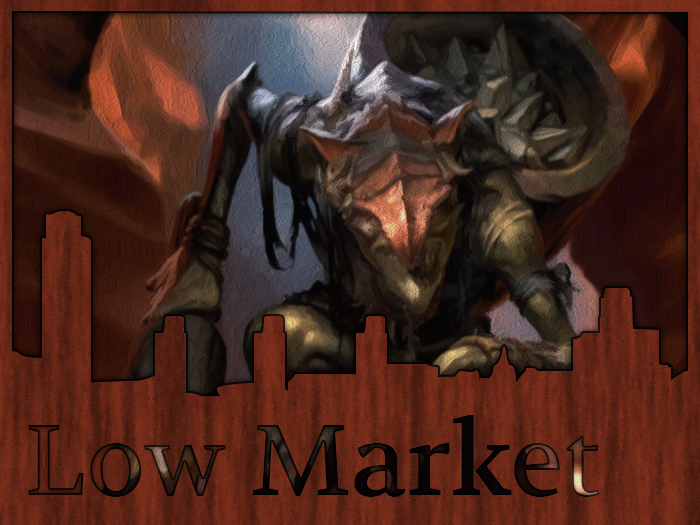 Here on Low Market, we do our level best to balance out what sorts of budget decks we build, in terms of both colors used and highlighted archetypes. Unfortunately, there are occasional deficiencies. Today we push the pendulum back towards equity by shining the spotlight on an underused color (mono-red) in a classic archetype (spellslinger). Presenting: Zada, Hedron Grinder! Come Over for a Spell

The spellslinger archetype focuses on dueling in the manner you would expect from a classic fantasy mage: with arcane bolts of energy and powerful incantations. In less-bombastic terms, it's a deck that casts many instants and sorceries, and infrequently relies upon creatures. Historically, these decks often end up in blue/red, allowing access to the full breadth of card advantage, direct damage, and recursion. Mono-red spellslinger is a more challenging proposition, since red is rarely allowed to draw cards in a way that doesn't involve discarding an equal number of cards. That's where Zada comes in: suddenly, every "cantrip" (small spell with a "draw a card" effect) can draw us a card for each creature we control, so long as that spell can target Zada.

We are fortunate, then, that red has a long and growing history of cantrips. Even recent sets gave us Expedite to grant haste and Renegade Tactics, which rarely targets an opposing creature in our deck. For those situations where we don't have Zada, or don't have many creatures, let's include a few pieces of independent card advantage like Commune with Lava and Act on Impulse. If we want to maximize our card advantage and our damage, we need creatures, and our best method of doing so will be instants and sorceries that create tokens (especially if they target a single creature). Heat Shimmer and Twinflame both temporarily double every creature we control: decent with a board of tokens, excellent with creatures like Emrakul's Hatcher or Chancellor of the Forge. Make Mischief and Spawning Breath are odd ducks that risk killing our smallest creatures in exchange for unique tokens like Eldrazi Scion and Devils. Either of these cards (or a boardwipe) combos hilariously with Otherworldly Outburst, especially since 3/2 Eldrazi Horrors are among the largest tokens you can make in mono-red.

As a deck that likes both creature tokens and instants and sorceries, Young Pyromancer is a no-brainer. Slightly less efficient, but no less playable for our deck, is Goblinslide and its rejected Frozen concept art. If we prefer to generate tokens after casting spells, Empty the Warrens will do the job nicely.

With many of our previous decklists, we've had number of a clear-cut, this-is-a-win-condition cards, or else some quantity of cards that unite to create a game-ending combo. Zada's win conditions are a little more distributed, since all we need is the right mix of tokens and combat tricks to destroy our opponents. We have numerous cards to buff our creatures. Some of them are highly scalable (Balduvian Rage, Blazing Shoal). Some of them grant double strike for cheap (Temur Battle Rage, Assault Strobe). It boils down to a straightforward numbers game: our board will explosively grow, whether in quantity or power, and sometimes at instant speed. With luck, we're forcing a lot of unfavorable combat math on our opponents. Welcome to another Low Market mini-segment! Every now and again, I need to highlight the strange interactions of a single card, and today I turn my gaze to Chaos Warp. This card is one of the staple-iest mono-red staples around, and for good reason: instant-speed removal for any permanent? Yes, please. In my opinion, almost every mono-red deck ought to play Chaos Warp. In our deck, it's still great removal, but with an extra layer of icing: it converts all of our creatures into whatever permanents we flip into from our library. Admittedly, our abundance of instants and sorceries makes this less hilarious than it could be, but it does mean that we can respond to a boardwipe by turning our creatures into (likely) some quantity of lands. Don't forget that with the command zone replacement rule, when Zada would go to your library, you may instead put her in the command zone (while still resolving Chaos Warp as normal).

Two mini-segments in one article? It must be someone's birthday! (Not mine, though. Statistically speaking, it is definitely someone's birthday.) This Sideway Strat is a lesson from Ink-Treader Nephilim, the original card with Zada's spell-copying effect. If you use the splice onto arcane mechanic to splice Glacial Ray, for example, onto Kodama's Reach, you create a spell that has the former's targeted removal and the latter's ramp effect. In other words, it's a single target spell that Ink-Treader (or Zada, for that matter) could copy across multiple creatures, thereby ramping you an incredible amount. Zada, naturally, doesn't have access to green for Kodama's Reach, but we can do a passable mono-red impression with Desperate Ritual. I've included a small suite of splice onto arcane cards (e.g. Overblaze) to allow for this spontaneous mana-generation combo.

Axe to the Grind

Our lovely, oddball spellslinger deck checks out for $50.00 according to TCG Mid pricing. Want to chat about EDH archetypes like spellslinger? Have some ideas for tuning Zada? You can always reach me via Twitter, Tumblr, or email. Join us next time when we push into more colors than Low Market has pushed into before. Until then, enjoy your time browsing the Low Market.