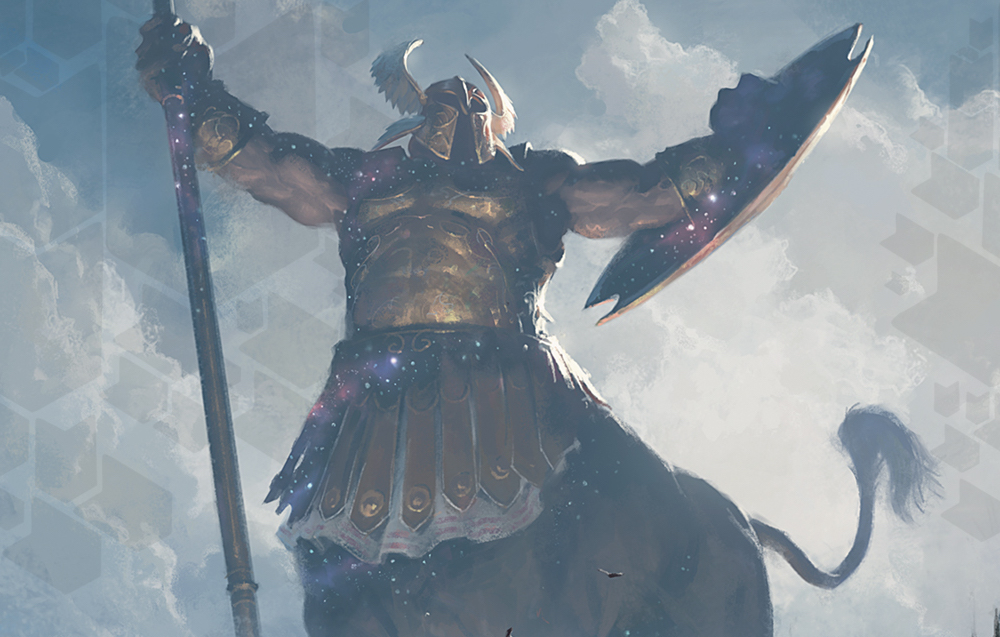 Hello and welcome to the very first edition of Mechanically Minded, the column where we build decks around some of the coolest keyword mechanics in Magic's history. For the inaugural edition of this column, let's explore Banding!

You'll remember this mechanic most recently from Theros, though that was not its first appearance. It originated in 2009's Eventide, though it was named 'Chroma' and was way less interesting. Wizards R&D updated and rebranded the keyword for Theros, and to excellent effect.

Devotion is pretty simple. Cards ask you to check your Devotion to one or two colors. Count the number of corresponding mana symbols among permanents you control, then slot that number in for the Devotion check. For example, take Abhorrent Overlord:

When it enters the battlefield, count up the number of black symbols in the mana costs of all permanents you control. Then create that many Harpy tokens (hope you brought your token binder).

The Overlord is cool and all, but it's just the beginning. If we're going to build around a mechanic, we need the mechanic on our commander. Which brings us to our next section...

Send in the Gods

There are 15—count 'em, 15—Gods in Theros block, and that means 15 options to build around the Devotion mechanic. Here's the complete list:

Aside from poor Pharika, these all see a fair amount of play. The question is, which one pays us off best for Devotion?

Pick a God, Any God

Some Gods want devoted followers more than others. Purphoros, God of the Forge, for instance, actually disincentivizes you from building around Devotion, since it's harder to kill when it's only an enchantment.

Other Gods are a bit underpowered as creatures. Kruphix, God of Horizons offers potent abilities, but fulfilling its Devotion criteria doesn't pay off particularly well. Sure, an indestructible 4/7 is nice, but that deck will likely win off huge spells, not a 4/7 body. To build around Devotion, we need something better.

Ultimately, we want to be aggressive. If we're jumping through hoops to animate our indestructible God, attacking seems like the best way to reward our hard work. With that thought in mind, here's the final cut:

Mogis has 7 power, the magic number for a commander (just three attacks for lethal damage). Also, his static ability can sometimes thin your opponents' blockers enough to create favorable attacks. Still, two damage is tolerable in EDH and players often have sacrifice fodder. Therefore, Mogis is out.

Xenagos is an interesting option. It might possess the most powerful of all the static abilities, and since it already supports aggressive strategies, the 6/5 body will become relevant. However, six power means it takes an entire extra turn to deal lethal damage, which is a little disappointing.

That leaves us with Iroas, God of Victory. You might want to close your eyes, Boros haters.

Victory! We Have Victory!

Iroas gives our entire team menace, including theGod itself. Also, it's got that 7 power we love so much. Plus, even if our opponents find double blocks, our creatures can't die in combat. All this adds up to an extremely potent threat.

To build around Iroas, we must first start with creatures. More specifically, we want creatures with multiple color pips in their casting costs so that we can push our devotion count to the upper limits. The recent hit set Dominaria gave us a couple sweet options:

If we think of each permanent in our deck as a value for Devotion, these are both three out of five (Iroas counts itself, so we only need five pips to hit Devotion). Furthermore, these cards are both very powerful creatures irrespective of their casting costs. Let's look at a few more:

These are all easily found under Iroas's commander page on EDHREC.

When building around a mechanic, it's wise to anticipate inherent weaknesses. For example, if we need permanents to make Devotion function, there's an obvious counter to our strategy. It looks like this: Well, probably not exactly like this, since many people seem to hate Invocations. Whatever, you get what I mean. Board wipes will hurt this deck more than usual. So here are a few counter measures:

Though clunky, these are about the best we can do to recoup card advantage once we have our board wiped. With Selfless Spirit, we might dodge a board wipe completely. The Devotion count on these isn't particularly high, but that's just something we'll have to accept.

That's good, but we're still a little soft to creature removal. Remember, Devotion counts the pips on all our permanents, not just the creatures. So let's get a little creative.

Let's begin with enchantments, the permanent type voted "Least Likely to be Removed" by its high school class.

Though these are somewhat low on the Devotion scale, they're nearly impossible to remove for red, black, and blue decks. What's more, Oblivion Ring and Chained to the Rocks offer excellent and efficient spot removal options while still supporting our Devotion theme.

Forget The Most Interesting Man in the World. Experimental Frenzy might be The Most Interesting Card in the Deck. It's best in a low curve deck where we can cast 2 or 3 spells a turn off the top, and that's exactly what we have here. It's also an excellent way to rebuild after a board wipe. And as an added bonus, it boosts our Devotion.

For more, I'd recommend EDHREC's Themes section. Though there's no specific section for Devotion, the enchantments section is still on-theme: As you can see, most of these cards happen to fall within our colors.

These Planes Are Made for Walkin'

Planeswalkers are a bit less reliable for Devotion, yet a few still deserve consideration.

All three of these planeswalkers add to our Devotion count while simultaneously offering varied threats. Chandra, Torch of Defiance is especially nice since it offers card draw and ramp, both of which are sorely needed by any Boros deck.

If we were playing green we'd opt for mana creatures over mana rocks. Alas, Boros doesn't give us the luxury. Here's the best we can do:

A couple notes on the mana rock suite: Since Iroas costs four and we'd like to cast it as soon as possible, we're going heavy on the two-mana rocks. Also, since the color requirements of our deck are so stringent, we're playing as many color-producing rocks as possible.

Lastly, I'd recommend playing as many red/white lands as possible. This is difficult with Boros since there are fewer enemy-colored lands than there are ally-colored lands. Still, I think even Boros Guildgate and Stone Quarry are worth it. If you want to cast your Goblin Chainwhirler and Benalish Marshal on time, you'll need all the help you can get. Though something like Slayers' Stronghold is on-theme, the colorless mana will cost you tempo more often than not.

That's all for now. What did you think of this series? What mechanic would you like to see built around next? Let me know in the comments!