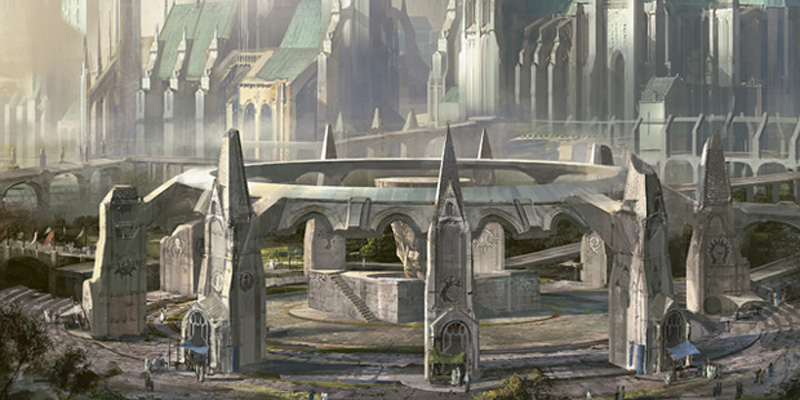 If you’ve been drafting Ravnica Allegiance on Magic Arena, there’s one deck you probably wouldn’t mind drafting every time. No, I’m not referring to the Goblin Gathering deck. I’m talking about the Gates deck!

Guildgates are cool. They allow us to play up to five colors of mana, they have great artwork, and they carry special synergies with a select few cards. Plus, for the EDH player, they’re delightfully inexpensive. So, today, we’re going to build around the mechanic of Gates.

What’s that you say? Gates aren’t technically a mechanic? Okay, you’re right about that one. Gate is a subtype of lands and their payoffs are not actually mechanics. However, in game, they behave close enough to our previous mechanics, such as Devotion. So let’s try it!

Here on the Mechanically Minded series, I like to start things off with our commander. This week, since we’re working with such an open-ended mechanic, it should be easy to pick a commander, right? Not necessarily.

For starters, we definitely want all five colors. This allows us to play every Gate. So let’s head over to the 5-Color Commanders page to see what we find.

Ideally, we’ll find a commander that interacts favorably with lands in some way. However, 5-color doesn’t seem to offer that. We’ve got several tribal payoffs, some powerful effects, but nothing especially synergistic. So let's eschew synergy in favor of raw power.

Jodah, Archmage Eternal is an excellent commander for any five-color deck. Though he doesn't interact with lands specifically, he's incredibly powerful. Also, he reminds me of Luke Skywalker in The Last Jedi. Astral projection, anyone?

Now that we have our commander, let’s start building. We'll begin with our signature mechanic:

Guilds of Ravnica brought us a new Gate in the form of Gateway Plaza, which brings us to a total of 11.

There is no Gates theme in the Theme section of EDHREC (sad face), but we still have options beyond our core Gates. I’d like to start with this one:

Come on. You know you want to. Maze’s End is the classic goofy build-around. It’s not especially good, but when it works, it’s hysterical. It’s also a nice focal point for deckbuilding. Let’s enter Maze’s End into our search bar see what we find.

Plaza of Harmony is on-theme, though for some reason not a Gate itself. Gates Ablaze and Open the Gates will likely be two of the best cards in our deck. Growth Spiral replaces itself and can potentially ramp us into a turn four Jodah. Wilderness Reclamation gives us access to our Gates on our opponents’ turns, even if we’ve just played them. All welcome additions.

Moving down to the Signature Cards section, Circuitous Route and District Guide provide additional access to our Gates. Cards like these and the aforementioned Open the Gates are all green, so we’ll lean toward that color when we get to our mana.

Here are several other essential Gate cards we can’t forget:

A nice start. But what about our payoffs?

All the Gate Payoffs

We’ve already included most of the Gate payoffs, especially the newer ones. But there are still more to be had! Here are some of the best ones:

Of all these cards, I’m most excited about Crackling Perimeter. It provides a legitimate win condition. In a stalled out late-game board, we could deal five or six damage to each opponent each turn. Double that if we’ve got Wilderness Reclamation online.

So now that we’ve got our payoffs established, we need to find some powerful enablers. Let’s head back to our Maze’s End page for ideas.

Tempt with Discovery, Expedition Map, Sylvan Scrying, Hour of Promise, Ulvenwald Hydra, and Knight of the Reliquary all let us tutor Gates from within our library. Let’s also not forget Crop Rotation, Realms Uncharted, and Scapeshift.

Wargate is a card I’ve always wanted to play but never had a deck for. Though somewhat taxing on our mana, I believe the versatility is worth it. In the early game, we can cast it on turn three to put a Gate directly from our deck into play. In the late game, we can sink excess mana into it to find a win condition (more on those later).

Gates are cool, but they're also... bad. When playing five colors, we usually prefer having tri-lands like Arcane Sanctum. When most of our lands enter the battlefield tapped, we’re essentially playing a turn behind everyone else. Though our payoffs should make up for that, we still want to mitigate that downside as much as possible.

Therefore, we must add cards that allow us to play additional lands, cards that untap lands, and cards that reward us for playing lands. These should do the trick:

Cool. I’m feeling a little less worried about playing so many tapped lands. Now that we answered that question, let’s move on to the next one: How do we win?

Alright, we already covered Maze’s End and Crackling Perimeter. Let’s take a look at a few other win conditions. We somehow haven’t yet seen our commander’s page yet, so let’s start there.

One of the biggest, baddest creatures ever printed, Progenitus is essentially an unblockable, untargetable, persistent threat. The best way to beat it is a board wipe, but even then, most board wipes do not exile. That means Progenitus goes right back into your library, only to return again later.

A huge mana sink with the added (albeit relatively low-impact) bonus of untapping tapped Gates. Though expensive, Zacama, Primal Calamity is a legitimately scary threat with immediate board presence and built-in versatility.

The biggest downside of expensive spells is that they’re vulnerable to counterspells. Ulamog, the Ceaseless Hunger lessens the downside by exiling permanents on casting, not on entering the battlefield. If it does enter the battlefield, this card can single-handedly take out several players.

At first glance, Kozilek, the Great Distortion might appear nearly impossible to cast in our Gates deck. With five colors, the last thing we want to do is play colorless mana sources. That’s where our commander comes in. Jodah, Archmage Eternal allows us to cast Kozilek for the much more palatable cost of WUBRG. Once it hits the battlefield, our opponents best be scared.

If you can swing the price, I recommend this Blightsteel Colossus. I hear it's pretty good.

Since we’re going to play both Vesuva and Thespian’s Stage to copy our Gates, Dark Depths becomes a legitimate combo piece. What’s more, we already have several cards that search for nonbasic lands, so we can definitely find both pieces if we need them.

One advantage of playing five colors is versatility. Many of the Guilds of Ravnica and Ravnica Allegiance split cards fit the bill because they provide an easy-to-cast front half with oftentimes powerful back halves. A few of the best:

I also like these cards from the Commander 2017 cycle of basic landcyclers:

If we can’t cast them, we can cycle them to fix our mana. If we can cast them, they’re going to be outstanding.

Now that we’ve got all that squared away, here’s our finished product:

That’s all for our Gate deck. What did I miss? What would you add? What could make it better? Let me know in the comments below!