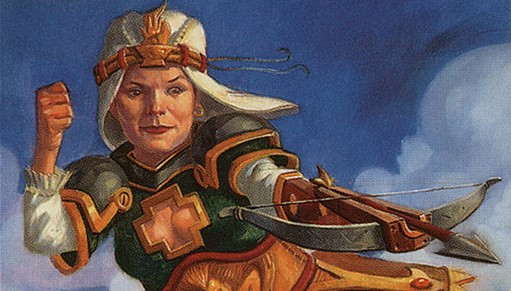 Blast from the Past

“A mage must be precise as well as potent; cautious, as well as clever.”

Sometimes, you need to go back to where it all began to know where you are going in the future.

I began writing Mind Bend with the goal of breaking down the conventional notions of deckbuilding and the color pie in order to forge new ground outside the confines of the already established. This month, I'm turning back the clock to focus on something that was established in Magic's early days but has since lost favor with the creative team behind the game.

I'm curious to see if we can revive an old strategy that has since moved on to another color. For this experiment, I've selected blue direct damage, which was represented in cards like Prodigal Sorcerer, all the way back in Alpha.

In the beginning of this great game, blue could really do everything - including dealing damage directly to creatures and players. Sometimes, that damage hurt you, like in the case of Psionic Blast, another blue direct damage spell from Magic's first set. I guess the philosophy at the time was that mind mages can think really, really hard and that somehow translates into physical damage.

For the sake of gameplay, Wizards of the Coast revoked blue's license to kill so that other colors could shine. You didn't see much by way of Psionic Blast after the first few sets, but you did see numerous Prodigal Sorcerer iterations, resulting in around 10+ unique versions of the effect.

It's surprising how many of these "pingers," as they are commonly nicknamed, are represented in mono-blue alone. It's enough to craft a deck around. To add to our opponents' surprise that we're dealing damage outside of red, why not add white, so that we're doubly red's enemy? These colors are in stark contrast to the place these effects reside in the current Magic philosophy. In dusting off some of these Psionic Blasts from the past, we'll throw our opponents for a loop, plus we get to play one more pinger: Samite Archer.

Let's first look at what EDHREC has to say about pingers in the modern Commander landscape.

In case you didn't know, Scryfall is a fantastic database for Magic: the Gathering cards. It even includes a feature that allows you to order search results according to EDHREC's deck data. I ran a search to find any and all pingers, and the first one on the list that's similar to Prodigal Sorcerer is Goblin Sharpshooter. There are a few creatures that rank higher than it, but they're either commanders, have a large mana cost, or don't hit both creatures and players.

What's interesting is that Goblin Sharpshooter's EDHREC page has a clear Goblin spin. Its top three commanders are the following:

We'll have to dig a bit deeper on this one to find our inspiration. Let's check out the red version of Prodigal Sorcerer - Prodigal Pyromancer - to see what we find.

The High Synergy Cards section is filled with red pingers like Vulshok Sorcerer, Cunning Sparkmage, and Vithian Stinger, not to mention our friend Prodigal Sorcerer.

Red's side of the party seems to be bringing more of the tapping pain, whereas many of the other cards are focused on creatures that also tap for great effect, like Arcanis the Omnipotent and Viashino Heretic, or give you extra untaps, like Fatestitcher and Kiora's Follower.

Lucky for us, the strategy revealed by Prodigal Pyromancer's EDHREC page is quite simple.

You've previously seen some of the pingers we have in our blue-white arsenal, and they share mostly the same traits - each costs 3 mana, has one or two creature types, and has a particular activation cost that may vary from pinger to pinger. You have one group that can tap for damage whenever you'd like (think Prodigal Sorcerer), and then you have others that cannot:

In the team above, you can get as much use out of them as you do Prodigal Sorcerer, as long as you do it before declaring your attack step. We'll have to make sure that our gameplan has ways to mitigate this drawback.

Other pingers have more upside, though:

Most of these upsides are minor, but still important to note. Fledgling Mawcor has flying, and its Morph ability allows us to pay its casting cost over the course of a few turns. Reveka, Wizard Savant can hit a target for two damage instead of one, with the drawback being that it won't untap during your next untap step, which we'll have to mitigate. Suq'Ata Firewalker has a little bit of added protection, just to spite red decks a little more.

Our army of little pingers might not seem like much, but this strategy really opens up when you see what payoffs a deck like this can run.

First, we have easy ways to control the board:

Basilisk Collar, Gorgon Flail, and Gorgon's Head all give our pingers an important ability: deathtouch. What this does is turn our team into skilled hitmen, ready to snipe any and all problem creatures without fail. Just one damage from a Basilisk Collared-up Rootwater Hunter is enough to send all but indestructible creatures to the grave.

Perhaps we want to mow down an entire board at once. We have ways of doing that too:

Godhead of Awe turns every creature, even the giant ones, into mere mortals with death waiting right around the corner via a Thornwind Faeries blast. It also has the added bonus of giving stompy and go-tall decks a Psionic Blast-level headache.

Polymorphist's Jest might be a one-shot effect, but it follows in the vein of format gem Sudden Spoiling. We can de-power an opponent's board, making their creatures irrelevant for a turn and setting us up with a way to take out some normally hard-to-kill targets. Purphoros, God of the Forge and all the other pesky Gods peppering Magic's history will be but dust upon which to tread on our path to victory.

When we're not straight-up slaughtering out opponent's creatures, why not just convince them to come over to our side? In this deck, Charisma and Willbreaker both essentially do the same thing: deal one damage to a creature that can survive a swift breeze, and force them to slide over to our side of the table.

Of course, we can't just stop at controlling which creatures stay on our opponents' sides of the board. We've got other ways to put our pingers to work!

Curiosity and Ophidian Eye trade damage to our opponents for cards in our hand, which is about as sweet of a deal as you can get. The fun continues with perennial punching bag Swans of Bryn Argoll. Nothing more fun that smacking that 4/3 flyer over and over again for more and more cards.

Darien gives us a nice way to trade some life for blockers, or possibly even for an impromptu army should we need one.

Of course, we will need to close out the game, so why not employ some Infect tech? Strap one of these onto one of the many pingers in the deck and make finishing off opponents a simpler task.

So far, our creatures can only hit once per turn cycle. That's not going to cut it in Commander; we need to go big.

If this were a month ago, we'd be talking about Paradox Engine first and foremost. However, as we all know by now, the Engine was too good for, well, its own good, and got struck by the ban hammer.

So, in its stead, we'll welcome a couple familiar faces from recent Planeswalker Decks: Gideon, Martial Paragon and Jace, Ingenious Mind-Mage. Somehow, we have not one, but two preconstructed Planeswalker Deck planeswalkers that untap our entire team as a plus ability. What's even better is that their other abilities actually aren't awful: Jace gives us extra cards and can steal some creatures in the late game, while Gideon can get into the red zone or maybe turn our pingers into attacking threats.

Of course, Intruder Alarm is bonkers. We can get an extra round of damage in for each creature anyone plays, plus we can outright kill players if Darien, King of Kjeldor is on the board. How? We tap all but one of our pingers, targeting a single player. With the final pinger, we ping ourselves for one, causing Darien's ability to trigger and a token to be created, which causes Intruder Alarm's ability to trigger, untapping all of our creatures, allowing for another round of pinging.

Both Freed from the Real and Pemmin's Aura turn each blue mana we have laying around into extra points of damage to any target; talk about efficient!

Going deeper, we can play the well-known combo of Isochron Scepter and Dramatic Reversal. Putting this combo together turns even a single Prodigal Sorcerer into a win. To add to this strategy, there are a few creatures and instants that do a decent job of replicating this interaction.

Energy Arc untaps our team and is a Fog when we need it. To Arms! is a cantrip that fits under Isochron Scepter quite nicely.

Elite Arcanist and Kaho, Minamo Historian each do a fine impression of Isochron Scepter. The Archanist can repeatedly untap itself when one of the aforementioned instants is imprinted on it. Kaho, Minamo Historian might only give us a single untap, but we can also tuck a few counters or removal spells under as insurance.

One last card I'd like to talk about is Statecraft. It doesn't fit into the above categories, but fits perfectly into our deck. Since our creatures are quite puny, Statecraft gives us a way to fend off attacks with pseudo-indestructible blockers before hitting whatever targets we'd like.

To lead the deck, I found one more Planeswalker Deck face card I wanted to include: Teferi, Timebender. Once he was slotted it, it seemed only fitting to select Niambi, Faithful Healer as the commander.

Teferi's daughter can fetch up the Timebender himself, which gives the deck extra gas. Teferi, Timebender can untap our creatures, draw us additional cards, and his ultimate gives us another turn to deal even more damage. All three are relevant abilities for the deck. Plus, outside of Teferi getting exiled, we can always find him again with our commander.

As a plus, I find it hilarious that Niambi is a "Faithful Healer" and we're using her to lead a deck meant to deal lots of damage.

Back to the Present

In the end, I've built something that's teetering on the edge of enjoyably playable. Perhaps we'll see some pingers come back to blue in the future? Or, perhaps more likely, we'll get a few cards that help this strategy along in other ways. What those cards are, I don't know, but maybe they're already out there and I missed them.

Either way, it's been fun resurrecting an old Magic strategy.

See you again next time for more color-bent insanity!