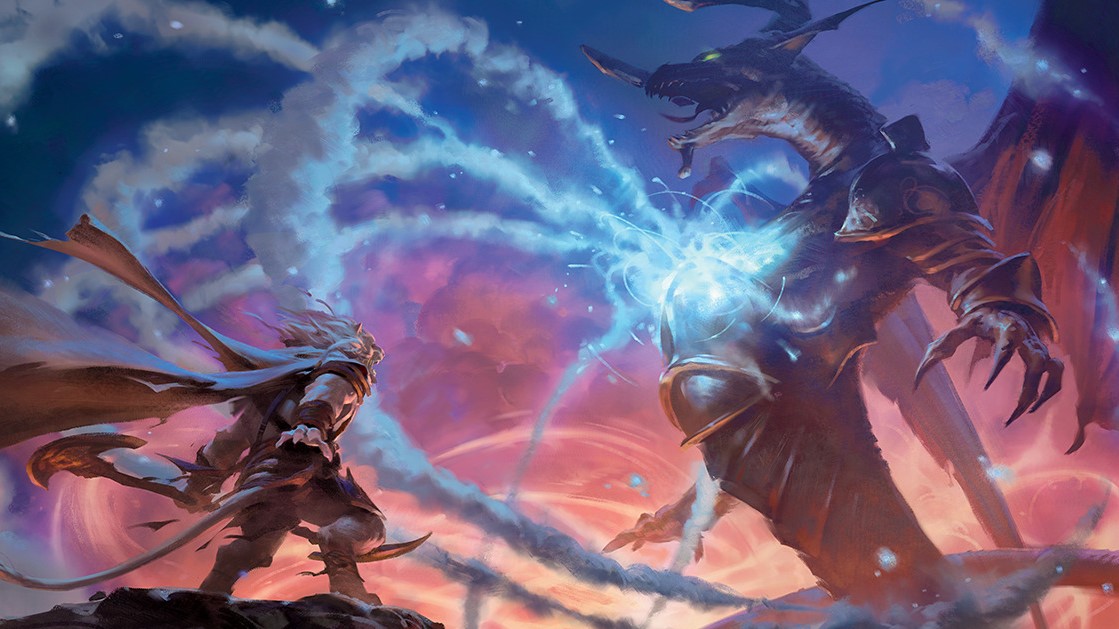 Grab Life by the Horns

The weeks leading up to the release of a new Magic: the Gathering set may be some of the best times of the year as a player. Especially after a brilliant promotion strategy through many social media channels. Soon, we’ll all finally get those sweet War of the Spark cards in our hands.

War of the Spark completes the multi-year arc in which Nicol Bolas attempts to reign supreme as the Dragon God of the Multiverse. While I won’t spoil anything in the storyline, I thought it only fitting to celebrate this long, winding journey and honor the sinister Elder dragon planeswalker, win or lose.

And I’m going to do that in the only way that Mind Bend - the article series meant to break down conventional notions of deckbuilding and the color pie to forge new ground outside the confines of the already established - knows how.

Yes, this is a tribute to Nicol Bolas. . . in green-white.

Of course, EDHREC is our best resource to see what Grixis, Nicol Bolas’s color combination, does best. Let’s look at the top 5 commanders:

Nekusar, the Mindrazer sits at number one with a pretty unique strategy: pack your deck full of Wheel of Fortunes, and punish each opponent for those wheels with Underworld Dreams and its many variants (including your Commander). To get even more punishing, add in Megrim effects so you hit them coming and going - cards in player’s hands, that is.

In second for most played Grixis commanders, Marchesa, the Black Rose is all about creature sacrifice and death abuse, looping its dead over and over, provided that it had a +1/+1 counter on it before it hit the bin. Good thing Marchesa herself helps with that problem, but many of the core cards in the deck do the same, like Unspeakable Symbol. Or, the creatures flat out give themselves +1/+1 counters, like Yahenni, Undying Partisan.

Coming in in third is Kess, Dissident Mage. Digging through her EDHREC stats, you will find a deck dedicated to low-cost cantrip spells - those that offer a small yet useful effect and also draw you a card. Alongside that strategy is a set of rituals, like Dark Ritual, that increase your mana in one go. Kess gives both of these spell types more legs, meaning they can be doubled up on to assist in its ultimate win con: Storm. The deck wants to cast tons of little effects to kill the table with Aetherflux Reservoir or similar cards that care about the number of spells cast this turn.

In fourth place, Jeleva, Nephalia’s Scourge also leverages instants and sorceries, but rather than cast small effects over and over, Jeleva wants to freely cast giant, game-breaking spells like In Garruk’s Wake early and often. Jeleva decks also push for a “play your deck against yourself” game plan, with her attack ability allowing you to pick opponents' spells. Some builders take this to the next level, adding in Bribery-like effects.

Rounding out the top 5 is Inalla, Archmage Ritualist, a Wizard tribal deck hoping to double up on its best tribal effects via Inalla’s tokens. The rest of the deck is packed to the gills with great Wizard synergy cards like Azami, Lady of Scrolls and Galecaster Colossus.

Unfortunately, while sharing the same color combination as our villainous pal Nicol Bolas, there isn’t much that we can port over to a green-white strategy. The instant and sorcery shenanigans that Kess, Dissident Mage and Jeleva, Nephalia’s Scourge employ aren’t well suited to our color-pair goal. (For something spicy like that, check out my Naya Extra Turns article for all your non-blue spellslinger needs.)

While Marchesa, the Black Rose is a very fun commander to build and play, +1/+1 counter themes are prevalent in almost every color combination now, and with additional Proliferate cards making their debut in War of the Spark, I don’t expect that to go away.

Another trend I noticed when looking at the top 5 Grixis commanders is that, outside the distinct wheels strategy of Nekusar, the Mindrazer, most decks have a central theme, but are heavily dependant on “goodstuff” spells to fill in the rest. This isn’t a criticism of any of these commanders, nor of the color combination. It's more a testament to the raw power that Grixis can provide. Why play marginal effects when you have access to Counterspell and Cyclonic Rift?

But are these strategies the correct way to go for a green-white deck for Bolas? Or is there another tactic we could try?

Nicol Bolas, the 7th most popular Grixis commander on EDHREC, is straight-up Bolas tribal, playing as many spells that depict or refer to the God-Pharaoh directly: That would be very hard to do in green-white, considering that Bolas isn’t prone to cast spells of those colors. So, to properly capture the Deceiver in our target colors, perhaps we should look into the flavor of playing AS Bolas through a strange mana lens, and do Bolas things where we can.

Let’s take a look at Bolas’s bio on the Magic website:

“Mana hungry and wielding a triple threat of blue, black, and red spells, he’s a force of villainous destruction, crushing all magic—and minds—that stand in his way.”

So let’s crush some magic, and some minds!

Parity is Meant to Be Broken

One thing you might notice when browsing through the top 5 commanders in Grixis is that many of them are about breaking parity in some way, though some do it better or more pronounced than others. For instance, Nekusar, the Mindrazer lets everyone draw additional cards, but only your opponents pay life for it. Marchesa, the Black Rose might initialize a series of forced sacrifices via Dictate of Erebos, but she’ll be the only one getting them back later. Inalla, Archmage Ritualist allows you two enters-the-battlefield triggers with your Wizards, as opposed to everyone else’s one.

Let’s start to break that parity in a way similar to Nekusar, the Mindrazer.

First, we’ll allow multiple draws per turn for each player. Howling Mine, Font of Mythos, and Rites of Flourishing give our opponents a steady supply of cards each turn without much input on our part.

Additional cards in this same vein also apply. Temple Bell and Otherworld Atlas allow us to control when those cards are drawn, whereas Anvil of Bogardan makes sure those extra cards stay in our opponent’s hands.

Alms for the Dragon God

Now, you might be wondering, “Isn’t giving our opponents extra cards the opposite of what we want to do?” Oh, this is just the start. We want our opponents to draw all those cards, but we never said anything about casting them. We’re just going to let them look at their best laid plans and watch them shrivel before their own eyes.

To do this, we need to stop how many spells our opponents can cast, despite having that full grip of cards. We’ll use Rule of Law, and its creature counterparts Eidolon of Rhetoric and Ethersworn Canonist to really put a roadblock on our opponent’s plans.

Add in more taxing effects, like Damping Sphere and the brand-new (and very flavorful) God-Pharaoh's Statue to make it increasingly hard for our opponents to sequence spells properly. My personal favorite is Aura of Silence, which punishes artifacts and enchantments for your opponents both while it's out on the battlefield and once it’s sacrificed.

Of course, a few more roadblocks would not hurt either. How about we stop players from touching us when we’re playing all our sorcery-speed cards? For that, Grand Abolisher and Defense Grid will do just fine.

We’ve stopped or stalled spells, but we need to take care of another important part of the game: combat. Luckily, we have many ways to do that. First are the taxing effects like Ghostly Prison and Sphere of Safety, which can force our opponents to choose between casting a spell or attacking just based on mana needs alone.

To add to that, we should just destroy all creatures. If we’re going to be a God-Pharoah, we should play Wrath of God, and the plethora of similar spells to put our opponents back to square one. Austere Command and Cleansing Nova give us flexibility, while Hour of Revelation is perfect as a catch-all escape plan and flavor home-run.

With those hand counts high, it’s time to spring our trap: punishing our opponents for their unplayable hands.

Iron Maiden and its creature version Viseling are the all-stars of this strategy. When coupled with our extra draw spells and especially with Anvil of Bogardan, we can ensure that we’re doming our opponents for significant damage. To add insult to injury, we have more directed effects like Black Vise and Storm Seeker that can even punish players out of nowhere.

In a similar fashion, Nekusar, the Mindrazer staple Psychosis Crawler is like a proactive version of the cards above, as we hope to make our hand count high as well.

To round out these effects, we’ll add in a few cards to mimic the ones discussed above. Sculpting Steel does a great imitation of our key artifacts. Mirrorworks might take a little bit to set up, but can be pretty powerful once online. And while Mirage Mirror doesn’t interact too well with the upkeep triggers of Viseling, it does copy a lot of other important cards in the deck and is worth its slot.

We’ve broken parity with our hand-size damage strategy, but there is also a way to break parity while under a Rule of Law: Spellshapers.

The Spellshaper creatures allow players to pitch useless spells in order to create interesting effects. Essentially, we can “cast” additional spells without regard for Rule of Law because the activated abilities feel spell-like. For example, Dawnstrider becomes a Fog we can use with our extra cards. Same is true for the multi-Disenchant provided by Devout Witness.

One spellshaper of note is Jolrael, Empress of Beasts, as she can threaten any player with a one-sided Armageddon by turning their lands into creatures in response to a Wrath of God. Really puts opponents into a bind when considering casting a Wrath on our board.

While hampering our opponents is great, and breaking parity gives us some nice leverage, we still need to win the game. What more Bolas-themed way is there than Approach of the Second Sun? With all the extra card drawing we can do, it should be easy to dig directly to it without much issue.

Since we’re already being overt in our attempts to win (how Bolas-like), Felidar Sovereign provides another simple way to lock up the game in our favor. If you feel that this card is a bit “cheap” as a win-con, you can replace it or supplement it with Test of Endurance.

One Elder to Another

To tie this whole Grixis infused, Bolas-inspired, green-white deck together, it would make the most sense to place another Elder Dragon at the helm. Dragonlord Dromoka does exactly what we want: protects our dastardly gameplan while giving us ways to score large points of life through commander damage.

A Grand Finale of Glory

Some decks are designed by card mechanics, others by the strengths of specific color combinations. Some are built with a special theme or fascinating story in mind. For this deck, I wanted to capture a feel - a thought process of a persona that you might not see otherwise. I hope I’ve trapped at least some of Bolas’s ego and “playstyle”, despite being on the other side of the color pie.

See you again next month for more color-bent shenanigans!