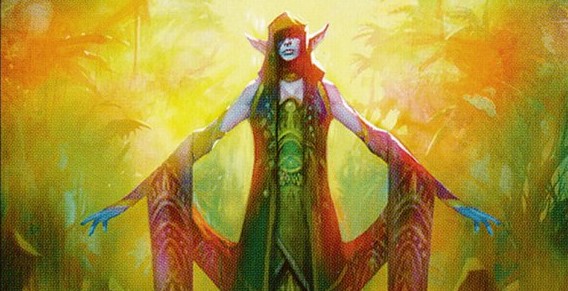 Don't Mean a Thing if it ain't Got That Sling

"To crack a mirror is to provide an opening for the reflection to escape."

Synthesis is at the core of Mind Bend - the article series meant to break down conventional notions of the color pie to forge new ground outside the confines of the already established. In each of my previous articles, I have tried to synthesize one color combination's strategy into another.

Brainstorming ideas for articles is admittedly difficult because mapping one strategy to another isn't always cut and dry. Decks like Naya Extra Turns in my initial article are like finding a unicorn or digging up cards you didn't think existed. Looking at you, Final Fortune.

But something I realized is that synthesis doesn't need to be so direct. In fact, when it comes to articles like this, following the spirit of the rule is just as valid as following the letter of the rule. This article in particular is much more about the spirit than it is the direct definition.

Spellslinging for Fun (and Profit?)

Have you ever played a spellslinger deck in Commander? Exhilarating spellslinger decks really put you into the role of a mage, casting and conjuring and manifesting your will in the forms of arcane energies, blazing infernos, and soul-consuming shadow (sounds a lot cooler than casting instants and sorceries, doesn't it?) .

You don't focus too much on what's on your opponents' sides of the board, and your usual path to victory is amassing one giant game-ending Comet Storm or getting your Storm count up high enough that Aetherflux Reservoir incinerates your opponents.

For this article, I wanted to capture the thrill of whipping through your deck, spellcaster style, but in green and black, a color combination known more for long games where you slowly come out on top with resilient threats and a whole graveyard of recursion.

EDHREC's spellslinger theme page shows that the top five commanders are each at least Izzet, with a splash of usually black or white for flavor. However, what's more interesting is what each of these commanders represents to their respective decks.

Mizzix of the Izmagnus and Kykar, Wind's Fury both effectively represent a reduction in cost for your instants and sorceries: Mizzix decreases the CMC of your instants and sorceries over time through experience counters, making larger and larger spells cost as little as two or three mana, whereas Kykar gives you a rebate of one red mana off each instant or sorcery, if you so chose to eat the Spirits he makes.

The other three commanders in the spellslinger top five all give you extra spells to sling in their own ways.

Niv Mizzet, Parun is the most straightforward of these: you cast an instant or sorcery, you draw a card. Simple.

Kess, Dissident Mage lets you Snapcaster Mage on each of your turns, but you're limited to only one spell. Luckily, the mana cost is far less prohibitive than Niv.

Finally, Elsha of the Infinite not only gives you access to the top of your library, but she lets you cast what's there at instant speed as long as it you're looking at a noncreature spell.

All together, we see that spellslinger decks place a focus on casting more spells, either by providing access to more spells to cast or by making each spell cheaper to cast.

More of That Sling Thing

Moving on to the High Synergy cards on EDHREC spellslinger page, we have the following:

I've roughly categorized the above list based on the function I see the cards performing for this strategy; what you'll see is a lopsided majority of "cantrips", or spells that instructs you to draw a single card in addition to any other effects. Normally when you cast a spell, you're "spending" a card to get an effect. These cards, like Ponder and Preordain, however, are "free" in terms of card advantage because they replace themselves (the net change in number of cards in your hand is zero). Thus, they effectively decrease the size of your deck because they expedite the search for your haymakers. They're never dead cards, as they will always give you another crack at the top of your library to find something worthwhile.

The Top Cards, when coupled with the High Synergy list above, show two smaller but equally important aspects of the spellslinger strategy, the first of which is spells that copy other spells. This should seem obvious, but when your goal is to cast as many spells as you can, being able to copy your best ones seems tantamount; cards like Bonus Round double your return on investment, as it were.

Casting more and more spells is fun in its own right, but you have to have some kind of payoff; that's where cards like Guttersnipe and Talrand, Sky Summoner shine. Each spell now represents, in the cases of these two examples, two damage to your opponents, either directly to the face or eventually from a creature, on top of any other effect. In other words, they're great ways to make the most of what you're already wanting to do!

In summary, the spellslinger archtype is trying to win the game by:

Obviously, green and black don't have the same quality of low-mana instant or sorcery cantrips like Ponder or Preordain. Sure, you can try to sneak by with a Commune with Nature, but there is another path, one that is more in line with the spirit than the letter of the rule: we're going to use creature cantrips.

I was shocked to find a whole subset of creatures in green and black that simply draw you one or more cards upon entering the battlefield. From the simple Elvish Visionary and Dusk Legion Zealot to the beefier Carven Caryatid and Phyrexian Rager, and ultimately to the robust Gonti, Lord of Luxury, there are plenty of options in these colors to add more cards to your arsenal.

The cantrippers above net us card advantage by giving us a game piece in play (to be used and abused - more on that later), and also replace themselves with another card in hand.

Black has another way to put us ahead by one card in comparison to our opponents, and this is by mass discard: Burglar Rat and Yarok's Fenlurker both put each opponent down a card while giving us a game piece. While these don't dig us down into our deck in the same fashion, they have similar use and are worth a shot in the deck.

In the decklist below, you'll see that I've focused on these kinds of creatures the most, since we want to dig as deep as we can.

Digging deeper is just what our payoffs are there to do, and since we're focusing on creatures that draw us cards, we have a few green cards that'll do just that for us.

Beast Whisperer and Guardian Project supercharge our small cantrippers into digging machines. Stick one of these on the field, and soon you've got a net positive of in cards in had for each Elvish Visionary you cast. The same goes with higher-mana cards like Primordial Sage and Zendikar Resurgent.

Less direct payoff cards are available in green as well: Abundance makes it so that we hit a business spell on each card draw instead of running into lands. Primeval Bounty gives us potent tokens every time we sling a Dusk Legion Zealot, plus added bonuses for other types of spells.

We also have a few ways to copy the creatures we're slinging.

Bramble Sovereign and Minion Reflector let us double up on the draw triggers for two more mana, while simultaneously synergizing quite well with the other creatures in the deck. Dual Nature doesn't cost us extra mana, but unfortunately is symmetrical. However, hopefully we'll be the primary benefactor in most cases. Finally, Panharmonicon does what Panharmonicon does best - make creatures with good enter-the-battlefield effects even better.

Once More with Feeling

In some situations, we might eat a board wipe and have to build up from scratch. Luckily, we've got a few cards that're great for rebuilding the army.

Creeping Renaissance and Praetor's Counsel refuel our hands quickly, giving us the chance to start over again. However, if we want to go even faster, Living Death and Command the Dreadhorde put us right back where we left off. Just the thought of drawing four or five fresh cards off of a Command the Dreadhorde sounds like the kind of Magic I want to be playing, so much so that I included God-Eternal Bontu and Viscera Seer to make that option more likely to appear.

Hoof, There it Is

We're speeding through our deck, but when we're stuck with a bunch of 1/1s and 2/2s, how do we expect to win the game? How about using those all those small creatures in an all-out attack?

Of course Craterhoof Behemoth is one of our game winners. It's almost cliche by now, but it fits the strategy perfectly. Our whole game plan is built on the backs of many small creatures and copying their myriad effects; now we can double up on the Hoof, too. We also have Beastmaster Ascension and End-Raze Forerunners for redundancy's sake.

In the commander slot, I chose Izoni, Thousand-Eyed for two distinct reasons. First is that Izoni can act as an additional outlet for card draw with her sacrifice ability. To add to that, Izoni is perfect for a post-board-wipe environment, giving you back the same number (or more) creatures as you has before the board wipe. A recovery spell and a sacrifice outlet is nothing to sneeze at, and since we're not using Izoni as a key part of our strategy, the six mana to cast her isn't the worst thing in the world. Sure, this could have been another Meren of Clan Nel Toth deck, but I wanted to live a little.

The opening sequence for this deck is straightforward: ramp and draw early, looking for a payoff card or two, then start rolling in the card advantage from there. Don't worry too much about protecting your Elvish Visionarys, but try to keep them around until you're ready to use them for your own nefarious gains.

You might have to take a lump or two from more aggressive players; your payoff cards are the ones you want to protect as they kick the deck into high gear.

Depending on where the game goes from there, you'll either be ready to strike with a well-timed Craterhoof Behemoth or recovering via Creeping Renaissance. Your recovery should be pretty quick compared to other players as your deck is geared to net you more and more cards.

We might not be slinging spells the old-fashioned way with instants and sorceries, but we're slinging tiny creatures in a very similar spirit, and while our Comet Storm might look like a giant beast called Craterhoof Behemoth, your opponents will still be saying "ow" all the same.

If this deckbuilding exercise has taught me anything, it's that getting hung up on direct interpretations of great ideas can be a hindrance to the core inspiration behind the idea. That's not to say that synthesizing an idea in a more direct manner isn't worthwhile, because it is. It's just that it's not the only avenue to take to realize an idea.

Until next time for more color-bending concepts!