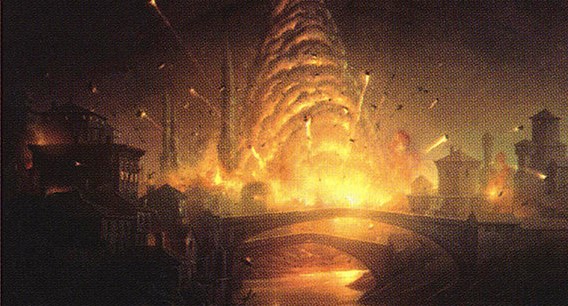 You've Gotta be Gruul to be Kind

“Nature is the ultimate mindless destroyer, capable of power and ferocity no army can match, and the Gruul follow its example.”

Although I had been playing Magic off and on for a few years, I'll be the first to admit that it took time before I really learned about the deck archetypes in Magic. I'm talking about the simple aggro, midrange, control, and combo categories we attach to just about every deck nowadays.

For newer players, probably the easiest to understand is aggro decks: aggressive strategies that try to deal as much damage as quickly as possible. Combo was a little bit more challenging to grasp at first, but once you knew the loop, it made as much sense as aggro. Instead of using your cards to deal a bunch of damage to your opponent as fast as you could, you would try to get a specific set of cards in play. Next came midrange, and with that came a more nuanced understanding of the game; midrange strategies are based around stopping early threats while still being threatening. This strategy can be difficult to pilot for a new player, but the understanding is still there. Creatures will be less frequent, but bigger, and they seek to stop the early damage before outclassing the aggressive decks in every way.

However, control might be the last one new players truly understand, and for good reason. To properly play control, you need to understand what all the other deck types are doing, particularly in your chosen format. In fact, not only do you need to know how to halt their gameplan, but, especially in multiplayer games, you need to know which threats you need to answer. Successfully piloting a control deck requires both knowledge of the metagame (a fancy way of talking about what you know about the game outside of the match you're currently playing) as well as experience within it. Also, control decks are usually the slowest on the field; you're in it for the long haul.

Surprisingly, control's main strategy has remained somewhat unchanged over time, even if the specific cards might come and go. To this point, the best color combination to represent that unflinching recipe hasn't changed either: it's still white, blue, and black, also known as Esper. With their awesome counterspells, removal spells, and commanders that accrue lots of value over a long period of time, these colors lend themselves well to a control shell.

However, this is Mind Bend, the article series meant to break down conventional notions of the color pie to forge new ground outside the confines of the already established, and I'm not here to build a traditional control deck. Nope, I'm here to stomp all over some conventional wisdom and win the long game using the rest of the color pie: Gruul. Yes, that Gruul, the guild much more interested in flattening you with beefy beats until you're a pancake, which they then eat. This is a color combination not usually known for controlling the board and playing the long game... until now.

Looking at Esper's EDHREC page doesn't contain a lot of unique or splashy cards, and for good reason. Esper's bedrock is a healthy diet of the following control staples:

Unfortunately, what we don't see on this page is the second half of the Esper control strategy: at some point, after the dust has started to settle, we want to eke out a lead and leave our opponents either dead or in the dust. Years of experience teach you that the way control turns the final corner is through a whole lot of card draw and usually a near-unstoppable threat.

Control decks need card draw more frequently because they go toe-to-toe with more aggressive decks, trading threats with answers, and card draw allows the control deck to eventually have more answers than the other decks have threats, consistently putting your opponents behind. Once your opponents are out of gas, you fire off a gigantic Sphinx's Revelation to reload your hand and slide the game towards inevitability.

While accumulating cards, eventually the control deck will find its game-shattering threat. Ofttimes, this is a single card that can end the game in a few turns without any support, though sometimes you will find control decks lean into alternate win-conditions like Approach of the Second Sun or any of the established combos prevalent in the game's history.

Luckily for us, Gruul has a great option for a game-ending threat that we can play as our commander: Atarka, World Render gives herself double strike when attacking, which means that as a six-power flying trampler, it only takes two clean hits to send someone packing. And because she's our commander, we always have access to her, always there to help us close things out. There are few commanders in the format that can eliminate players as quickly without any help.

Of course, being a multiplayer format, we need more than one threat if we want to have a chance at coming out victorious. Gruul is fortunate enough to have a murderer's row of curve-topping beaters that will fill in nicely.

Giant Adephage, Utvara Hellkite, and Liege of the Tangle all make more and more nasty threats the longer they stick around. Giant Adephage can go from 7 to 14 to 28 damage in three turns, which is more than enough to end someone's game on its own, and that's not even counting the damage the token copies are doing. Utvara Hellkite does much of the same, but in the air and with no need to connect first. Liege of the Tangle may need to make contact to get an army of 8/8s, but it makes up for it by potentially giving you a whole fleet of monsters to send into the red zone the following turn. Otherwise, you can just awaken a land or two at a time, in case you want to hedge against well-timed board wipe.

Etali, Primal Storm and Skyline Despot aren't as explosive as the above threats, but both make up for it in card advantage over time. Etali gives the deck access to other player's strategies, whereas Skyline Despot makes us the monarch before starting to churn out tokens.

All the above beatsticks cost at least six mana to cast, and as we learned about from Esper, having consistent mana on or ahead of curve is key. Thankfully, we are in green, so we have access to all the best land-based ramp we could ever want.

I don't need to sing the praises of Nature's Lore or Cultivate here; if you've been playing Commander for longer than a hot second, you know that they're good. Instead, I want to focus on a few that you might not be as familiar with.

Edge of Autumn is great in a slower strategy like this. At the beginning of the game, it's Rampant Growth 2: Electric Boogaloo. You can play this all the way until turn five with no problem. Later on, though, you can cycle it by binning a land to draw into something more useful. Remember those Modern Horizon lands based on Horizon Canopy and how they fix your mana while giving you a chance to dig one deeper later? That's what Edge of Autumn does.

Speaking of Modern Horizons, people are finally getting wise to Into the North. Yet another two-mana land ramp spell, only this time you can grab Highland Weald, or, if you really want to pack a snow land package, Scrying Sheets.

It would be remiss to play a deck full of costly threats and a healthy suite of ramp without a mana doubler or two; Vorinclex, Voice of Hunger is not the nicest thing you can do to a table, but it fits the control strategy perfectly. Regal Behemoth also doubles your mana, in addition to drawing you additional cards, while you're the monarch.

Why pay for these mana doublers? Because a key strategy in a control deck is its board wipes, and some of the best ones in Gruul come with an X in their costs.

Savage Twister and Starstorm can erase an entire board with the right amount of mana, so staying ahead of your opponents on mana is ideal. Think about it this way: our board wipes cost X and two colored mana. If our opponents play threats on curve, their power and toughness should be around that number. Two or three toughness for two mana, three to five for three mana, etc. So to stop these threats to our gameplan, we need to stay roughly two mana ahead. Thankfully, the plethora of mana doublers and ramp spells we cast can get us to and above that breakpoint with ease.

Additionally, some of these X spell board wipes can act as game-enders. With the amount of mana we can produce, we can win off of a giant Earthquake or Squall Line if our life total is even one point higher than everyone else.

Any good control deck is filled with great removal as well, and Gruul has some solid options. Beast Within and Chaos Warp are our catchalls, allowing us to deal with just about any threat we'll encounter. But these well-known instants are supported by some more quirky options.

Aftershock is about as close as red will ever get to Vindicate. Commander players love artifacts and creatures, and we can stop either, or we can stop that pesky Cabal Coffers from making way too much mana.

Speaking of stopping ridiculous lands, Gruul is the best when it comes to pinpoint land destruction. The recent Geomancer's Gambit replaces itself on use, whereas Mwonvuli Acid-Moss ramps us. Some people don't take too kindly to land destruction, but in this case, when you're sniping a Nykthos, Shrine to Nyx, the affected player likely won't garner any sympathy.

What we can't kill, we'll persuade away from hitting us. A perfectly-timed Disrupt Decorum can flip a game on its head and leave you unscathed. New from Commander 2019, Bloodthirsty Blade will consistently send an ominous threat elsewhere. An on-board Sunstone will make attacking us real tough, and it turns late-game ramp spells into more fodder.

We still need to turn the corner with draw spells, and the best way to do that in Gruul is via impluse effects like Chandra, Torch of Defiance and the also-new-from-Commander-2019 Ignite the Future. While we can't keep the cards in hand like a traditional control deck, our ramp and mana doublers should make it easy to cast multiple spells in a turn cycle. Finally, earlier in the game, Cathartic Reunion and Tormenting Voice allow us to find the proper set of spells to head into the mid and late games.

I've talked about the strategy of the deck in bits and pieces throughout this article, but here it is in its full form:

It's good to know that Gruul doesn't always have to be about "smash now, ask questions never". I think the above deck has shown that even the most wild guild can still support a more careful style of play, one that sticks it out till the late game.

Although aggression, midrange, control, and even combo might have preferred sets of colors, the archetypes are essentially colorless. All it takes is for the builder to choose what they want to do and where in the color pie they want to do it.

See you next month for more color-bent hi-jinks!