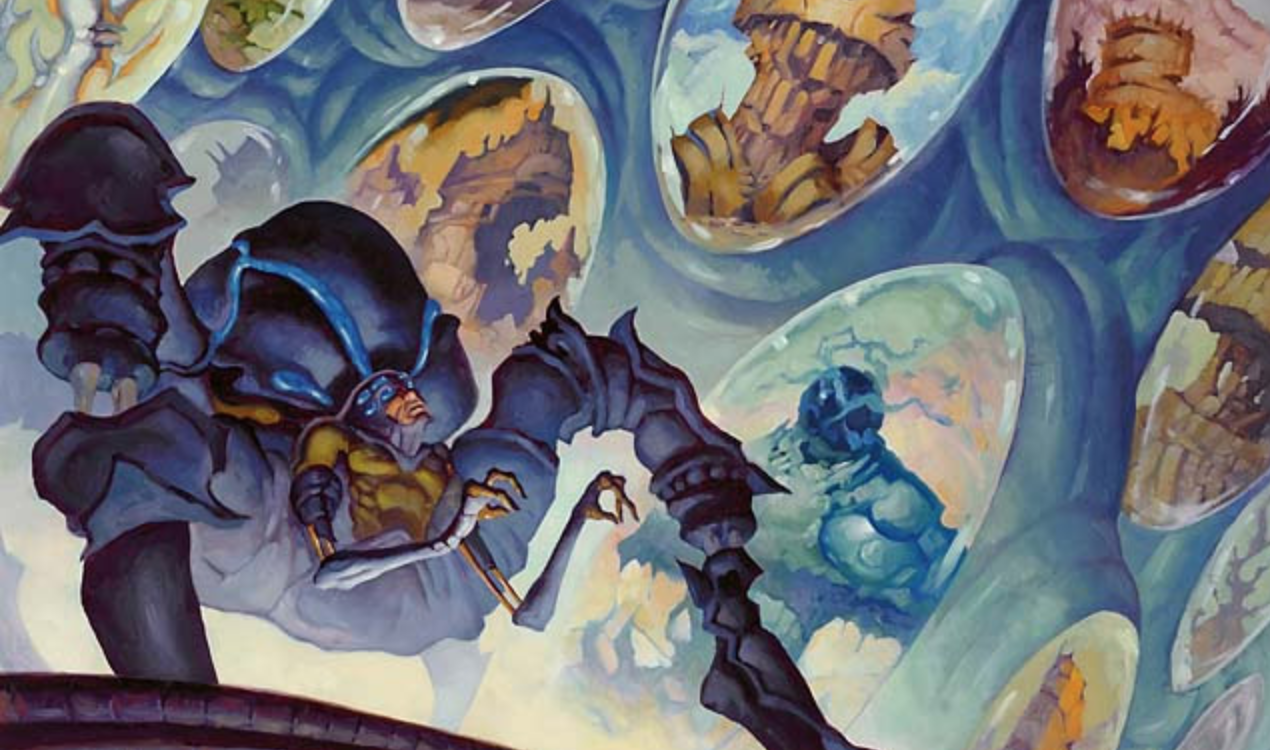 (Eyes of the Watcher | Art by Ron Spears)

Greetings everyone, and welcome back to Monomania. In this article series we build mono-colored decks as a way to explore ramp and draw packages that are synergistic with our particular deck’s strategy, and to challenge staples and misconceptions about the color pie. Today, we’re gathering our crack team to steal everything in sight.

To the untrained eye, Memnarch may seem like an awkward, unreliable card in EDH—too expensive to be effective and difficult to exploit. But it is actually a fair game-ender in conjunction with some variety of infinite mana combo. Given how casually blue can blunder into infinite mana, Memnarch is a powerful commander option in mono-blue.

The purpose of this commander is to go infinite—there’s no two ways about it. Whether it be with Palinchron and Deadeye Navigator, Isochron Scepter and Dramatic Reversal, or Grand Architect and Pili-Pala, we’re packing plenty of ways to steal every permanent our opponents control.

With that in mind, how will we supplement that strategy? While we wait for infinite mana, what will we be doing? We have to plan the perfect heist.

Putting a Plan Together

When putting together a ramp package for this commander, we have to be very sensitive to its cost. Memnarch costs seven mana but has no effect on the board without at least another four mana pumped into its second ability. We might as well think about this card as costing eleven mana, because it would feel really bad to shell out seven mana for Memnarch only for it to be removed before we can leverage its abilities. Given how extremely mana-intensive this general is, I have included a total of twenty ramp effects in this deck. With such a high density, we’re hoping to be able to leverage our general’s abilities even without an infinite combo.

Mana rocks are very important components of our ramp package in this deck. Because we have included the Isochron Scepter + Dramatic Reversal combo, we need mana rocks to tap and untap unto infinity. The more mana rocks, the better! What’s more, because of the colored mana restriction on our general’s abilities, we need mana rocks that can produce blue mana. Star Compass, for example, is basically an additional Sky Diamond.

Next, we have cards that will reduce the cost of Memnarch’s abilities. Training Grounds is an immediate inclusion in this deck, reducing the cost of our general’s first ability by one generic mana, and the second ability by two. With this enchantment on the battlefield, the entire process of making any permanent an artifact and stealing it will cost a total of four mana. Heartstone plays the same function, though is obviously worse. Even so, because we’re leaning so heavily into our commander, this card still deserves a nod.

I’ve also included a few miscellaneous ramp effects that will work perfectly with Memnarch. Vedalken Engineer is above the curve for a mana dork, and its restriction is a non-factor in this deck—we will always have outlets for this mana. Blinkmoth Urn is an extremely potent ramp tool for artifact decks. Even though it has the appearance of symmetry, we will almost always be able to abuse this mana more than our opponents. Once we start stealing our opponents’ artifacts, this card only becomes better. Finally, there’s not much more to be said about Gilded Lotus. It is expensive, but extremely effective.

In this deck, we aren’t really looking to set up a long-term card advantage engine. In this style of deck, we want heavy card filtering. As such, we have a set of draw effects that will allow us to draw at rate that is above-the-curve.

Filtering effects are exactly what we’re looking for, as seen on cards like Thirst for Knowledge and Careful Consideration. While discarding cards seems like a downside in a deck with no graveyard interaction, we’re looking to craft a winning hand rather than keep our hand as full as possible. Each of these effects dig through our deck at a stellar rate, and allow us to sculpt a hand that will hopefully lead us to victory.

I did acquiesce to a few straightforward draw effects, mainly those that lean into the artifact synergy. One With the Machine may seem weak here because I have included few high-cost artifacts, but it has a very high ceiling; if we have our commander on the battlefield, we draw a full seven cards. Thoughtcast can also help with some quick refill when we need it. Overall, though, the card advantage we're seeking in this deck isn't with cards in our hand, but by stealing things from our opponents!

The Tri-cycle tutors are extremely powerful in EDH. While these cards only replace themselves and don’t act as card advantage, they each fetch cards that are crucial to our strategy. Trinket Mage can fetch Sol Ring or Glaring Spotlight depending on the moment, whether we need efficient ramp or the ability to steal specific permanents with our commander. Tribute Mage can fetch important combo pieces such as Pili-Pala or Isochron Scepter, or it can nab us Lightning Greaves in a pinch. Treasure Mage has very few targets, but Mycosynth Lattice alone makes it worth the inclusion.

Now that we’ve looked through the ramp and draw consideration that are pertinent to this general’s strategies, let’s put it all together with a decklist. If we navigate the waters correctly, we might just get away with the big score.

Among the other notable inclusions, we have a few cards to further facilitate our commander’s abilities, some for protection, and some others just to spice up the playstyle. Liquimetal Coating is a necessary inclusion for us, allowing us to cut down on activation costs to turn our opponents’ stuff into artifacts. Padeem, Consul of Innovation is an essential protection tool for us, and if it can draw us a card our two, that’s just gravy. Mirrodin Besieged can loot through our deck turn by turn, but it can also add an auxiliary menace to our deck by threatening to knock an opponent out if the game goes long. As always, season to taste.

What do you all think of Memnarch? Have you played it in the 99? Have you ever considered it as a potential commander? Where would you have taken the general? Please let me know in the comments! Remember to EDHREC responsibly: always dig a little beyond the statistics.