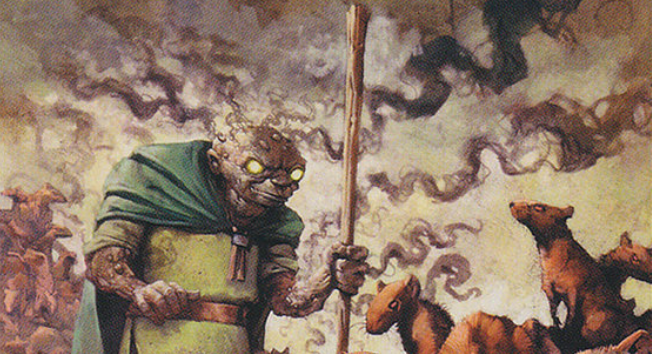 Greetings, everyone, and welcome back to Monomania Takes on Eldraine. In this article series we build mono-colored decks as a way to explore ramp and draw packages that are synergistic with our particular deck’s strategy, challenging staples and misconceptions about the color pie.

We’re back with more mono-colored action from Throne of Eldraine. Today, our commander has a penchant for mass exploitation.

Ayara is an aggressively-costed commander; if we can build a deck that swarms the board early, the incremental drain effect that she provides could easily steal games from unwary opponents. The most powerful word in her text box is 'each'. The fact that we can harass the whole table at once makes Ayara a truly powerful option. Even past the early waves of aggression, Ayara can maintain pressure into the late game if built to persist; by doubling down on drain effects and an Aristocrats strategy, we can easily set up an engine to win the game after fifteen turns.

One thing that is important to note is that Ayara would be an incredible home for a couple of infinite combos such as Gravecrawler + Phyrexian Altar. While I don’t shy away from combos, generally, I don’t think that Ayara needs them. Combos are great safety valves for decks that tend to reach stalemates on board, which is a situation that will be wholly unfamiliar to our general: she is a persistent threat on an axis that largely ignores board stalls.

Ayara wants to extract capital from her underlings; she wants to continue exploiting creatures until we funnel every point of life from our opponents to ourselves. Now that we have a direction, let’s take a look at our ramp and draw packages.

We have discussed black’s big mana package twice already here on Monomania, and while I love Cabal Coffers and company, I’m leaving them at home for this article. Ayara likes to be low to the ground, casting small creatures and cycling them through the graveyard; while big mana is never bad, it isn’t quite as useful in this deck as it is in others. In the spirit of variety, let’s look at other ramp options in black.

This Monument is the muscle of our deck: any game in which we draw this card will feel smooth as butter. Because we want to cast multiple creatures on certain turns, that discount will sometimes net us the equivalent three or four mana in said turn, a rate that's hard to ignore. The other half of the text here is also relevant to our strategy; while Bontu’s Monument only triggers on casting creatures, it does a decent impression of our commander. Doubling up on that effect can be extremely powerful for us, doubling the speed of our deck.

If everything goes to plan, quite a few creatures will die when we sleeve up this deck. These three cards are incredible ways to capitalize on this proclivity for death. Black Market will continue to produce more and more mana with each turn cycle, but it restricts the use of this mana to our turn and, not only that, to our precombat main phase. Revel in Riches and Pitiless Plunderer both produce much less mana overall, but the mana that they do produce is more flexible, available to us whenever we want to cash out. I’ve disclosed my love of Treasure and other fragile sources of mana in this article series before, and while many players cringe at the thought of temporary ramp effects, I think they can be highly effective and skill-testing resources in EDH. Deciding how and when to scrap Treasure or Eldrazi Spawn tokens is a difficult process, but if we navigate these decision points correctly, they can make the difference between a win and a loss. Revel in Riches is particularly appealing in this category of ramp because it can also errantly snag a win every once in a while.

Finally, we have two miscellaneous ramp effects that fit very well into our strategies: Treasure Map produces some of that mouthwatering Treasure for us and will also flip into another land at some point in the game, and Sword of the Animist performs well here because we'll have plenty of creatures on the board at any given time, so we won’t particularly care if they survive an attack or not.

The card advantage package of this deck is perhaps its most exciting feature. The association between sacrifice and card draw is a time-honored and institutionalized aspect of black. As such, Aristocrat strategies suffer from an embarrassment of riches when it comes to choosing between card advantage effects, and ours is no exception.

Smothering Abomination is both a sacrifice outlet as well as a source of card advantage. Notice that this card triggers whenever you sacrifice any creature to any effect: if you have a Viscera Seer on the board with this card, not only can you can draw a card for each creature you sacrifice, but you can scry before each draw as well. Dark Prophecy is one of our more resilient card advantage engines; as an enchantment, it'll be hard to remove, and it'll often allow us to dig through our deck at a blistering pace.

Finally, Bontu is absurd here. Although her ETB trigger is a one-shot effect, the option to sacrifice lands or enchantments that aren’t pulling their weight in exchange for even more cards is unique and powerful in our format.

We also have a few card advantage effects that leverage our minion-heavy strategy: Dusk Legion Zealot and Phyrexian Rager both cycle themselves, an ability that is actually subtly potent in decks that want to dump creatures on the board turn after turn. These types of creatures lend resiliency to this style of deck.

Minions’ Murmurs has long been a pet card of mine, and it is a house with Ayara. With our commander, this sorcery can casually and consistently draw us four or more cards. Give it a hard look in creature-based decks—it rarely underperforms. Minions' Murmurs only sees play in 153 decks on EDHREC, and somebody needs to remedy that situation.

The last pieces of our card advantage package are two effects that can fish cards out of our graveyard. This deck relies on a few high-impact creatures that can close out a game on their own. Gray Merchant of Asphodel, for example, will end games early if reliably recurred from the graveyard. On a board with Phyrexian Reclamation, Gray Merchant of Asphodel, and Ashnod’s Altar, we can loop our Gary incessantly for a total of five mana every time. There are several other important creatures to recur here as well—from Blood Artist to Abhorrent Overlord.

Now that we’ve examined how we’ll keep up on mana and card advantage, let’s put it all together with a decklist. While I filed off the combo edge that Ayara seems to invite, as a commander she seems powerful enough to carry a game on her own. This is always a fun position to be in; if our commander needs less support to be good, we can designate more slots to fun tech. As always, season to taste.

Among the other notable inclusions here, we have a few powerful cards adjacent to our Aristocrats strategy. First up, Cauldron of Souls is one of my personal favorites, acting both as board protection as well as a value engine in decks that sacrifice in bulk. Plague of Vermin is rightfully seeing play in 52% of Ayara decks listed on EDHREC and it's easy to see why: if we cast this card with Ayara on the battlefield, we're free to pay all of our life but one; when it resolves, each of those Rats will drain our opponents for one life. We'll end up at the same life total as before and we'll most likely destroy an opponent or two in the process.

God-Pharaoh’s Gift, along with its counterpart, Gate to the Afterlife, always tempt me when brewing but almost never make the final cut. It’s possible that they don’t belong here, but they seem to synergize with everything our deck wants to be doing: Gate rifles through our deck while Gift provides late-game value that can help us close out the game. Even if we only exile a Dusk Legion Zealot, making a 4/4 that draws us a card is decent value. Plus, the Zombie tokens that Gift produces are black, triggering Ayara’s ability.

In addition to all this, we have recursive creatures like Gutterbones, Nether Traitor, and Bloodghast to ensure we always have fodder for our aristocrats. Finally, mass resurrection effects like Twilight’s Call can also be a game-ending swing with our commander on the battlefield.

Have you all taken a gander at Ayara? Am I doing her a disservice by excluding the pertinent combos? When it’s all set and settled, who will be more popular—her or Syr Konrad, the Grim? Let me know in the comments below! As always, remember to EDHREC responsibly: always dig a little beyond the statistics. I’ll see you all on down the road.