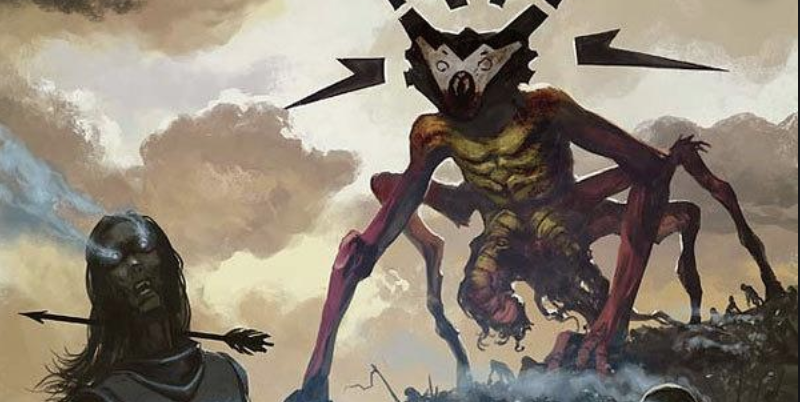 (It That Betrays | Art by Tomaz Jedruszek)

Greetings, everyone, and welcome back to Monomania. In this article series we build mono-colored decks as a way to explore ramp and draw packages that are synergistic with our particular deck’s strategy, challenging staples and misconceptions about the color pie. Today’s featured commander is a rapacious tentacle man, and all he wants to do is poke an opponent once. What's in our hand? Is it an Undertaker or an It That Betrays? That's the line between life and death.

Volrath the Fallen and I have a history. I built a budget-friendly version of this deck years ago, played it a few times, and realized that the deck’s fun factor is fairly dependent on cards that cost $10 or more. Some black decks just need Cabal Coffers, Urborg, Tomb of Yawgmoth, and Vesuva. I dismantled the deck and largely forgot about the commander until recently. In this article, I’m revisiting the first Volrath, entering a shadow dimension of unrestricted budgets, and seeing what I can put together.

The concept is simple and compelling: we want high-CMC creatures that we can pitch to pump Volrath. First and foremost, we’re hoping to kill our opponents with commander damage. However, this commander also gestures in two other directions as well. First, because we will be discarding big creatures, we might as well reanimate them afterward. This deck wants cards like Phyrexian Delver and Artisan of Kozilek. Secondly, because we’re running such expensive creatures, a big mana package is a great contingency plan to cast some of these game-ending monsters from our hand in case Volrath is no longer an option. Our build is creature-focused and loves cheating mana costs. Shriekmaw, Sibsig Muckdraggers, and Ancient Stone Idol may not be amazing on their own, but they have increased utility here because they work two shifts as big buffs on our commander or utility effects.

Volrath the Fallen only leads 58 decks listed on EDHREC but deserves a more careful eye. Because he can activate his ability more than once in a turn, it will be easy to one-shot a single opponent. Unlike other Voltron strategies, this deck also has the ability to transition into a big-creature build. Let’s get into it and see what cards will most successfully support what Volrath is trying to do.

I’ve mentioned this before on Monomania, but the big mana package available to mono-black is difficult to exclude. Unless you are pursuing a low-to-the-ground, aggressive strategy, Cabal Coffers, Urborg, Tomb of Yawgmoth, Vesuva, and Deserted Temple are almost always powerful additions. Here, they are imperative. When Volrath is inevitably removed from the board, we want the ability to cast cards that cost 10 mana or more for their sticker price. Big mana is an essential component of our ramp package for this reason.

Above we have three flex inclusions that I have chosen to supplement our other ramp strategies. Bog Witch is one of my favorite underrepresented cards to champion. This card fits into more decks than one may think. As is typical of the Spellshaper creature type, we have to discard a card in order to activate its ability, but in any deck that wants a discard outlet, this isn’t a cost as much as it is an extra benefit. In our deck, this creature can both discard a bomb to the graveyard as well as produce mana necessary to cast a reanimation spell. It only sees play in 496 decks listed on EDHREC and I’m positive there are more graveyard-based decks that want this card.

Crypt of Agadeem is perfect for our build as well, since we'll be pitching creatures to the yard with our commander or cards like Bog Witch.

Finally, Oblivion Sower is another powerful flex creature in our deck. While exiling four cards in the hopes of hitting one or two lands isn’t an amazing rate for six mana, Oblivion Sower has a few exceptional use cases that push it over the top. First, if you hit three or four lands from the top of your opponent’s deck, this is suddenly an exceptional ramp effect. Second, graveyard hate is very common in certain metas, including my own. In almost every game I play, a graveyard becomes exiled at some point. Oblivion Sower doesn’t care if a land was exiled with its ability or with a Bojuka Bog. if it’s in exile, we can snag it. Using this card to target the Lord Windgrace player, I've been able to sneak nine lands onto the battlefield.

The card advantage package is really where our deck finds some interesting, off-the-wall inclusions. We want to keep the focus on high-cost creatures and the graveyard while also including powerful card advantage effects.

These three inclusions embody our primary theme. Sndstone Oracle has a low floor but also a very high ceiling. We have several discard outlets in our deck, which means we will normally be playing with a smaller hand and have a higher chance of drawing three, four, five, or more cards.

Baleful Force is secretly a decent card. Given a full turn rotation at a four-player pod, you will draw four cards in exchange for four life. The real advantage of this card is actually how unassuming it is. If you play Vilis, Broker of Blood, an opponent may get spooked immediately and remove it on sight. Baleful Force, however, is just innocuous enough to avoid attention. Finally, the new and old Kozileks can also help us draw through our deck. The Great Distortion could even be another discard outlet for us if necessary.

Cards like Oversold Cemetery, Phyrexian Reclamation, and Tortured Existence fill a particular role in our deck, cycling creatures in and out of our graveyard. These are important pieces because they will help us repeatedly pump Volrath with the same high-cost creatures. Or, if we’re at that stage in the game, we could play a bomb like Emrakul, the Promised End every turn and force our opponents to remove it again and again.

Meanwhile, cards like Undead Gladiator and Grave Scrabbler don’t provide us with card advantage directly, but do fulfill that very important role in our deck, once again cycling cards in and out of the graveyard. Undead Gladiator is another underrepresented card in our format, only seeing play in 437 decks. This card can help fill in gaps and sculpt bad hands into better ones. You can discard irrelevant cards or a creature you want to reanimate. Whatever you use the Gladiator for, he fits right in with Volrath.

With all that set and settled, let’s take a look at the deck as a whole. Ramp and draw take up an outsized proportion of slots here because we want to ensure that we play our six-mana commander early and power out beaters as fast as possible. There are still other notable inclusions, however, that we can dive into. As always, season to taste.

Emrakul is at the top of her class in this deck. While she doesn’t pump Volrath to lethal, she does everything we want—she provides a significant buff, has a discount effect, and can hose a player out of the game in a pinch. In addition to this, I’ve also included many other Eldrazi such as Void Winnower, It That Betrays, and Pathrazer of Ulamog. These cards can sneak a win all on their own if necessary. Phyrexian Delver leads the team of reanimation effects present here, including Entreat the Dead, Animate Dead, and Blood for Bones. Finally, I’m highlighting Empty the Catacombs here to advocate for its inclusion both with our commander and with Syr Conrad, the Grim. This card can refill your hand with fodder for Volrath. In a well-tuned Syr Conrad deck it could just end the game on the spot. I can’t believe this only sees play in 185 decks.

What do you think of the old Volrath? Does this style of deck have a chance or is it just too slow? What did I miss? Where have I gone wrong? Let me know in the comments below! Remember to EDHREC responsibly: always dig a little beyond the statistics. I’ll see you all on down the road.