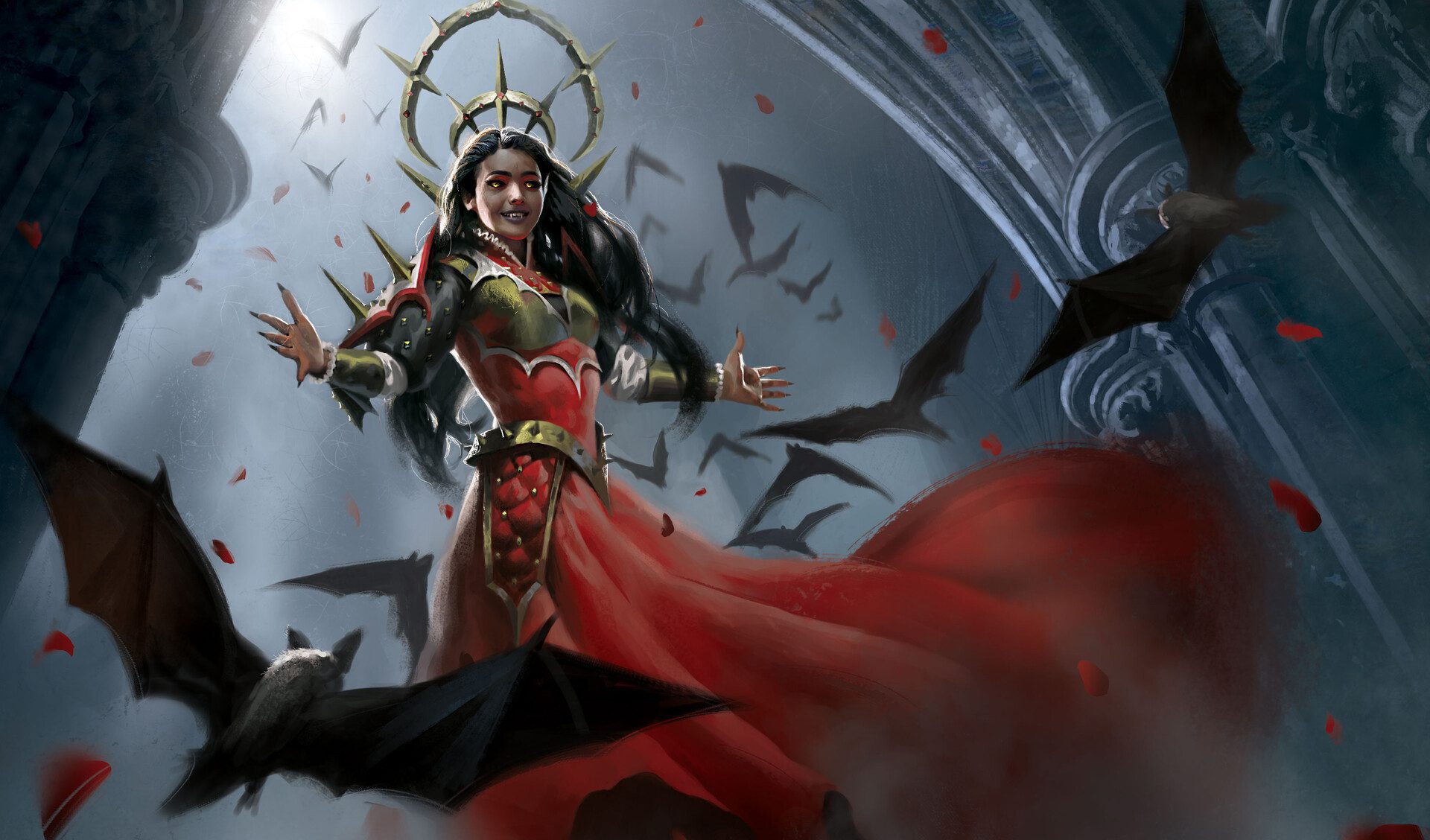 Creepy Crawlers of the Night

Hello! Welcome to Nearly Identical, a series where I take a look at two commanders that share similar designs and archetypes, examine what sets them apart, and help you find your next commander. Today, I'm taking advantage of the spooky season to talk about one of my favorite characters in Magic, Edgar Markov.

Edgar is the infamous progenitor of Vampires on Innistrad and has recently found himself betrothed to Olivia Voldaren. With the release of Innistrad: Crimson Vow, we find out that our once wrathful Vampire lord has been dug up from his coffin and has become Edgar, Charmed Groom. While Vampires are immortal, time has not been too kind to Edgar, and he's even losing a little color. No literally, his color identity has shifted from Mardu to Orzhov.

Edgar, Charmed Groom still holds on to the same design that Edgar Markov had: creating Vampire tokens and pumping them up, but Edgar, Charmed Groom is considerably watered down. The pump to our Vampires is just an anthem instead of +1/+1 counters, and he only makes tokens on our upkeep if he's died and flipped over to Edgar Markov's Coffin. Of course, another powerhouse Edgar wasn't going to be printed into a Standard set, but there are some hoops we have to go through to even start building our token army.

Both of our commanders want to make a ton of Vampire tokens, but what we do with those tokens is how we'll develop our gameplan. For Edgar Markov, I'll be including ways to pump up all our tokens to the max and have a fast and lethal board state, and for the Charmed Groom, I'll be turning him into an Aristocrats deck that'll take advantage of our Vampires dying, but first, let's see what kind of Vampires we want in the first place.

We need cheap Vampire lords, like Legion Lieutenant, that can pump up our tiny Vampire tokens into a larger army, and Welcoming Vampire is a great draw engine that lets us replace the creature we just played to get even more Vampires onto the battlefield.

Vampire tribal often leans into an aggro strategy, but plenty of Vampires want to drain our opponents too, so Vampires like Sanctum Seeker will ensure that our opponents' life totals will go down, either through combat or through life loss.

Since Vampires are more aggro than other tribes, we're susceptible to board wipes, as it'll clear the board of all our hard work. That's where Edgar Markov comes in.

A Legion of Bloodsuckers

We benefit from Edgar Markov's Eminence ability by casting cheap one- to three-mana Vampires. Shadow Alley Denizen is an excellent one-drop that gives our Vampires intimidate whenever a black creature enters the battlefield, and since Edgar's ability always makes a black Vampire, we'll be able to reliably trigger Shadow Alley Denizen and make sure key Vampires are able to get through.

While we're not including every one-drop Vampire to the deck, it's still important that we have a low curve. Vampire Socialite fits right into the curve as it's a Vampire we can play early and help our army grow as we make opponents lose life. She's even relevant if we cast her later in the game, as she can come down and give every Vampire counters. I like this Bloodthirst-type of effect like we see on Bloodlord of Vaasgoth but on a much cheaper (and less clunky) creature.

Stromkirk Captain falls in line with our package of Vampire lords. A three-mana creature that not only gives +1/+1 but also gives first strike? Pair this with Vault of the Archangel and you've got a deadly army on your hands.

Now that we have an idea of what our creature package looks like, how do we plan on getting them to be big?

I have to give credit to Joey Schultz for talking about Mercadia's Downfall in his Upping the Average series. There aren't a lot of combat tricks in Vampire tribal, so a card like Meradia's Downfall isn't one you'd expect in an Edgar list. However, being able to swing in with a ton of 1/1s and suddenly have them become 7/1s in a matter of seconds is a sight to behold.

Shared Animosity will provide a similar effect to Coat of Arms, but one that only affects our attacking creatures, and Mirror Entity will allow us to push through the late game by pumping up our Vampires at instant speed. However, going tall isn't all we want to do in the deck; with Edgar Markov there truly is strength in numbers.

Midnight Arsonist is a great new inclusion in Edgar lists since it will, at the very least, destroy two artifacts, but with a board of Vampires, this becomes a Vandalblast on a body. Cards like this and Champion of Dusk reward us for getting as many Vampires out on the battlefield as possible.

Malakir Bloodwitch is one of my favorite Vampires in the deck. She's the perfect Vampire to play if we either want to end the game or bring our opponents down to a low enough life total so that we can swing in and finish them off. I love finding ways to bring her back with cards like Bloodline Necromancer or Nullpriest of Oblivion to get extra triggers.

Finally, continuing on the trend of life drain, Throne of the God-Pharaoh fits in perfectly. Once we've gotten damage in with our Vampires, we'll get to drain everyone for each tapped creature we have at our end step.

Age has not been kind to poor Edgar, so after being dug up from his Coffin, we see him struggle to wield the army he once had. Because of that, we'll need to find ways to support him in his old age. We had very few sac outlets in Edgar Markov, so in this deck, I'm adding Vampires like Viscera Seer that can sacrifice our commander when we need to start building our army.

Sanguine Spy is a new sac outlet that lets us smooth out our draws and can even be card advantage if we've filled our graveyard, and since this version of Edgar will be more focused on aristocrats, we can use Patriarch's Bidding to bring back all our Vampires that our opponents thought they put to rest. Since our creatures will be dying, how can we take advantage of that?

We have a lot of Vampire aristocrats, the most notable being Blood Artist. Cruel Celebrant and Vindictive Vampire are among a handful of blood drainers that we've included in this list. There isn't much to say about these as they all do pretty much the same thing, but I did want to highlight Marauding Blight-Priest, which synergizes beautifully with all our aristocrats since they're gaining us life too. We're effectively doubling the life loss triggers for each death trigger!

Now that we know our gameplan, what kind of synergies can we add to Edgar, Charmed Groom that's unique to just this Edgar?

Pyre of Heroes does two things we want: it allows us to tutor up Vampires we need, and it's a sac outlet for our commander. Since Edgar is four mana, we'll be able to pull out two of our best creatures in the deck: Champion of Dusk and Malakir Bloodwitch.

We're already sacrificing Edgar, so Ratadrabik of Urborg will give us a token copy of his front-facing side while we make tokens with Edgar Markov's Coffin. One thing that's important to note, though, is that the token copy of Edgar, Charmed Groom will not flip over if it dies, since copies of a dual-face card only copy one side, but Ratadrabik of Urborg still synergizes with other legendary creatures in the deck, like Elenda, the Dusk Rose.

Notably, the Vampire tokens Edgar makes have lifelink, so Vampires like Veinwitch Coven will bring back key creatures that we've lost along the way. Edgar, Charmed Groom is a bit more fragile than his old self, so it's important that we have ways to recover after board wipes.

Edgar Markov's popularity as a Vampire Tribal will be a hard one to beat. The second-most popular Vampire commander is Strefan, Maurer Progenitor, with nearly 3,000 decks, and while I appreciate that he rewards us for playing higher-mana-value Vampires that usually aren't played in Edgar Markov, it's still nowhere near as strong as the progenitor himself.

So which commander do you like more? Are you a big fan of Edgar, or are you sick of seeing him across the table? Let me know in the comments below!