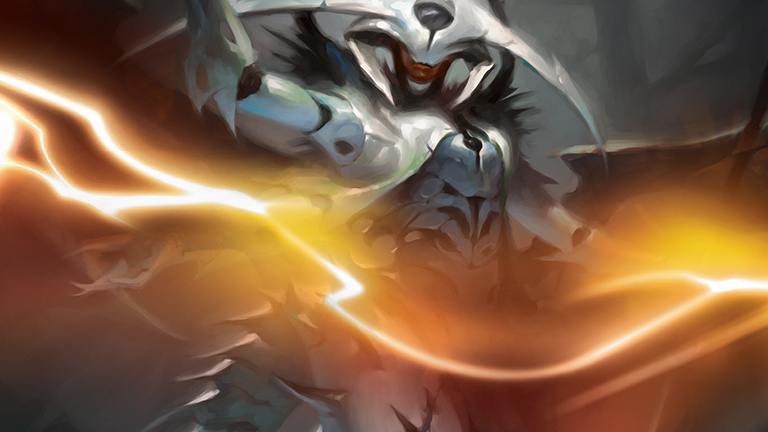 Hello friends and fellow brewmasters, welcome back to EDHREC and the second installment of Non-Basically Speaking. This article series strives to identify non-basic lands that could be recognized as valuable staples or hidden gems in accordance with their visibility on EDHREC. Assuming that the average reader has successfully tuned their decks with regards to mana base, a healthy portion of this series focuses primarily on utility lands and their viability on a per-commander or theme basis.

Today we will evaluate the number one ranked commander in all of EDHREC-land, Atraxa, Praetors' Voice. In an unprecedented onslaught of deck-list submissions, Atraxa has surpassed the previous king of the hill, Oloro, Ageless Ascetic, by a few hundred decks and currently wears the crown of the most popular Commander deck. What is it that attracts so many Commander players to the Phyrexian angel? In my humble opinion, Atraxa's unique incorporation of keyword abilities along with her potent counter proliferation makes her appealing to Spike, Johnny, Jenny, Timmy and Tammy alike.

Before we jump into the deep end of the counter pool I need to mention the plethora of different ways to build an Atraxa EDH deck. Among the most prevalent are Infect, Super Friends, and +1/+1 Counters, but there are plenty more. Keeping this in mind, I will strive to keep a well-rounded opinion on today's topic of discussion as it pertains to different play styles and deck builds. Now then, let's focus our eyeballs on the EDHREC community favorite Non-Basically Speaking: Atraxa, Praetors' Voice

We would definitely be amiss to jump right into non-basic land recommendations for Atraxa without first acknowledging what players have already sleeved up into their 99. Right away we can recognize that the top utility land recommendations computed by EDHREC are lands that were included with the pre-constructed deck, Breed Lethality. This is understandable. A great deal of deck builders use a portion of the existing land base provided in the store-bought conglomeration as a starting point in their brewing process. Not only that, but the good folk at Wizards are fairly decent with including cards with a certain amount of synergy in sealed product these days. Let's take a look at what we have, shall we?

The Phyrexian's Choice Award for most popular utility land in an Atraxa EDH deck goes to: Opal Palace (49% of 1767 decks). While Mirrodin's former beauty can add an additional coin to any of our other counter wielding peasants in the deck, she has a tough time finding a way to use her ability to proliferate herself. It may seem a bit greedy at first seeing that Atraxa already has an astronomical amount of powerful keyword abilities, but hey if our angel wants a few counters who are we to deny her? For an additional colorless mana and using Opal Palace to cast Atraxa, she will enter the battlefield with a number of +1/+1 counters equal to the number of times she has been cast from the command zone this game. Our lady commander can now use her ability to proliferate herself and give our friends another reason to fear the Angelic Horror in kitchen table land. Fantastic!

A copy of Ash Barrens (29% of 1767 decks) can be found in each of the five Commander 2016 preconstructed decks for good reason. Four color commanders are a bit taxing when it comes to casting them in a timely manner. Ash Barrens allows us to color fix with basic lands in the early game so Atraxa can impact the battlefield by turn 4.

While Reliquary Tower (26% of 1767 decks) may be a residual leftover of tailoring the Breed Lethality Commander deck to our personal liking, there is no doubt that this prominent utility land can play an important part in the Atraxa player's game plan. EDHREC has an abundance of card-drawing recommendations for our not-red commander, with one of the juiciest targets being Fathom Mage (50% of 1767 decks). Fathom Mage has the potential to draw gobs of cards from our library when used in conjunction with Forgotten Ancient (44% of 1767 decks) or Deepglow Skate (74% of 1767 decks), so being able to keep our cards courtesy of Reliquary Tower is a nice option.

Before we move on, I feel it is only appropriate to include Gavony Township (18% of 1799 decks) as an honorable mention. While the Township could be an all-star in +1/+1 Atraxa themed decks, its lower than expected representation on EDHREC is indicative of the number of different ways to build around 2016's most popular commander.

With such a strenuous demand on mana fixing to accommodate four colors, Atraxa deck builders often find themselves with a finite amount of room left to try out colorless land options. That said, it would be hard not to include a land that can threaten opponents while serving as a contingency plan in our list of win conditions. Inkmoth Nexus has the ability to turn into a 1/1 Flying Artifact Creature with Infect until end of Turn. While one point of poison damage per turn may seem like we are moving mountains with a spoon, don't forget that once an opponent is poisoned Atraxa can proliferate those counters. Add in the possibility that Inkmoth could acquire +1/+1 counters and we now have a poisonous menace that no one wants to deal with. A great addition to our non-basic land base no matter what archetype of Atraxa deck we decide on.

Another intriguing option for all Atraxa deck types is Llanowar Reborn. In addition to being a green mana source, this utility land comes into play with a +1/+1 counter and wields the Graft 1 ability. Graft triggers when a creature enters the battlefield thereby giving us the option to move a +1/+1 counter from Llanowar Reborn to that creature. Since Atraxa needs help acquiring her own counters, Llanowar Reborn provides us a nice option of getting the process started. However, if we decide to wait and let the flower bloom, we can proliferate and/or use doubling measures to increase the amount of counters on Llanowar Reborn and ensure more graft triggers. With a healthy supply of rations we can use Llanowar Reborn for ourselves or politically to offer +1/+1 counters in exchange for temporary alliances or favors. Once we get our opponents hooked on the counter drug we can entice them into further deals by providing occasional proliferate effects from time-to-time or as the situation arises.

A potpourri of lands that have storage, charge or depletion counters can be seen nestled into the nooks and crannies of the bottom of Atraxa's page on EDHREC. Vivid cycle lands like Vivid Grove (23% of 1767 decks) provide a safe manabase that is easy on the wallet while Dreadship Reef (39% of 1767 decks) can act like a pressure cooker; slow, but explosive. While the aforementioned lands are cool and all, I am definitely a sucker for uniqueness and revitalizing old cards. Assuming that we already have a healthy stable of lands that can tap for any of our Dark Bant colors, why not try a couple of counter lands that do not require charging and enter the battlefield untapped? Gemstone Mine and Tendo Ice Bridge provide us with our spectrum of colors as long as they have counters on them. Lucky for us, our Atraxa deck is built around proliferating counters so we should have two solid plots that we can tap into for any color of mana.

Atraxa Synergy to Impress Your Friends

This portion of the article looks for style points and the opportunity to release an inner-Johnny to impress our friends. We have previously mentioned how storage lands are usually one-shot drains of a sluggish charging process. However, what if I told you that there is a storage land that we don't have to bleed dry when we need the mana? Let's take a look at the high risk, high reward recommendation of City of Shadows.

Now-a-days we are spoiled with our utility lands being able to tap for mana in addition to providing us with a trinket of assistance during our game. In 1994, however, this was not always the case. Magic the Gathering's™ early history is littered with a large number of lands that provide some utility, but did not tap for mana. City of Shadows provides a colorless mana for each storage counter on it, however, it enters the battlefield barren of storage counters and unable to tap for mana. In order to add a storage counter to City of Shadows we need to tap it and exile a creature we control. This isn't a bad thing. Although it is not a stereotypical sacrifice outlet, it does provide some benefits and with Atraxa being a magnet for spot removal, we will receive ample opportunities to activate City of Shadows.

Once we get that ever-so-important first storage counter on the City of Shadows, the sky is the limit on how much colorless mana it can produce. In addition to our commander's proliferate ability, cards like Vorel of the Hull Clade (45% of 1767 decks) will begin piling on the counters until this hidden treasure from The Dark is producing a ridiculous amount of bubbling crude.

What if we don't have a creature to exile right away? Are we worried about City of Shadows not tapping for mana? Of course we are. Again, high risk, high reward. However, we can minimize the chances of a desolate mana producer by building some fail safes into our Atraxa EDH deck. EDHREC recommends two cards that not only bring about full functionality to our 22 year old relic, but are also vital pieces of mana fixing. Our saving grace from an empty city is Chromatic Lantern (57% of 1767 decks). The lantern adds the option to tap City of Shadows for any color of mana in addition to its other abilities. Along these same lines is Urborg, Tomb of Yawgmoth (20% of 1767 decks) which makes this land a swamp in addition to its other land types so it can tap for black mana.

Atraxa is a highly targeted commander and City of Shadows can go a long way to paying a hefty commander tax. If you are intrigued about adding this card to Atraxa, I highly recommend purchasing it now. City of Shadows is on the Reserved List and will steadily increase in price. At the time of this article, EDHREC is pulling in a price tag of $9.95 from MTGPrice.com.

That's all I have for you today EDHREC friends. Now it is time for discussion. Are you playing Atraxa? If so, what archetype are you playing? Is there a non-basic utility land that is an all-star in your brew? Be sure to let me know in the comment section below!

On to the next!
—wallyd