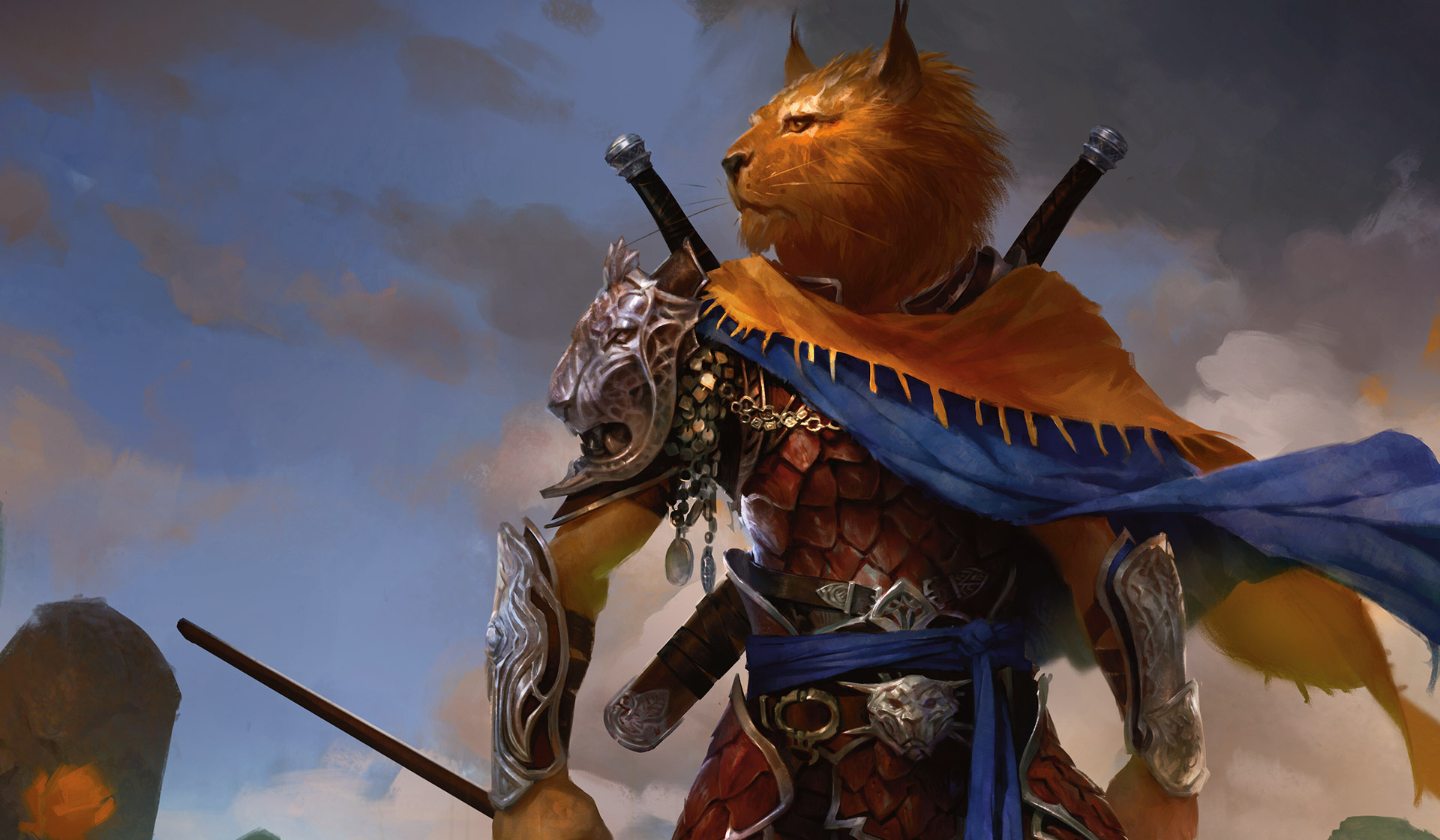 Hello friends and treasure seekers, and welcome back to EDHREC and our continuing biweekly column, Non-Basically Speaking, the series that strives to identify non-basic lands that should be considered valuable staples or hidden gems based on their visibility on EDHREC.

I have to admit, selecting a topic of conversation this week was a bit tough to decide. The wrapping paper is still on the floor from the gifts we received in the Commander 2017 product, but there are so many cool spoilers to talk about from Magic's newest plane of Ixalan. My solution? Why not both? Here's the plan folks, I want to steer the ship in the direction of a less popular, but underrated, commander from C17 and plunder a few of the riches from Ixalan to slide into the 99 along the way. Are you with me? Great, let's begin the voyage!

Tucked away within the confines of the Feline Ferocity Commander 2017 deck is the next generation of mono-white equipment voltron, Balan, Wandering Knight. Madam Balan has a couple of unique, equipment-centered abilities that should inspire players to give her a second look for existing or future equipment-themed brews. I'm sure that most Commander veterans have witnessed powerful, tide turning moments at the hands of a creature with double strike so our goal of the deck will be to include equipment that benefits from the resolution of two instances of combat damage.

In order to get Balan into double strike beast mode, we need to have at least two pieces of equipment attached to her. Under normal circumstances, the mana investment necessary to pay for equip costs would deter us from playing a commander like this. However, this feline heroine has an ability that can attach all equipment we control to her for the low cost of two mana. For example, if we have three Swords in play, we simply pay one and a white, and voltron this gal up. This ability can be activated as soon as she storms the battlefield; at instant speed. It's like activating a high power magnet purchased directly from the ACME corporation.

Today's decklist revolves around suiting up Lady Balan and sending her into the red zone to reap the rewards of battle. Incorporated into our voltron brew are decent options for card draw, ramp, and spot removal. We also have a crew of twenty loyal creatures that can provide protection or pick up a sword and advance the mission in case Balan has troubles staying on the battlefield. With our strategy in place, let's take a look at Balan, Wandering Knight, non-basically speaking!

Perhaps the most frustrating aspect of a mono-white Commander deck is the lack of card draw. It is well documented that white is basically terrible at replacing or adding resources in the form of cards in hand. While we do have options such as Puresteel Paladin (72% of decks), Alms Collector (39% of decks) and Mind's Eye (0% of decks) on the list, some of our best card draw opportunities will be procured in the red zone. Our equipment theme can generate card advantage in the form of an attached Sword of Fire and Ice (44% of decks) and Rogue's Gloves (0% of decks). If Balan, Wandering Knight hits a player while in double strike mode, the afore mentioned equipment will net us a total of four cards in hand along with a few points of fire damage to sling around as we choose.

Non-basically speaking, we can solidify our cause by including Sea Gate Wreckage. While Sea Gate is a less than ideal source for card draw, it does have the ability to get us a card or two when the gas tank is resting on "E". Interestingly enough, Sea Gate Wreckage is not currently recommended for Balan on EDHREC, so hopefully this little morsel will find its way into more future deck builds. New Benalia, on the other hand, does make an appearance on EDHREC with a 15% inclusion. This nifty land from Future Sight has been giving players the opportunity to Scry 1 long before the two colored scry lands of the Theros block.

The release of Ixalan will bring with it another non-basic opportunity to scry and draw. Let's take a look at these new treasures!

The dual-faced cards in Ixalan are unlike any we have seen before. This time around, we have enchantments and artifacts that will "flip" into a land if certain conditions are met. In most cases, the front side of the card is a navigational tool that thematically leads the player to hidden lands and locations in the world of Ixalan. The Flip Lands found on the B-side of the card are beautiful pieces of artwork with a map-inspired frame.

Treasure Map may be a bit slow for our game plan, but the power to scry 1 can definitely be underrated. Especially in a mono-white deck starving for deck manipulation. Of course, once we place three landmark counters on the treasure map, its true rewards will be obvious to all!

"X" marks the spot as we navigate to the other side of the card, Treasure Cove. When we flip into this hidden land we will find three pieces of treasure that can be sacrificed at any time for mana or pawned off one by one in exchange for drawing a card. Finding the treasure in this cove was well worth the hunt! The Dowsing Dagger. Off topic, this sounds like a fantastic name for a tavern in Dungeons & Dragons. On topic, a fun and well-designed equipment that should provide interesting game moments. Giving an opponent two plant tokens doesn't seem ideal, but if properly presented, politics could help form a temporary truce or a favor we will cash in on at a later time. In the meantime, Balan just needs to swing in and connect with the +2/+1 bonus provided by the dagger. When this happens, we arrive at the Lost Vale. Our equipment becomes a land infused with the power of a Gilded Lotus. Mana ramp achievement unlocked! Arguably, Maze of Ith is one of the best non-basic lands of all-time. It provides a controlled defense that keeps a big bad from slapping us in the noggin for a ton of damage. However, Maze has always had the drawback of not being able to tap for mana. While we can use cards like Urborg, Tomb of Yawgmoth or Chromatic Lantern to circumvent the lack of mana production of this classic non-basic from The Dark, main decking the Maze can be a bit of a hindrance when our mana supply is a bit on the dry side.

We can use a Thaumatic Compass, however, to finally discover the reality of a "fixed" Maze of Ith. By navigating the terrain with the compass, we are able to search our library for basic lands and put them into our hand to ensure we don't miss a land drop. During our upkeep, if we control seven or more lands, we will have found the Spires of Orazca. For our Balan Commander Deck, the Spires of Orazca will produce a colorless mana or provide a defensive option against a massive opposing threat. Fantastic! In this article, we were able to introduce an interesting candidate for an equipment-themed brew and get a glimpse of the new double-faced flip lands from Ixalan. We should continue our non-basic discussion by acknowledging a few more relevant inclusions in our Balan mana base. Let's dig in, shall we?

Nykthos, Shrine to Nyx falls a bit shy on the power scale in comparison to a Cabal Coffers, but 33% of Balan deck builders on EDHREC agree that the potential is here to flood our mana reservoir with white mana.

Throughout the course of a friendly Commander game, it is almost certain that board wipes, combat, and targeted removal will send quite a few of our creatures to the graveyard. Sun Titan (54% of decks) and Emeria Shepherd (13% of Decks) are fantastic sources of recursion. 41% of Balan deck builders also support getting Emeria, the Sky Ruin (41% of Decks) online to help with the resurrection duties.

Living in the trenches of an EDH battlefield is going to draw some attention. Possibly even some "crack-backs" when it comes to an opponent's attack phase. We have already discussed the defensive effectiveness of Spires of Orazca, so adding Kor Haven (12% of decks) as an additional shield versus beefy creatures is an absolute must.

Sejiri Steppe is an interesting non-basic that taps for white mana and can give Balan protection from a color until end of turn. A well-timed land drop of the Sejiri Steppe should help us penetrate enemy lines and get the combat result we are looking for. This land is currently not recommended by EDHREC but rather just one of those janky cards that I like to stir into my deck brews.

While Grand Abolisher (32% of Decks) wards off some potentially harmful blue magic, Cavern of Souls is worth every penny to keep our kittens from being countered.

Finally, the top rated non-basic land for Balan, Wandering Knight is Rogue's Passage (50% of decks). Teamed up with Ixalan's Lost Vale or Nykthos, we shouldn't have too much trouble paying for safe passage and backstabbing an opponent for lethal damage.

Did we just create a theme deck? Yes, I think we did. Funny how things coincide. Did you know that EDHREC has recently launched a new feature called "Themes"? EDH themes are prevalent in a wide array of Commander builds and include decks built around game features such as Artifacts, +1/+1 Counters, Wheel Effects, Lifegain, Tokens, and you guessed it, Equipment. If we take a quick gander at the Equipment Theme page on EDHREC we can review popular commander choices for deck brews based around equipment. At the time of this article, there is a total of 3434 Equipment decks for your viewing pleasure. Balan, Wandering Knight only accounts for 36 of those decklists, whereas Kemba, Kha Regent stands tall as the top choice for Equipment themed decks with 421 entries into the EDHREC database. Nahiri, the Lithomancer, Zurgo Helmsmasher and Sram, Senior Edificer are other popular choices in the top five. Heck, fellow litter-mate Nazahn, Revered Bladesmith has 120 Equipment themed decks built around him already. Now it is up to you to help close the gap. Hopefully, after today's discussion, you will be on your way to create and submit your own Balan, Wandering Knight decklist!

That's all I have for you today my EDHREC friends! What do you think of our next generation mono-white Equipment commander? What are some cards you would recommend for this deck? Are you as stoked as I am about the new flip lands? Have you tried out the new theme feature on EDHREC? Let's discuss in the comments below!