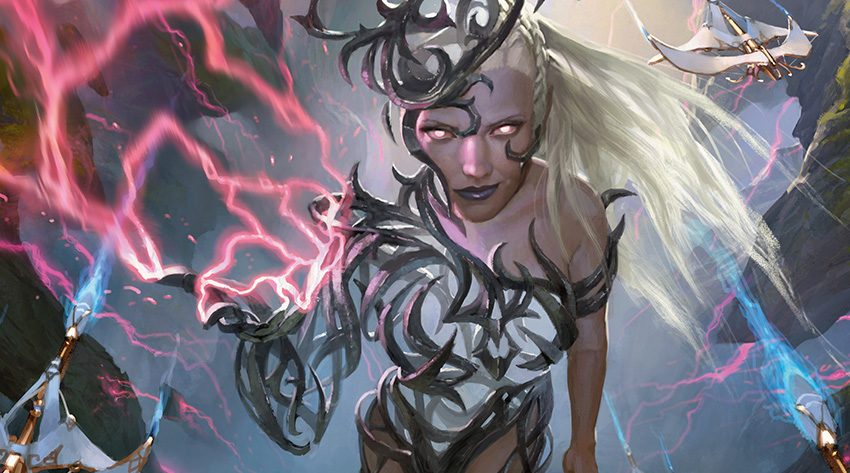 Hello friends and fellow artificers, welcome back to EDHREC and our continuing biweekly column, Non-Basically Speaking, the series that strives to identify non-basic lands that should be considered valuable staples or hidden gems based on their visibility on EDHREC. Assuming that the average reader has successfully tuned their decks with regards to mana base, a healthy portion of this series focuses primarily on utility lands and their viability on a per-commander or theme basis.

This week's column continues looking at the Commander 2016 product and the second hottest commander in all of EDHREC-land, Breya, Etherium Shaper. Initially Breya and her two thopters seem a bit underwhelming in the eyes of many Commander players. However, as tappedout.net began soaking up innovative deck lists, Breya's page on EDHREC became infused with ideas, suggestions and revelations to get our beloved thopter queen running on all cylinders.

There are quite a few tribal decks churning about the Internet, and most strategists seem content on carving their win conditions out of game winning combos. While Breya is not the red, blue artifact legend that Commander players have been clamoring for, she still lends herself nicely to a deck that focuses on sacrificing, recurring and tutoring for artifacts. Keeping that in mind, let's take a look at the final cogs in our four color artifact machine.

As always, we begin our non-basic adventure by scouring the landscape for resources to identify what other engineers already sleeve up in their 99. The top selections for non-basic lands in a Breya deck are on point with a grindy game plan to search out, retrieve, or exploit important pieces of this energetic ensemble. Let's take a look under the hood!

Our most consistently utilized utility land is Buried Ruin (61% of 1403 decks). This land can be sacrificed to return an artifact from our graveyard to our hand. A definite backup plan to our back up plan, which is why it was included in the Commander 2016 preconstructed deck, Invent Superiority.

Another way for us to get a trinket out of the trashcan without scrapping a mana source is Academy Ruins (33% of 1403 decks). Academy Ruins can reclaim an artifact and put it on top of our library. Sure, conveying our artifacts back to our hand one at a time via the top of our deck could cost us a card draw, but Breya has several resources to help alleviate these type of setbacks. A well known, and proficient acquaintance, is Padeem, Consul of Innovation (53% of 1403 decks) who should help smooth out the transition of our invaluable utility land getting an artifact from graveyard to hand.

Inventors' Fair (60% of 1403 decks) from Kaladesh is another land that is highly touted for Breya and understandably so. As long as we control three artifacts (ahem, Metalcraft) we can sacrifice Inventor's Fair, search our library for any artifact card and put it into our hand. Sounds like a fantastic way to finish out that three piece combo and win the game!

Without a doubt, the Artifact Land cycle from Mirrodin are the fashionable choice when it comes to constructing a Breya artifact EDH deck. EDHREC shows a high percentage of deck builders include these lands in their Not Green artifact conglomeration. In an effort to plot out multiple scenarios when determining worthwhile card inclusions, let's take a quick look at the bad and the good of Mirrodin's iconic landmarks.

Running artifact lands in our artifact deck just feels right. What's the worst that can happen? Um, how about Destroy all Artifacts? EDH favorites such as Vandalblast, Nevinyrral's Disk, and Austere Command break the chain of our well oiled machine and wreak some serious havoc. Egad, can you imagine the size of a late game Bane of Progress used against us? When all artifacts are destroyed not only do we lose our most prominent mana resources like Chromatic Lantern and Sol Ring, but we could also lose our artifact lands. Of course Darksteel Citadel will weather the storm on a large portion of artifact mass removal, but Merciless Eviction and Perilous Vault are other disgusting tide shifters that can seize up the pistons of our artifact machine.

However, a few boardwipes shan't deter us from running our synergetic land drops. There is a ton of upside that we can exploit with these fragile pieces of real estate. For example, let's imagine that it is turn three or four of a casual game of Commander and we have an active, but lone, Master Transmuter on the board. We could activate the Transmuter returning Seat of the Synod to our hand and fortify our game plan by putting Darksteel Forge (46% of 1403 decks) into play. Plus, if we haven't played our land for turn, we can put the Synod back out there and now, it's indestructible. All of our artifacts benefit from having a Darksteel Forge on the battlefield so cheating it into play using our artifact lands is quite nifty.

Continuing on. Hand to battlefield shenanigans with our artifact lands are groovy, but graveyard to battlefield mode also brings about good times. Mischievous tinkering is bound to take place with a Goblin Welder or Daretti, Scrap Savant in play. When we are down to the bottom of the barrel, sacrificing an artifact land can get things chugging along once again. Personally, I really like the value from swapping Great Furnace for Solemn Simulacrum again and again to ramp and draw, ramp and draw.

With Breya, I am sure that we will rarely need to use an artifact land to restart our game engine or get us out out of a jam, but they are a nice resource if we run out of options.

Breya's Diamonds in the Rough

The non-basic land recommendations on EDHREC are fairly solid but there are a few cards not represented. While the following diamonds in the rough may lack a bit of power in their punch, they do offer some craftiness for players searching to find that janky tech to impress their kitchen table friends.

Assuming you are keeping up with current events then you know that Standard has a couple of infinite combos in the mix. One of those combos is Wandering Fumarole and Aether Revolt's Crackdown Construct. Wandering Fumarole is a nice color fixing addition in its own right for a four color deck, and it has the ability to become a 1/4 elemental creature until end of turn. However, if we activate the Fumarole's "0" ability an infinite amount of times our Crackdown Construct gains an infinite amount of power and toughness until end of turn.

For the sake of simplicity, let's say we just activate Wandering Fumarole's ability 86 times. What do we do with an 88/88 creature? We swing in and stomp-stomp an opponent in the face. That's what we do. What if there are creatures in the way? Well, Whirler Rogue (13% of 1403 decks) or Key to the City are on theme and helps the Crackdown get through untouched to lay the smackdown. We could also rely on the non-basic land Rogue's Passage to get the metal giant through. Heck, it's a little off theme for Breya, but why not finish the game by lighting the mechanized marvel on fire? Chandra's Ignition is a smoldering hot finisher that allows for a three card combo to roast our opponents.

With a bountiful garden of tutors at our disposal, there is nothing we cannot find in Hot Esper (WUBR). With this in mind, let's take a look at arguably the most situational tutor we could jam into a Breya deck, Tolaria West. This legendary blue source has the Transmute ability which allows us to discard it and search our library for a card with converted mana cost of 0. While Tolaria West may seem like we are putting a rusty muffler on a brand new Beamer, it deserves a mention for those that want all the tutors at their disposal. Let's take a look at what it can do, shall we?

For high-roller Breya EDH pilots, Tolaria West could easily fetch Lion's Eye Diamond (6% of 1403 decks) to complete a three card combo with Breya, Etherium Shaper and Auriok Salvagers. We could also Transmute for mana ramp (Mox Opal or Mana Crypt) or snag our Tormod's Crypt to serve a bowl of graveyard hate to the Meren of Clan Nel Toth player in our playgroup. Oh, by the way Tolaria West can also seek out lands from our library. Remember that Wandering Fumarole combo we were just talking about?

If we could drizzle a few more non-basics into the colorless mana reservoir, let's take a look at Phyrexia's Core as an additional sacrifice outlet. We can never have too many ways to take out our own trash. How about another resource for our thopter tribal builds? The ability is slightly mana intensive, but Foundry of the Consuls is on theme and can net us a few drones. Two more thopters might even finish the game with Mechanized Production strategically in place.

Wowzers. We sure have mentioned a lot of non-basic lands that demand to be sacrificed to activate their utility effects. It's unfortunate that Crucible of Worlds is carrying such a high price tag. The Crucible is a no-show on EDHREC recommendations for Breya. It seems like a decent inclusion in a Breya deck, what do you think? Is it because the price tag matches a nice dinner out with the family?

That's all I have for you this week my EDHREC friends. What are your thoughts and opinions on Breya, Etherium Shaper? Did this article help give you a few ideas? Is there an obvious non-basic land choice for Breya that I failed to mention? Let's discuss in the comment section below!

On to the next!