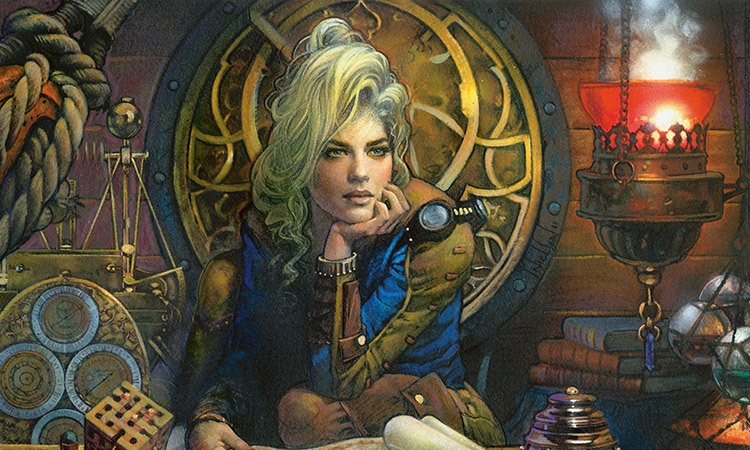 Hello friends and fellow distinguished classmates, welcome back to EDHREC and our continuing biweekly column, Non-Basically Speaking, the series that strives to identify non-basic lands that should be considered valuable staples or hidden gems based on their visibility on EDHREC.

Today we play host to our opponents by providing breakfast, lunch and dinner in the form of card draw. We will disguise our malicious strategy with the aroma of group hug by introducing friendly draw effects like Howling Mine and Font of Mythos to the table. Unbeknownst to our friends, it's all part of our master plan to "fatten up" their hands with goodies and when they least expect it, shove them into the Iron Maiden!

Yep, this guy that writes the Non-Basically Speaking column has finally fell out of the old-man rocker. I know, I know. In theory, winning with Iron Maiden is implausible, if not totally impossible to pull off. Iron Maiden will be lucky to cause one or two points of damage to an opponent during their upkeep. By itself, it has the threat level of a piece of cake. Mmmm. Cake. However, with the right ingredients we could build around this Urza Legacy bulk rare and pull off an occasional "what the heck just happened" type of victory. Let's take a look at some of our key strategies and the non-basic lands that will help us cook up a pot of insanity. Ready to put your friends in the Iron Maiden? Excellent!

Trying to win with one card is a challenging task, to say the least. Iron Maiden is an artifact, and it can be easily destroyed by a myriad of removal. That is why I have chosen Hanna, Ship's Navigator as the top chef in the stew we will be brewin'. Hanna's ability allows us to retrieve an artifact or enchantment from our graveyard and put it into our hand. Our commander today is provided merely as a resource for the rest of the 99. She is a fantastic utensil to have, but hopefully their won't be too many times we have to bring our master chef out of the command zone Kitchen.

With Hanna on board it's time to include non-basic lands that are recommended to us by EDHREC to build in some redundancy. Academy Ruins (49% of decks) will be an absolute all-star at digging goodies out of the trash. With the juiced-up amounts of card draw in our Hanna deck, putting an artifact from our graveyard on top of our library won't slow us down in the least. Another recommendation courtesy of the EDHREC algorithm is Buried Ruin (30% of decks). While using Buried Ruin to get an artifact back to our hand does cost us a colorless mana source, it is a decent safety net in desperate times.

Unfortunately, if our key enchantments or artifacts are exiled, Hanna won't be able to help us. To keep from turning in our knives on Commander Top Chef we can utilize the transmute ability on Tolaria West (22% of decks) to seek out Claws of Gix (28% of decks). With Claws of Gix on the battlefield we can sacrifice our artifacts and enchantments to keep them from being exiled or combine them with Hanna to reset a card like Black Vise.

Fire Up the Grill

Despite the outrageous price tag, Serra's Sanctum is a reserved list treasure that still shows up in 22% of the 309 Hanna decks on EDHREC. This legendary land from Urza's Saga provides a white mana for each enchantment we control. Hanna will get some decent use out of the Sanctum seeing that the deck is filled with a good portion of enchantments like Dictate of Kruphix and Propaganda. However, the true power of this vanilla flavor mana maker comes from setting up a card drawing geyser with Enchanted Evening (39% of decks) and Minds Aglow (0% of decks). Now might be the opportune time to mention another well-worthy inclusion into our card drawing torture machine, Reliquary Tower. The Tower ensures we keep every single card we draw and comes well recommended by 54% of the decks submitted to EDHREC.

You can buy Serra's Sanctum on Card Kingdom for about $55-$65. This card is absolutely insane in enchantment heavy decks and I encourage everyone to obtain a copy before the price gets too far out of reach.

So now what? Our opponents are drawing a ton of cards, but chances are they are able to play multiple spells every turn and discard down to seven at the end of their turn. A spicy Minds Aglow or Prosperity with Iron Maiden, Viseling or Phyrexian Metamorph copying Maiden, might zap them once, but how do we keep everyone's hands stuffed turn after turn?

Next to Iron Maiden the next best entree on the menu is Anvil of Bogardan. While our friends continue to feast on the abundance of card draw we provide them, the Anvil ensures they keep a full grip in their BBQ-stained digits. Mass-bounce spells like Cyclonic Rift or Crush of Tentacles will turn up the heat, leaving our opponents chewing on a ton of options with no time to swallow. Arcane Laboratory or Mana Breach mixes well and brings everything, including tempers, to a boil.

With Anvil of Bogardan and an Iron Maiden-type effect in play, we can wrap up the leftovers and bring home an impressive victory. Unfortunately, we may need to do so with a couple of cards that are definitely in the gray area of the EDH Social Contract, Static Orb and Winter Orb. With Iron Maiden, Anvil and an Orb in place, a spell like Sunder could be the final bite that has our friends bringing out the white flag of surrender.

After we come to grips with our role as good guy turned villain, it would be nice to have a few ways to make the Orb lock down effects not as painful for our side of the board. An absolutely delicious idea would be to include Blinkmoth Well. Looking closely at Winter Orb and Static Orb we can see that they only work if they are untapped. Therefore, we can use Blinkmoth Well to flip the switch on the orbs from "on" to "off" at the end of our opponent's turn. This will give us a healthy untap step and then relock the board so our opponents can continue to feel the effects of torture at the hands of the orbs and the Iron Maiden.

Let's imagine for a second that we didn't complete our shopping list and were forced to lay down an Orb in attempts to buy us some time. In this situation Soldevi Excavations provides us with a little bit more gas to fuel the spells we need to get things in order. When it enters the battlefield we have to sacrifice a land, but this relic from Alliances then taps for two mana (one colorless, one blue). This is definitely the land we want to be untapping if we can only untap one each turn. Better yet, Soldevi Excavations can continue to prove its worth at other points in the game with it's ability to tap and Scry 1. When we are constantly digging for puzzle pieces a non-basic land with the ability to scry is a fantastic option to have! Not too shabby for a card that is nearly invisible on EDHREC.

This Little Piggy Went to Market

High Market is another secret ingredient you won't find on Hanna's EDHREC page. Our Hanna deck utilizes quite a few enchantments that definitely help crank up the heat on our opponents and add some spice to our game plan. What better way to extract a key enchantment from our library at instant speed than with Academy Rector. By using our non-basic land to sacrifice the old lady, we can put an enchantment directly into play. What we choose will depend on the situation. We could get our Sphere of Safety for defense, Well of Ideas for card draw, or Planar Collapse to wipe the board. If the situation is really looking bleak, we could seek out Divine Intervention in an attempt to win the game by not winning. Or losing, for that matter.

Dessert is not on the EDHREC Menu

Are you all filled up on non-basic land recommendations or did you save some room for dessert? How about one more non-basic land we can run in our Hanna, Ship's Navigator Commander deck that is not recommended on EDHREC? We have talked extensively about drawing cards and filling hands, so why not include Mikokoro, Center of the Sea? In this deck we never get tired of drawing cards, and Mikokoro provides us with additional opportunities to feed the table.

That's all I have for you today my EDHREC friends! Thank you for joining me on this most excellent adventure! What do you think of our Hanna Iron Maiden EDH Deck? Am I absolutely insane? Could this deck win in your playgroup? Will your friends hate you for bringing it to the table? Let's discuss in the comments below!