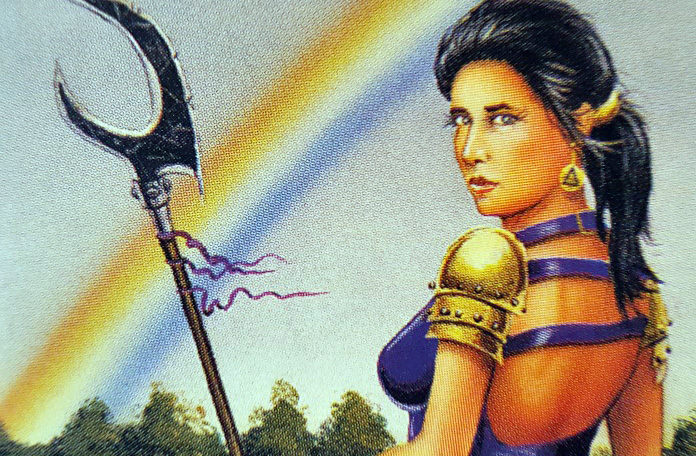 Hello friends and forgotten Legends, welcome back to EDHREC and our continuing biweekly column, Non-Basically Speaking, the series that strives to identify non-basic lands that should be considered valuable staples or hidden gems based on their visibility on EDHREC.

At this point in my Commander career I believe I owe it to myself to build a Commander deck around a Legendary creature from Magic's Legends expansion. Interesting fact, over 50 characters capable of sitting in a command zone were printed in the Legends set. Unfortunately time has not been too kind to these misfits of yesteryear and their power level for today's game is considered mediocre, at best.

Nevertheless, there are a few candidates from Magic's ancient world that are both beloved and successful twenty-five years after their printing. Our most popular, according to EDHREC, is Nicol Bolas and Angus Mackenzie. Both commanders have a solid following. In fact, I highly anticipate a larger flood of Nicol Bolas decks on EDHREC with the upcoming release of Hour of Devastation.

Today I want to discuss building a deck that relies on the commanders "fog" ability to protect its Planeswalkers and win conditions from combat damage. However, we won't enlist the services of the $80 reserved list treasure, Angus Mackenzie. Nope. Instead we are going to flip our deck brew into super-challenge casual mode and select an Esper commander that only provides 24 decks worth of information on EDHREC, Lady Evangela

While Lady Evangela's activated fog ability seems underwhelming in comparison to Angus Mackenzie, we will spend the next few minutes trying to maximize her potential and tackle a "pillow fort" idea from a whole new angle. Unfortunately for us, EDHREC's data shows a strong tendency to build cleric tribal for our chosen leader so it looks like we are on our own for the most part with regards to card recommendations.

One of our primary win conditions includes ticking up our planeswalkers with full intent to bore our friends into submission by obtaining their emblems. Tamiyo, Venser, Jace, and Dovin all have ultimates that help us achieve this goal. In addition to our planeswalkers we can also look at winning the game with Azor's Elocutors or Luminarch Ascension. Imagine a scenario where we roll our Riptide Shapeshifter into a Deepglow Skate at the end of our opponent's turn to create a filibuster win with Azor's Elocutors. #commandergoals.

We do have one thing stopping us from achieving our goals; our opponents. Needless to say, I don't think they are going to standby and let us do what we want. In fact, I am quite certain we can expect a barrage of combat headed in our direction so let's take a look at how we can protect ourselves and our Esper Super Team.

You Shall Not Pass

Unlike Angus Mackenzie, Lady Evangela's fog ability targets a creature. We can use this to our advantage by employing the services of Willbreaker and Horobi, Death's Wail. Simple enough, if we target an opponent's creature with Lady Evangela while Willbreaker is in play, we gain control of that creature. If Horobi is in play, we destroy that creature. We can show restraint with these powerful deterrents by issuing threats and making political deals or we can don our villainous cap and either take or destroy to control the board. With our entire deck focused on winning by ticking up Loyalty, Filibuster or Quest counters, rattlesnake strategies such as these should dissuade our friends to point their ground-pounders in another direction and leave us alone.

Here are a few more synergies that could give us a tactical advantage when it comes to avoiding combat damage:

Let's take a quick gander at what this casual, unconventional Lady Evangela deck might look like and see how we can formulate our mana base to intensify the wackiness Non-Basically Speaking!

While our Lady Evangela deck may not be true "pillow fort" type action, there is one non-basic land that is an auto include in deck archetypes that strive to thwart attackers from inducing combat damage, Maze of Ith (38% of Decks). This classic piece of Magic's past first originated in the 1994 set, The Dark, and was quite elusive to obtain a copy until recently when it saw a reprint in 2016's Eternal Masters.

By simply tapping our Maze of Ith, we can untap an attacking creature an opponent controls and prevent all combat damage that would be dealt to or dealt by that creature this turn. In a world of one-shot voltron commanders and Eldrazi finishers designed to annihilate other players, the Maze of Ith has become a cornerstone of Pillow Fort Technology.

However there is a drawback for Maze of Ith and that is the fact that it does not tap for mana. For this reason we will need to count the Maze as a spell slot, rather than a land when we are building our deck. Furthermore, we should definitely auto-include Chromatic Lantern and Urborg, Tomb of Yawgmoth to lend Ith's Maze the ability to produce mana in times of need.

Our second non-basic monster stopper is Kor Haven (29% of Decks). Unlike the Maze of Ith, Kor Haven does provide a drop of colorless mana to help generate fuel for spells, but the ability to "pseudo-fog" a creature requires two mana plus Kor Haven to activate. With Kor Haven, Maze of Ith and/or Lady Evangela strategically in place we have established a makeshift wall of protection. Let's also not forget that both Maze and Kor Haven work well with Willbreaker and Horobi, Death's Wail at controlling the critter population on the table.

Our next piece of utility is a necessary requirement due to the astronomical amount of hexproof and shroud present from game-to-game. While Lady Evangela and our targeted "fog" lands can provide us with an advantage, creatures that cannot be targeted shred the blueprints of everything we are trying to accomplish. Thank goodness we can include Arcane Lighthouse (15% of Decks). For one mana and tapping the Lighthouse all of our opponents creatures become vulnerable to targeted removal and abilities. Heck, Lightning Greaves alone is found in almost 50,000 EDH decks according to EDHREC, further solidifying the need for including a method of dealing with shroud and hexproof in our Lady Evangela EDH Deck.

Pot of Gold at the End of the Rainbow

This would normally be the section that we discuss hidden non-basic gems. But, since Lady Evangela only has 24 decks on EDHREC, I am guessing this entire decklist could qualify as a hidden gem. For us filthy casuals, anyway.

Adding just a dab of utility to our game plan is Skyline Cascade. When the Skyline enters the battlefield, target creature does not untap during its controller's next untap step. While this effect may seem minuscule, there could be several scenarios throughout a game of Commander at the Kitchen Table where this becomes relevant. This inexpensive common from Battle for Zendikar could keep Arcanis the Omnipotent from drawing it's controller three cards or Kydele, Chosen of Kruphix from flooding the board with mana. Heck, maybe we just use it to keep a big voltron beater from smashing us in the face for a turn.

We can further exploit the Skyline by running Oboro Breezecaller. With the Breezecaller we can return Skyline Cascade to our hand and play it again. Better yet, the ability also allows us to untap a land. This is perfect if we need to protect ourselves a second time with Maze of Ith.

Next up is Minamo, School at Water's Edge. All around win-win situation here. The School produces blue mana, does not come into play tapped and can be used to untap a Legendary creature. Minamo will be quite handy when we need to get a second activation of Lady Evangela or Ith, High Arcanist. Do we have Willbreaker or Horobi, Death's Wail on the battlefield? Yes? Well then, let's use Minamo, School at Water's Edge on opposing commanders for the ultimate in steal and destroy schemes.

Our final song of the day sings the praises of another lost relic from Legends, Urborg. While the internet and Commander pop culture grows increasingly aware of this Legendary land from Magic's infancy, most Commander players have still not seen the original Urborg. Urborg has a unique ability to remove First Strike or Swampwalk from a target creature. While this ability may seem to have minimal impact on a game of commander, it will help us set up blockers if a Sheoldred, Whispering One is crashing in on one of our Esper aligned members of the Gatewatch. Yep, a creature with Swampwalk that is attacking a planeswalker is unblockable and if our Commander is not online to stop the attack, Urborg can help direct the nemesis into our Guard Gomazoa.

Urborg comes into play untapped and requires nothing more than a deck slot that would have simply been given to a basic swamp. Not only that, but we can use the ability in conjunction with, you guessed it, Willbreaker or Horobi, Death's Wail to steal and or destroy almost any creature on the board.

Somewhere, Over the Rainbow

Are you interested in seeing what else Horobi, Death's Wail can do in Commander? Be sure to give fellow EDHREC author, Andrew Cummings' article Ultra Budget Brews - Horobi, Death’s Wail a read!

That's all I have for you today my EDHREC friends! What can we do to improve Lady Evangela? Is this deck totally implausible or insane? What route would you go with this commander? What other commander from Legends have you thought about building a deck around? Let's discuss in the comments below!