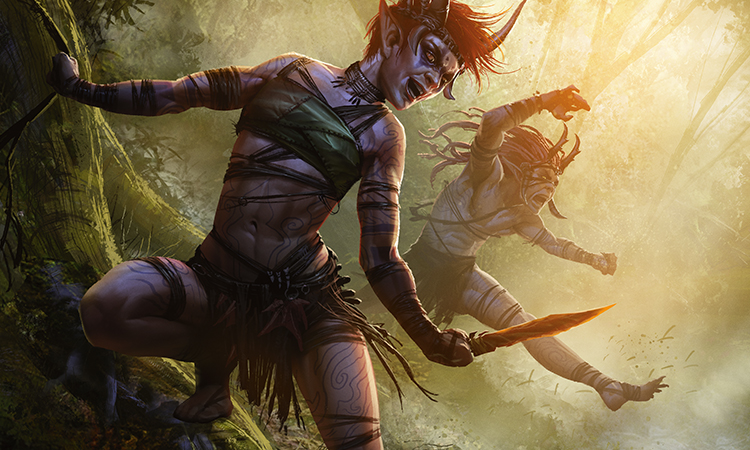 Hello friends and Elven members of the Mul Daya tribe, welcome back to EDHREC and our continuing biweekly column, Non-Basically Speaking, the series that strives to identify non-basic lands that should be considered valuable staples or hidden gems based on their visibility on EDHREC.

Today we're working on a deck that wants to crank up the heat on the land-per-turn meter and flood the battlefield with overcrowded real estate. While zoning our lots for EDH play, we also want to take advantage of landfall abilities that trigger every time we put a land into play. While Omnath, Locus of Rage may be the clear path to a competitive option for this type of strategy, I decided to take a more casual approach and add an additional thin layer of synergy sauce to the deck. First in line for this task are Elven twins, Mina and Denn, Wildborn.

The saucy part about asking Mina and Denn to lead our landfall-themed deck is the obvious fact that they allow us to play an additional land on our turn. Seasoned Commander veterans have probably seen what unchallenged explosions of land drops can do to an EDH battlefield, if left unchecked. With a ton of mana ramp and the right pieces to take advantage of this abundance of resources, casual Commander decks should be able to hold their own against more competitive deck builds.

With a landfall theme for Mina and Denn, we can open up a broad spectrum of triggered effects with the announcement of every land drop. Rampaging Baloths (66% of Decks) and Omnath, Locus of Rage (74% of Decks) provide rapid growth to our token army while our card draw resources can be squeezed out of Seer's Sundial and Tireless Tracker. Our deck build ensures that there will never be a dull moment as we cruise through our main phases. Even when we have absolutely nothing to do on our turn, instead of "Land for Turn, go..." we will at least have "Land for turn, trigger, trigger." followed up with "Second land for turn, trigger, trigger, go." Taking our land drops from a snap to an impressive snap, crackle and pop of triggered effects, will be entertaining to say the least.

Before we continue, I would be remiss not to mention what the twin brother Denn brings to the table. By returning a land to our hand and paying a red and a green mana, we can give target creature trample until end of turn. Setting us back a land drop and paying two mana seems a bit steep to make sure our Rubblehulk (45% of Decks) can crash through enemy lines but let's not forget we get double land drops with Mina and Denn, Wildborn. We could easily replay the land we just picked up and put it back on the battlefield for another round of interactive triggered abilities. With the molten core of our Mina and Denn landfall deck thematically in place, let's amplify our effects with a third level of heat, non-basically speaking!

I have to admit, I really had a great time in our last non-basically speaking article when we built around Iron Maiden in our Hanna, Ship's Navigator EDH deck. I think we can achieve similar results in Mina and Denn by including Valakut, the Molten Pinnacle (29% of Decks) as one of our deck's main focus points, or at least a secondary or tertiary strategy. My only previous experience with Valakut was in mono-red, but I have always felt that if we could add green to the mixture then we could really stir up the hot coals of value.

Valakut gives us access to a Lightning Bolt whenever we put a Mountain onto the battlefield. However, the volcano is dormant until we have at least five other mountains in play. With our basic lands split between Forests and Mountains, there could be games where Valakut is never active. So how can we increase our consistency of obtaining an active Valakut during kitchen table play? For starters, we want to ensure all four of our dual lands are included and ready to go. Taiga, Stomping Ground, Cinder Glade and Sheltered Thicket are already valued commodities for mana fixing a Gruul stack, but they are also endowed with the Mountain subtype which is what the Molten Pinnacle needs in preparation for eruption.

Even with our steady supply of basic Mountains and our four dual lands, meeting the requirements to activate our molten volcano is still going to be a fairly difficult in-game achievement to unlock. For this reason we can include Prismatic Omen to make sure that Valakut, the Molten Pinnacle sees every land we play as a Mountain. With the Omen and Valakut in place, we can start electrocuting targets with every land drop we make. Bolt, Bolt every turn. Booyah!

Wow, we sure are putting a ton of faith in being able to get Valakut, the Molten Pinnacle online every game. How exactly are we going to make that happen in a 100 card EDH deck? Lucky for us, green does have a few real estate tutors that allow us to search out any land in our deck and put it directly into play. We need to look no further than the Top Cards on Mina and Denn's EDHREC page to find an all-star world beater in Ulvenwald Hydra (41% of Decks). Not only does this monster allow us to tutor for any land in our deck and put it into play, but it also has power and toughness equal to the number of lands we control. This is gonna be a chunky bulldozer in a deck designed to dump a ton of lands onto our playmat. If only it had trample. Oh yeah! Mina and Denn, Wildborn has that covered!

A few other key pieces that will get Valakut on the battlefield are Tempt with Discovery, the instant speed Crop Rotation, and, putting it into our hand is one of my personal favorites, Realm Seekers.

We definitely need to deploy an above average amount of fetch lands in our Gruul theme deck so that we can further exploit landfall triggers. Evolving Wilds (61% of Decks), Terramorphic Expanse (47% of Decks), and Wooded Foothills (34% of Decks) are highly recommended on EDHREC for Mina and Denn, but we will also find decent value by including Warped Landscape among the 40 lands in our deck. Warped Landscape does not show up on EDHREC for our elven duo, but can be a fantastic budget addition that fits what we are trying to do.

Continuing on with our evil plan, our fetch cycle would not be complete without Blighted Woodland (40% of Decks) and Myriad Landscape (23% of Decks). Stating the obvious, we will get landfall triggers from putting the fetch land onto the battlefield and an additional trigger, trigger when we get the two lands brought into play by Blighted Woodland or Myriad Landscape. Ponder this for a moment. If we use either one of these double-fetchy thingamajigs to get two mountains with an active Valakut in play we will be able to double-bolt a thing or two. Toss an Akoum Hellkite (36% of Decks) on the board with Valakut and a fetchland and we're slingin' electric shocks all over the battlefield!

Fetch lands can create some absolute bonkers situations with our conglomeration of landfall effects. In addition to Valakut, we could get mass token production from Omnath, Locus of Rage (74% of decks), unleash a monstrous force with Oran-Rief Hydra (40% of Decks) or soak up the card draw if we have Nissa, Vital Force's (53% of Decks) emblem in play. With so many fetch lands hitting the graveyard, even Titania, Protector of Argoth can get in on the action and send some 5/3 elementals to fight for our cause.

We can further exploit Mina and Denn's ability by generating repeated value from lands that have enters-the-battlefield (ETB) abilities. For essentially two mana we can scry 1 with Temple of Abandon (45% of Decks), get a plant token with Khalni Garden (12% of Decks), or continue a game of hide and seek with Mosswort Bridge (29% of Decks). While these are all fantastic options to pair with our commander twins, let's take a look at a few more possibilities that you will not find on Mina and Denn's EDHREC page.

With our playmat swelling with lands it's time to pound some life totals with Ulvenwald Hydra. We should be able to apply trample and be a force to be reckoned with, unless our opponents have a pesky deathtouch creature like Acidic Slime in our way. In this situation we can use Smoldering Spires to prevent a creature from blocking and continue smashing in for damage.

Moving on, let's look at generating some value with Fertile Thicket. When this non-basic land comes into play we get to look at the top five cards of our library and put one basic land back on top and the other four cards on the bottom, or put all five cards on the bottom of our library. In the early game the Thicket can help us find a basic forest or mountain if we are struggling to balance our land resources. In the mid to late game we can use it to set up a basic land for Courser of Kruphix (51% of Decks) to rip off the top or to get the gunk out of the way that was previously revealed to us by Sylvan Library (16% of Decks).

With so many utility non-basic lands in our deck, why not include Vesuva so we have the ability to copy one of our lands for more shenanigans? Vesuva allows us to look beyond our own resources to copy any land on the battlefield should the opportunity call for it. Maybe one of our opponents played a Bojuka Bog earlier in the game. We could use Vesuva to copy the Bojuka Bog and use our commander's second ability to return Vesuva to our hand and put it back on the battlefield to exile another graveyard.

It is quite evident that we have included an unhealthy amount of lands that enter the battlefield tapped. To counteract this setback we can include Lotus Cobra (24% of Decks) whose landfall ability gets us one mana of any color, or Amulet of Vigor (10% of Decks) which allows us to untap any permanent that enters the battlefield sideways.

That's all I have for you today, my EDHREC friends! What do you think of our landfall deck? Did I miss any non-basic lands that would add extra utility to our deck? Would you include off-color fetchlands for increased value? What would you add to this decklist to make it better? Let's discuss in the comments below!