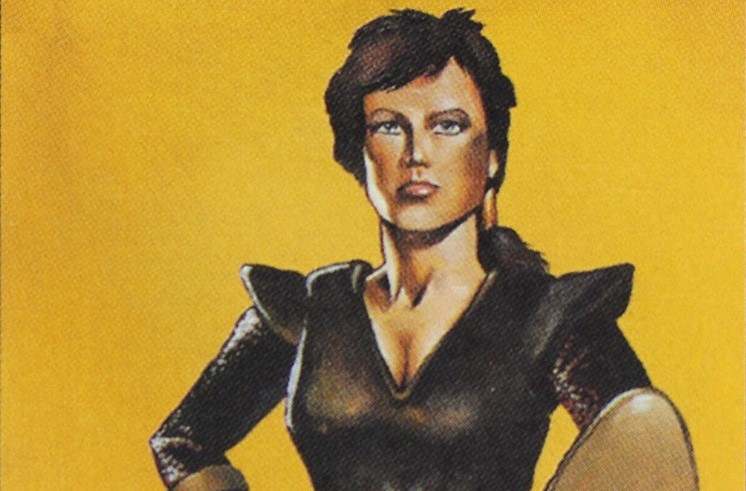 This installment is a special one because 1) it's April 1st, which means April Fools' are in order and we can feel free to throw out the rulebook and joke a bit on this one. Which brings me to point 2) this installment focuses on arguably one of the most misunderstood and underappreciated keywords: Banding. Often relegated to an antiquated footnote in the Magic: the Gathering canon, Banding is often characterized (sometimes in a meme manner) as one of the more (most?) complicated keywords in all of Magic: the Gathering. As we'll see, it isn't really evasion at all, but I've been requested numerous times to discuss it (as if it were), so here we are.

First introduced in Alpha, Banding modifies how combat damage is assigned so that the player in control of the 'band' gets to choose where damage goes. The text of notorious 702.21 rule of Banding, in part, is included below:

Though complicated in how it plays, the design was fairly simple: predominately designed for white (the color of amassing troops), it was a means for lots of little troops (e.g. Benalish Hero, Kjeldoran Warrior) to 'band together' to face off against bigger threats (e.g. Craw Wurm).

Since Fifth Edition (1997), Banding has sat pretty squarely at a 9-10 on the Storm Scale, meaning it won't be returning outside of a 'major miracle.' For more info, feel free to check out Mark Rosewater's (MaRo) Drive to Work podcast episode 179, where devotes a whole half-an-hour to explaining Banding and its associated issues.

Now you may be thinking: I have no idea how Banding works. That's OK — Don't abandon hope. In true Banding fashion, we'll tackle this together!

Putting the Band(ing) Back Together

If you want to learn more about how Banding works, be sure to check out Card Kingdom's very own video tutorial, this Judge's Corner video explanation, or check out the Commander format's forge-master Sheldon Mennery and his exemplary explanation. There's also this video about Banding from the Tolarian Community College that just makes me smile. Otherwise, I'll do a simple explanation below. 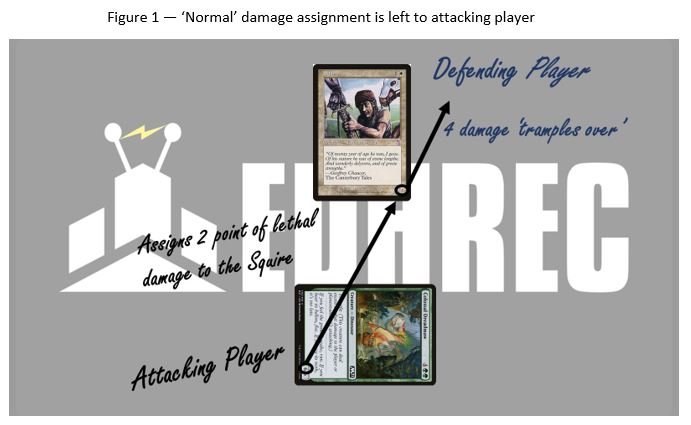 Now let's change this up a bit. Let's assume a similar scenario is occurring, with the only difference being that the defending player now also has a Savannah Lions, Kjeldoran Warrior, and Elite Vanguard as as eligible blockers. The defending player chooses to declare all creatures as blockers together as a band. The player in charge of the Colossal Dreadmaw would normally be in control of how damage is assigned, but Banding alters that and instead puts the controller of the band (lets call them the 'Band Manager') in charge. The Band Manager can then reassign the damage as they chose, say, to dogpile all the damage onto the Squire so that the rest of the team survives (Figure 2). Since Banding modifies damage assignment, you even get to control the damage that would otherwise be excessive (i.e. Trample) so you can just put all the damage onto the Squire, even if normally you couldn't since it would die after 2! 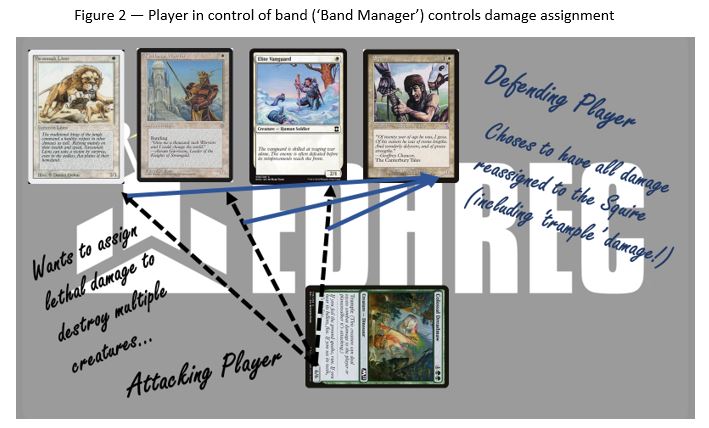 Asides from saving key blockers, Banding also works for attackers as well, which can come in handy. If we flip the previous scenario and have Kjeldoran Warrior and Darksteel Myr declared as attackers and in a band, and Colossal Dreadmaw declared as a blocker, the 'Band Manager' (in this case, the attacking player) gets to assign how the defending player's damage is dealt to the attacking creatures. Once again, we can reroute all damage from the Colossal Dreadmaw over to the Darksteel Myr allowing our Kjeldoran Warrior to survive! 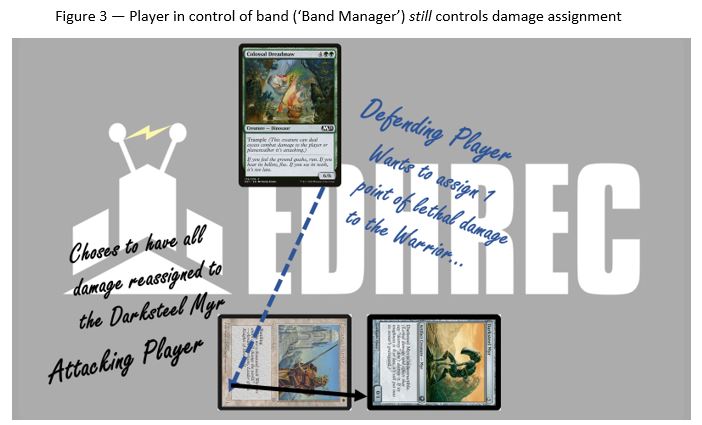 In some respects, you can almost think of Banding more as a pseudo 'Totem Armor' effect rather than evasion. It mucks up damage assignment by putting the band manager in the driver's seat, allowing them to distribute damage among multiple creatures or pile all the damage onto one so the rest survive. 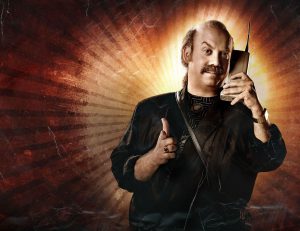 Before we move on, here's some quick notes on how to manage your band:

Despite being the keyword with all the hullabaloo, there are less than 40 Commander-legal cards that actually have or grant Banding. Notably, there is a cycle of lands that grant Bands with... to the color-specific legend of that land typing, which works similar to Banding. Finally, there's Master of the Hunt who creates Wolves of the Hunt tokens that have Band With other Wolves of the Hunt.


As for our color distribution, we see Banding is found predominately in white (again, the color of amassing troops), followed by colorless. And that little red inclusion there? That's none other than the (in)famous Nalathni Dragon. 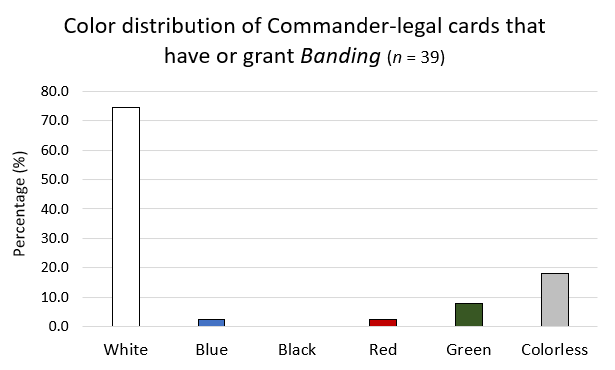 When we look at the data of Banding representation, the trend is pretty clear: it's just not that widely run. Soraya the Falconer sees the most play (helms 49 decks, included in 165 decks). After that, we see Baton of Morale, showing up in 140 decks, but funnily enough, its 'high' inclusion rate (for Banding) is actually found in Horobi, Death's Wail decks (64 decks, 28.83% of Horobi decks). Clearly, it's not used there for its Banding, it's used as a literal baton to cudgel creatures to death.

Even if we sum all the number of decks that include a card with Banding, assuming no other inclusions of cards with Banding (which, obviously, is foolish, but bear with me), we get a maximum ceiling of 1,641 decks. Considering most decks that include a card with Banding also include other cards with Banding, the more realistic deck number is probably much less. Some cards with Banding have higher inclusion rates but are likely for tribal purposes (e.g., Dire Wolves, Teremko Griffin, Mesa Pegasus). The majority of your standard Banding creatures show up together in approximately ~30 decks, meaning there are likely less than 50 or so decks out there scraped by EDHREC that actually emphasize Banding as a subtheme rather than just include a one-off card.

All this goes to say that Banding lives up to its reputation (at least in Commander) as likely being an underappreciated, under-supported, and misunderstood mechanic. Consider the Banding hosers of Shelkin Brownie and Tolaria — the only cards that specifically remove Banding and/or Bands with — see play in only 4 and 124 decks, respectively. This goes to show that people aren't frantically searching to counteract the terrifying potential of Banding in a given game.

The good news? If you lean into Banding, you will be one of the 6.4e-5 decks to do so, and thus will likely be the only Band Manager in a your area/playgroup! Like General Jarkeld, you'll be making the combat damage decisions, with just enough accompanying misunderstanding on behalf of your opponents that they'll likely scratch their heads and just decide to avoid dealing with attacking or blocking you altogether. Now that's an evasive maneuver.

Now, remembering back to the point of this whole series, is Banding evasive? Absolutely not. In fact, it mitigates any form of evasion to the least-common denominator.

Say you declare Serra Angel and Kjeldoran Warrior together in a band, and the defending player only has a Llanowar Elves as an eligible blocker. You'd think that since Serra Angel has flying the band would have flying, right? She's got big wings — surely she can pick up our Kjeldoran Warrior and fly over those pesky pointy-ears?

If one member of the band is blocked, so is the entire band, no matter the evasive keywords they may hold. Since the Llanowar Elves can block Kjeldoran Warrior, then the band it formed with Serra Angel also is eligible, so the Angel becomes blocked as well.

Which brings us to the beauty of Banding. Asides from being able to control and distribute combat damage in our favor — something strong in its own right! — we can lean into creatures that actually want to be blocked to trigger some sort of effect. In essence, we go for the opposite of evasive maneuvers: we're looking to dogpile attackers into intentionally being blocked!

Let's Rubber-Band it All Together...

With our color distribution above, leaning into white seems a priority. Given green's ability to pile on Lure effects and blue's suite of cards that want to be blocked (think Tolarian Entrancer!) Bant seems like a great direction. Since we're already mucking up combat damage assignment and can distribute damage across multiple bodies, why not lean into it?

Arcades the Strategist not only gives us the colors we want, but additionally gives us a form of card advantage and rewards us for playing creatures that happen to synergize well with Banding, like Fog Bank, Wall of Tears, Guard Gomazoa, or Wall of Hope. Blocking in a band with any of these guys will ensure we won't be taking much, if any, damage.

On offense, we want to ensure that our attacks are always in our favor. Asides from our potential to rearrange damage more favorably with Banding, we can lean into cards like Dolmen Gate, Stonehoof Chieftain, and Cunning Evasion to attack as needed without much recompense.

Cunning Evasion is a pet card of mine, and I just think it has neat utility outside of your typical Ninjas.deck. In fact, if we attack with an un-banded Thicket Basilisk or Cockatrice and don't care for how our opponents are trying to block, we can bounce our creature with Cunning Evasion. However, their triggers will still have been put on the stack before damage (during Declare Blockers step), which means our creature gets out while all theirs still die at end of combat! Plus, aside from the comical thought of Walls being cunning and evasive, bouncing defenders to our hand isn't the worst thing, as we can re-cast them to get the draw engine going again with Arcades, the Strategist.

Putting it all together, and our rag-tag band of non-evasive Walls, Basilisks, Wolves, and Insects looks like:

It may not have as much oomph as other Arcades, the Strategist lists, or many combat-centric decks for that matter. But with Banding, you're sure to cause a few head scratches. Plus, you get to play with a copy of the rules document at the ready (bookmark that 702.21). What's more April Fools' than that?

'Banding Should be Banned'

That concludes our non-evasive dive into Magic's mechanic many love to hate. Huge shoutout to Joseph Megill, for all his help, insight, and feedback on this article and the Banding list above. If you haven't checked out his own Banding list Making the Beatles, which won the inaugural Chopped-style deckbrewer's competition and inspired this very article, please do so!

And let us know: what's your Banding experience been? Does it give you a headache, or do you think it's been unjustly represented? Do you run Banding in any lists? Were you pranked today? Sound off in the comments below!