Paradigm Shift - How Your Commander's Mana Value Alters Your Curve 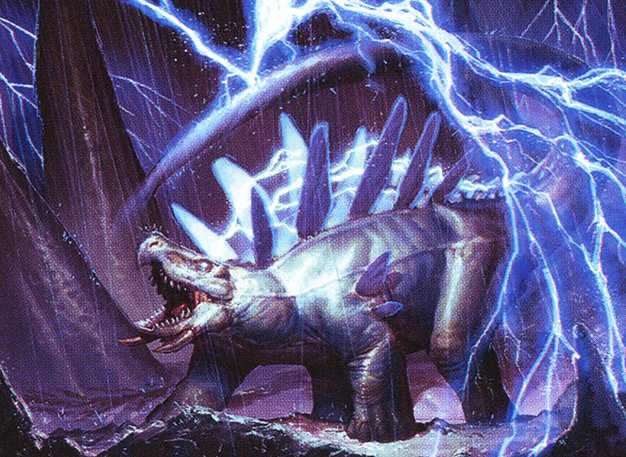 Commander differs from most other Constructed formats in that you always start the game with at least one card that you know you will have access to. Your commander dictates almost everything about the 99 cards you put around it, and so it stands to reason that it would also shape your mana curve - that is, the casting costs of each other card in your deck. But how exactly does this influence manifest itself?

One theory comes from, among other places, a recent episode of The Command Zone. Episode #453, "Advanced Deckbuilding: Mastering Your Mana Curve," is all about factors that brewers should account for when crafting their deck's curve.

Hosts Josh and Jimmy advise considering the mana value of your commander when building your curve. Specifically, you should run fewer cards at your commander's mana value than you otherwise might. Their theory makes sense: you know that your commander will be available to play on a specific turn (given you've hit your land drops/ramp), so don't run other cards that you would also play on that turn.

First, consider this "average" mana curve, built by agglomerating a large sample of decks on EDHREC: 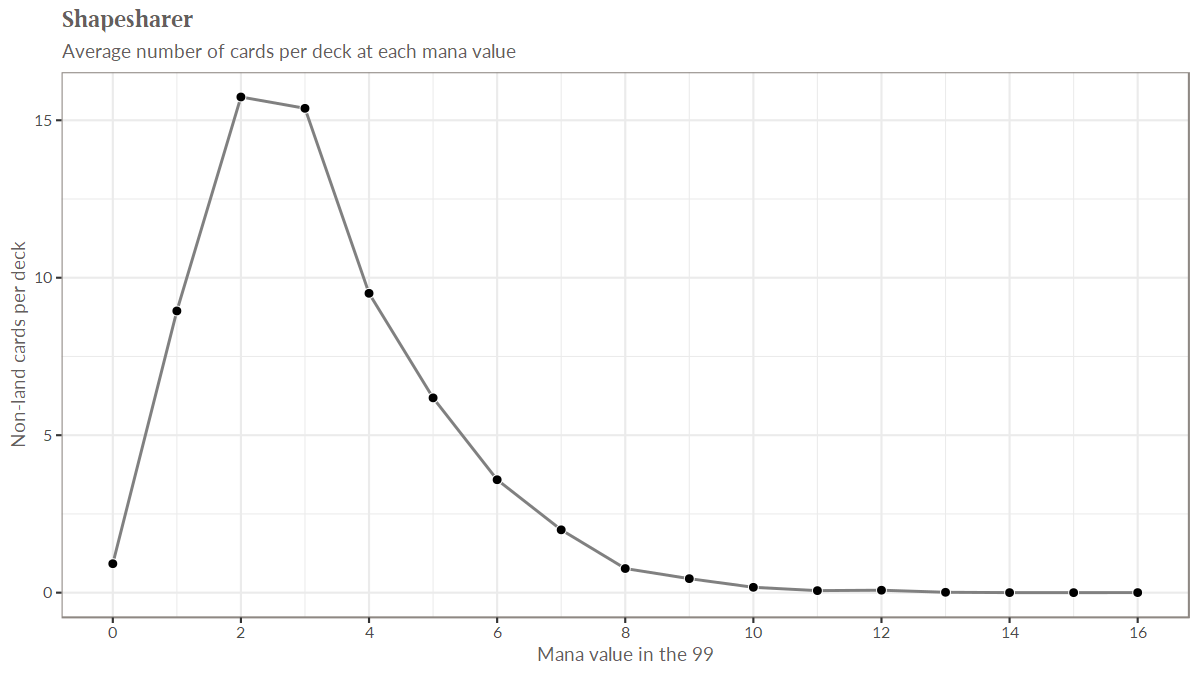 This excludes all lands, and it suggests that the modal mana value across all decks is 2. There are 15.7 2-mana-value cards per deck, and 15.4 3-mana-value cards. From this peak, frequencies drop off in both directions, tailing off at the high end -- the average deck has about 1.5 cards with mana value 8 or higher.

If deckbuilders, broadly speaking, adhere to The Command Zone's heuristic, we should expect decks with commanders of mana value x to deviate from that global curve, specifically by running fewer cards at mana value x.

Looking, for example, at all of the 4-mana-value commanders pooled together, I find that there are an average of 9.7 4-MV cards, which is actually slightly higher than the 9.5 cards/deck in the global curve above. This is contrary to our Command Zone expectation! What do all of the deviations look like, at each mana value, pooled across all commanders at a given mana value? 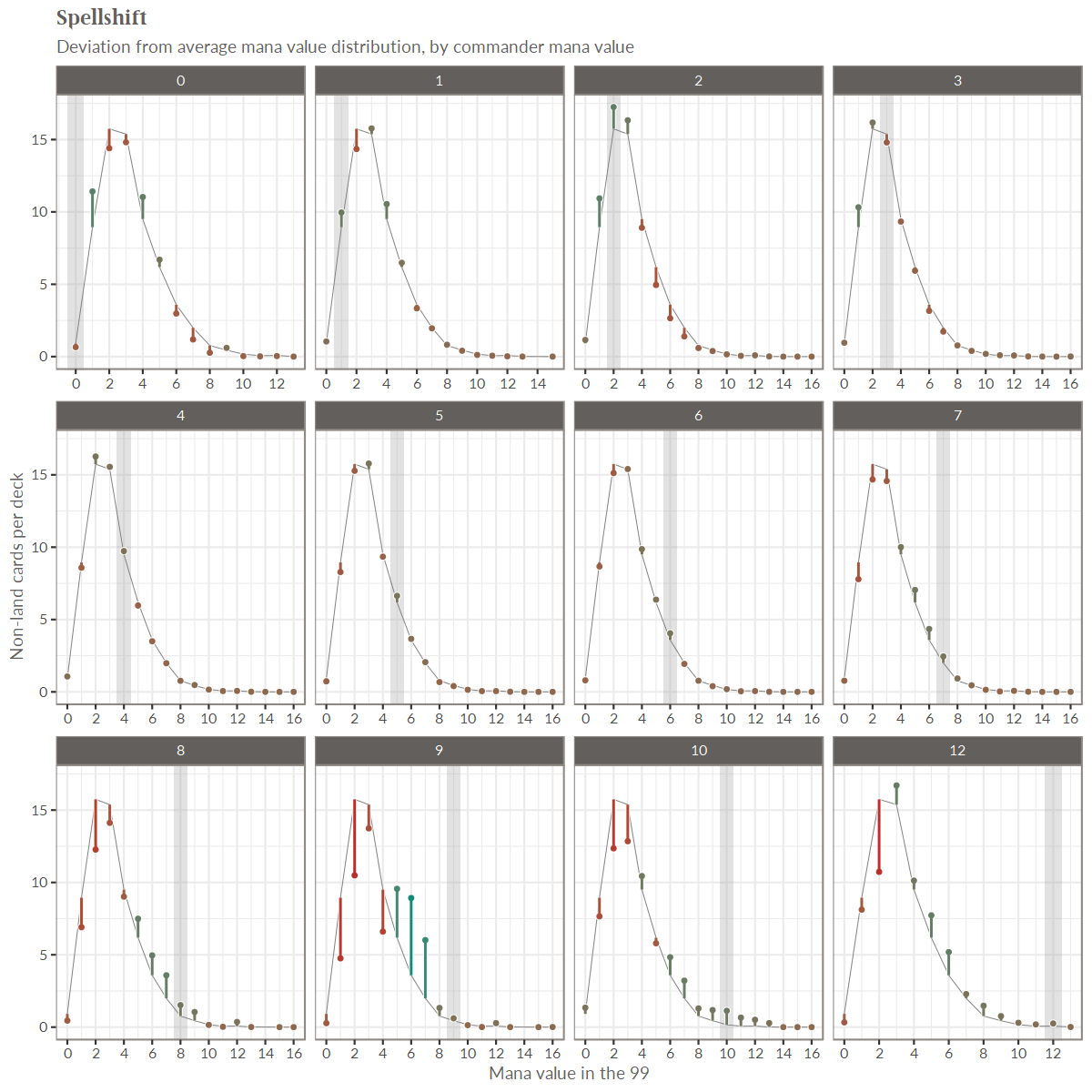 You're probably going to want to click on this one to see it larger.

What is this graph telling us? Well, each panel summarizes the curve of all commanders with the mana value in the panel's title. The thin line, common to all twelve panels, reproduces the "global curve" shown in the first plot we looked at. The little line segments each end with a dot; that dot represents the actual mana curve of the commander subset, meaning that the length of the line segment reflects how much deviation there is from the global mode.

With all of that cleared up, what can we take away from this? The first thing that stands out is that high-MV commanders seem to run a disproportionately large number of other high-MV cards (they're red/under the global curve on the left/low side and green/above the curve on the right/high side). This is almost certainly because they are built to ramp up to cast their commander early and thus have mana available to cast other expensive spells.

The lower end of the commander-MV spectrum is more interesting, in that it really defies Josh and Jimmy's advice. In almost every case, x-mana-value commanders actually run more x-mana-value spells than expected, with the exception of the 3-MV commanders. I could probably come up with some post-hoc theory that explains all of this, but I'll leave that as an exercise to the reader (send me your best theories here, or in the comments below).

Does this mean that the folks posting online decklists are doing something wrong? Maybe, but we can't tell that from the available data. Jimmy and Josh certainly know a lot about building winning decks, but (a) we don't have game outcome data to weigh in on whether their strategy really does pay off, and (b) many EDH players aren't prioritizing winning as their only objective.

All I feel confident saying, after seeing this data, is that high-mana-value commander decks look different from their low- and moderate-mana-value counterparts, but perhaps this sparks some ideas for how to better understand and evaluate the connection between commander MV and that of the 99.

Let me hear them! Do you agree with The Command Zone's advice? How do you build your curve? Do you have other ideas for how to wrangle this data to find answers? I'd love to hear what you think, and if you aren’t already, please follow me on Twitter!