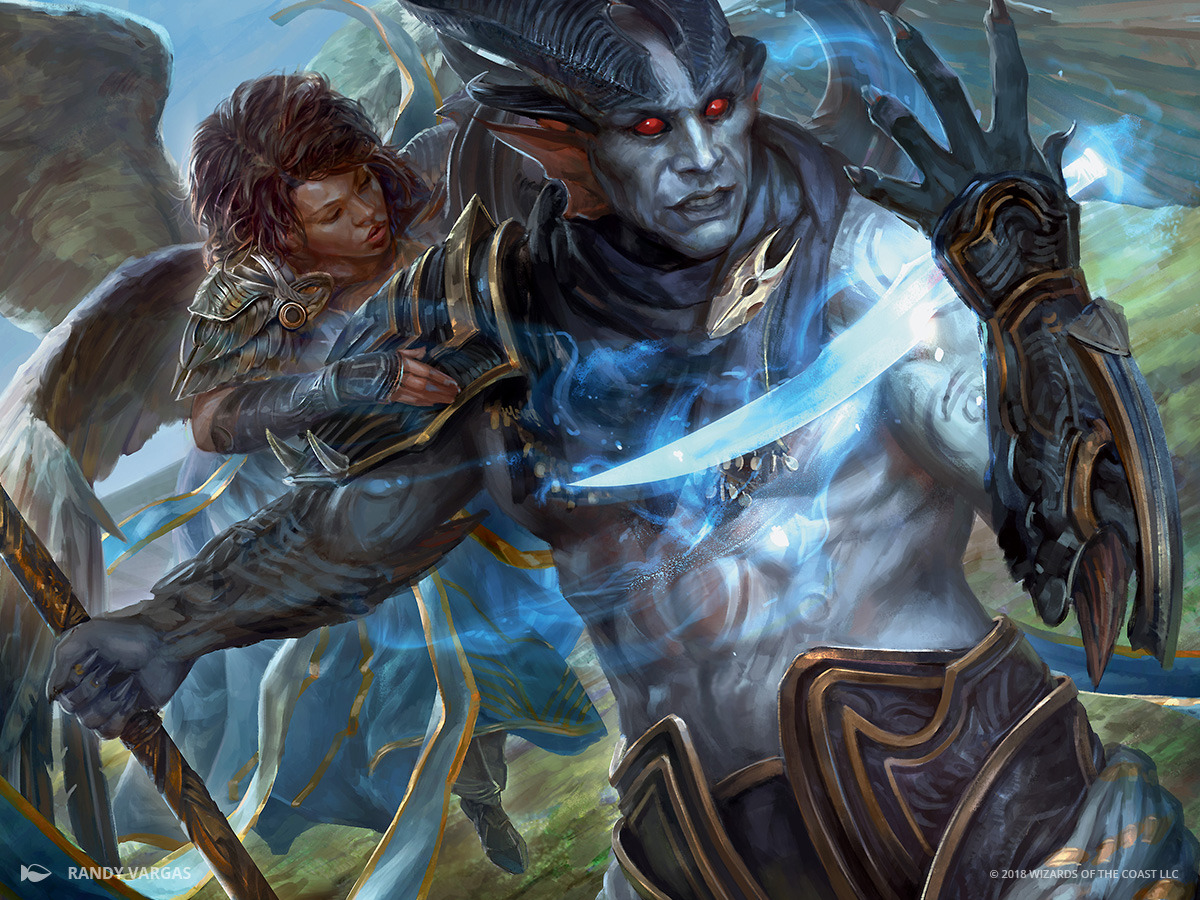 Hey, there's a new set with the partner mechanic! That means I can dust off this article series and talk some more about partners in Commander decks. I'm not talking about how to play Battlebond, or Two-Headed Giant, or drafting, or any of that, just looking at these cards and how they stand up in the EDH format.

Some fans of contemporary adult fantasy television have compared these two blond siblings with certain characters of the Lannister name. Then again, there used to be more than one blond Targaryen sibling running around, so that's another possibility. Personally, I picture these two entering the battlefield with a sassy alternating rhyme right before they abduct all the local species of Pokemon and you have to spend the rest of the game chasing them around to rescue the critters and learn the value of friendship. Just me? Not anymore! Ha!

Anyway, Will's first ability is akin to a temporary Deep Freeze or Polymorphist's Jest, which helps defend himself against scary opponent creatures. Rowan's first ability is the opposite of that, encouraging the scary creatures to charge into the fray. If she survives the onslaught, her second ability might kill off some of the attackers. She will need some protection to last long enough to use that second ability, so maybe try to cast Will first.

Will's second ability draws two cards and makes many card types cheaper to cast until your next turn, which feels generically Jace-like. If they ever reach their ultimate, then a target player (probably yourself) gets to do certain things twice as much. It seems that Will is the better card of the two, but we're comparing a blue card to a red card so that is not entirely unexpected.

Coin flips! Those are fun, right? Right? Anyone who ever wanted to make a coin-flip-tribal deck now has something relevant to put in the command zone. However, like the previous set's buy-a-box promo card commander(s) Firesong and Sunspeaker, there are a very limited number of cards that specifically work to the strengths of the commander, so these decks will likely not see as much diversity in card selection as other commanders. In other words, there aren't many different ways to build this deck.

For what it's worth, Frenetic Efreet lets you do naughty things by putting an arbitrarily large number of coin flip triggers on the stack, which Zndrsplt could then use to enable Laboratory Maniac or Okaun could use to get a couple hundred power and toughness. Hopefully, you already own a copy of Krark's Thumb, because the price of that card just sextupled when these two were revealed.

Pir is not just a walking Hardened Scales. Effectively, his ability is almost equivalent to Atraxa, Praetors' Voice's proliferate ability. It works on any type of permanent, not just +1/+1 counters on creatures. It works on lands like Vivid Grove, odd enchantments like As Foretold, and all those artifacts that use charge counters. It works when you put a planeswalker on the field to get an additional starting loyalty point and also when that planeswalker uses a plus ability to gain yet another extra point. It's not an optional ability, so your enchantments get an extra cumulative upkeep counter and an opponent's Hapatra, Vizier of Poisons puts an extra -1/-1 counter on your stuff, which is probably undesirable so maybe try not to do so much of that.

Toothy is a better version of Chasm Skulker, which is already pretty good. The three Top Commanders that use Chasm Skulker are Ezuri, Claw of Progress, Atraxa, Praetors' Voice, and Marchesa, the Black Rose. In the number six slot is The Locust God. Any of those commanders would love to add Toothy by himself in their 99. Ezuri and Atraxa have the colors to run Pir as well, and they probably will. Buckle up for even more Atraxa deck updates to be uploaded to the EDHREC database over the next month because of these two characters.

Virtus is a walking Quietus Spike. Gorm is a pseudo-Lure with large toughness. This dynamic is cute, but it should be used with additional support that takes advantage of someone losing large amounts of life, such as Exquisite Blood. If you can play Wound Reflection or the new Archfiend of Despair to double up on the life loss, then Virtus is no longer cute but an actual killing threat. Note that Virtus's life loss effect does not count as commander damage.

Gorm's high ratio of toughness to mana cost makes him appealing for Doran, the Siege Tower decks, and since Doran does like to win by doing strange things with combat damage, Gorm's combat effect will still be relevant in that type of deck.

For three mana, Sylvia gives all your dragons double strike, which is efficient enough to secure a place in many dragon tribal decks, with or without Khorvath.

For six mana, Khorvath gives all your knights flying and haste. This could hypothetically show up in a knight tribal deck, but that deck won't have much use for Sylvia. For one more mana, Akroma's Memorial gives flying and haste and more to all your creatures, not just knights. Given the fact that there are currently more than ten times as many dragon tribal decks as there are knight tribal decks, there will likely be many a lonely unaccompanied Khorvath sitting unplayed in bulk boxes around the world.

Krav and Regna are a loving star-crossed couple who are also quite clearly a team of serial killers. This isn't a sappy movie with Mila and Ashton. It's more like later seasons of "Dexter". She lures the poor saps in. He takes them out. Profit!

And a fine profit it is. Krav's ability is good enough that I'm reevaluating the demon roster for my Shadowborn Apostle deck. Usually, we black mages have to pay life to draw cards. Instead, Krav lets us pay in creature blood instead of our own blood, then he gets counters and we gain life. How refreshing. Mazirek, Kraul Death Priest, for example, could certainly use a sacrifice outlet with extra value.

Regna is comparable to Elspeth, Sun's Champion at the same converted mana cost. Repeatably creating multiple token creatures is the main reason to play Elspeth, and at currently over 17,000 decks, she is apparently highly respected in that role. Assuming that a white deck with Regna in it also uses frequent life gain, which is a fairly safe assumption, the tokens will start piling up. Note that her ability works on each end step, not just your own, so if you can gain life on other players' turns then you get even more token fools to throw into the wood chipper. Ayli, Eternal Pilgrim, for example, might look at using Regna without Krav since she has her own sacrifice game going on. But then she'll probably put Krav in her deck too because his ability is just that good.

None of the rest of these can be in your command zone, but maybe some of them might be useful...

She throws the frisbee and it does 2 damage, then the pupper brings it back so she can do it again. That's adorable. However, the base mana cost of both of these creatures seems a bit high for the effect. There are much more effective ways to use 5 or more mana.

Individually, the Retriever will probably see some play in decks where a commander in blue has an ability that requires tapping, and the deck already runs Paradox Engine or wants a budget alternative. For example: Merieke Ri Berit, Phenax, God of Deception, or Kydele, Chosen of Kruphix, just to name a few.

Like many cards in the Simic guild, these Weavers don't really synergize with each other aside from just doing the simple things that every deck wants to do, like draw more cards and get more mana. Paying seven mana to draw two cards is a pretty steep cost compared to other card draw alternatives in blue.

Tapping Ley Weaver to untap two lands, on the other hand, is potentially fantastic if you have the right lands. Even if you aren't racking up the mana with Nykthos, Shrine to Nyx or Cabal Coffers, you can get an extra use out of a Maze of Ith. In fact, if she is attacking, then you can use Maze of Ith immediately to untap her, tap her again to untap the Maze and another land, tap the Maze again to untap her again, repeat that loop to untap yet another land and keep repeating... Hey, you just instantly untapped all your lands during combat. Seems good.

These next cards might be considered useful, in the hypothetical case where a five-color commander existed that worked with Warrior tribal... What's that, you say? Such a commander now exists? Well then, let's carry on...

In the case of Soulblade Corrupter at 5 mana: for one less generic mana, Mer-Ek Nightblade has a better version of the deathtouch granting ability that also works when your counter-bearing creatures are blocking. He's not a warrior though. Is the specific creature type worth the extra mana? For a warrior tribal deck, probably yes.

Soulblade Renewer is a less impressive use of 5 mana. It does synergize directly with the Corrupter's ability and it can tutor for the Corrupter if you really need some deathtouch. However, if its best feature is being able to get another specific card, then there are probably better things to do and cheaper ways to do them.

Compared to the rest of the partners, this red/white pair is aggressively costed at 3 CMC each. Proud Mentor's ability is generally useful for combat situations, and it directly helps Impetuous Protege get bigger. However, there is a rattlesnake effect here since playing one implies a tutor for the other, so opponents may be reluctant to play high power creatures. Then again, it tends to be a good thing for us if our opponents don't play that kind of stuff, so rattlesnake away.

Blaring Recruiter can make a 1/1 warrior token for 3 CMC, which is around the usual cost for white token weenies. It does not have to tap to do it, so you can make as many warriors as you have the mana to do so. Blaring Captain gives something like a battle cry to all your warriors (see Goblin Wardriver). Both of these warriors will probably see play in the upcoming five-color warrior tribal decks. They could even both go in a Krav/Regna orzhov version of warrior tribal, if we pretend that Krav isn't going to kill them all.