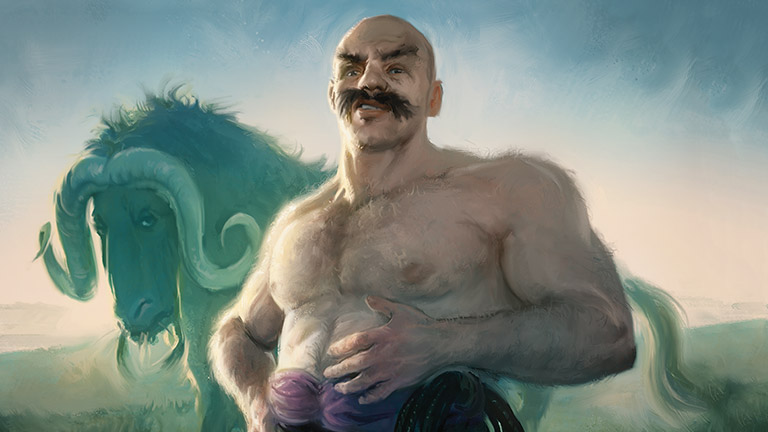 Note the flavor text on the cards Pillarfield Ox and Ondu Greathorn. "May starving fleas birth a thousand generations on your stubborn hide, cow!"

"May your horns get lodged in an Eldrazi's bony face, ornery brute!" Bruse Tarl, Boorish Herder is brash, abusive, unapologetic, and may or may not have a name that sounds like "bruise". Once per turn, or twice if you cast him and give him haste in the same turn, he can give a creature (perhaps himself) both double strike and lifelink. If you can wrangle some extra combat phases, he can do it to more creatures if he survives the earlier combats. Who would go well with such a commander? Any creature that plans on entering combat for starters.

An often overlooked feature of Bruse is that he is an Ally. Many Ally creatures have a Rally ability that compounds benefits when you play more Allies, so Ally Tribal is a viable option. With enough Rally triggers, it might even start to feel like Sliver Tribal. However, in that type of build he is probably overshadowed by General Tazri.

Since Bruse's abilities are so open ended and can benefit any other combative creature, we could go in many directions when brewing. Let's overview the possible color permutations and the resulting partner choices.

A dedicated Boros deck with Akiri, Line-Slinger is a possibility, but the artifacts required to empower Akiri makes it mainly an Akiri deck. More cards in the 98 will be devoted to augmenting her abilities instead of Bruse's.

Sidar Kondo of Jamuraa could help with a feasible Naya deck, especially when low-power unblockable infect creatures suddenly have double strike. Tana, the Bloodsower could give you twice the saprolings, if you are into that.

Ishai, Ojutai Dragonspeaker is a strong choice for winning by commander damage. Kraum, Ludevic's Opus isn't as good as Ishai for the same strategy, but he's not terrible. Ludevic, Necro-Alchemist is a noncombatant, so let's set him aside. Since I already made an Ishai/Kraum deck with Bruse in the 98 for my Ishai article, both the Ishai and Kraum approaches feel too repetitive for this series. Not bad choices, though.

Ravos, Soultender is only a 2/2 flier, but has other good abilities that benefit an army of combative creatures. That type of build might look a lot like builds for Alesha, Who Smiles At Death with creatures that get extra value from graveyard recursion, except we could add creatures with power higher than 2. Tymna the Weaver already has lifelink and is presumably a noncombatant, but can give you a miniature Necropotence if you spread the attacks. Vial Smasher the Fierce is definitely noncombatant and sits in the back waiting for you to cast a spell each turn. None of these options look great for a win by 21 commander damage.

To cover every color except black, we would have to partner with either Kydele, Chosen of Kruphix or Thrasios, Triton Hero. I think Thrasios gets the edge here, since (as a anecdotal observation) decks with Kydele as a partner seem to be mainly Kydele decks. Thrasios helps you draw the other creatures that you want Bruse to assist. However, in a sneakier meta Kydele could be used as a decoy in the command zone to make your opponents think you'll be focused on card draw instead of double tapping their face with huge creatures. Either way, you probably won't be winning by inflicting 21 commander damage.

To add both blue and black to our colors, the only option is Silas Renn, Seeker Adept. Unless you are using lots of artifacts, this definitely makes Silas a decoy. Green is the ubiquitous color for large creatures, so we would be missing out on many attractive options there. It is also the best color for trample, which is an important addition to double strike.

For this permutation, we would partner with Ikra Shidiqi, the Usurper or Reyhan, Last of the Abzan. The easy choice is Ikra, since she likes combat and is a two-card combo with Bruse's double strike and lifelink. The more challenging brew would be something based on +1/+1 counters for Reyhan, but then it becomes a Reyhan build instead of Bruse. As much as I would like Ishai, Ojutai Dragonspeaker and Kraum, Ludevic's Opus to have double strike and lifelink, we can't have either of them if both Bruse and Ikra are in the command zone.

I do want green creatures to maximize Bruse's combat abilities and Ikra is the strongest combatant among the green partners. Both of them have lifegain abilities, so cards that work with that aspect can get more value. Speaking of which...

Hey, remember last article where we talked about Ikra Shidiqi's tricks for getting extra value from lifegain? Since Bruse Tarl also grants lifelink, those tricks can still work for Bruse with or without Ikra. Felidar Sovereign and Test of Endurance are options if your meta doesn't despise sudden wins. Add a Vedalken Orrery to cast them right before your turn and the wins become even more surprising.

To take better advantage of double strike, we can search for creatures that give some benefit whenever they do combat damage. If it was a cool effect once, it's probably better if it happens twice. As a thematic choice, I'm going with a 'Legendary All-Stars' theme. Let's limit the search to legendary cards in keeping with that theme.

Gatherer search: Text: AND "deals combat damage" NOT "damage to you", Type: Legendary, Color: NOT blue

Ashling, the Extinguisher seems good at first glance, in that the defending opponent would sacrifice two creatures. However, if they had two creatures to sacrifice, why didn't either of them block Ashling? From her EDHREC page, we see several items in the Signature Cards that can make her unblockable or at least less blockable. Sword of Feast and Famine gives some protection from colors and double strike does nifty things to your mana base if you have an instant to cast during combat.

Borborygmos, while high on the mana curve, already has trample and would put two counters on all your creatures. One of those counters drops before regular combat damage. Drana, Liberator of Malakir would have a similar effect as well for only 3 converted mana cost. Seems good.

All the Primeval dragons from the Invasion and Planar Chaos sets have abilities that let you pay mana for some effect after they do combat damage to a player. This includes Darigaaz, the Igniter, Oros, the Avenger, Rith, the Awakener, and Teneb, the Harvester. Given double strike, you would have to pay the mana with each hit to get double the benefits. With Teneb, that still seems like a good bargain.

Saskia the Unyielding is an easy addition that, along with double strike, can quadruple a creature's damage. From Saskia's commander page, we can find Xenagos, God of Revels, Aurelia, the Warleader, and Gisela, Blade of Goldnight for more multipliers in legendary creature form.

A good way to fill out our All-Star team in white/black/red/green is to run a certain Advanced Filter from Saskia the Unyielding's page... Similar to the Corpse Cur trick mentioned in a previous article, Heroes' Podium is a colorless card that can go into any commander deck that is expected to be full of legendary creatures. We can apply this filter to a commander in our chosen colors and probably get applicable results, depending on how many decks for it EDHREC has scanned. In addition to appropriate creatures like Captain Sisay and Reki, the History of Kamigawa, we find useful noncreatures like Day of Destiny to pump our team and the legendary land cycle from Champions of Kamigawa including Okina, Temple to the Grandfathers and Shizo, Death's Storehouse.

Scrolling down to the Top Cards, we get Iroas, God of Victory to give our team of legendary attacking terrors menace and immunity from combat damage. Crackling Doom happens to be one of my favorites ("Each opponent sacrifices") at instant speed. Thalia, Heretic Cathar reduces the number of opponent blockers. Due to the timing, if you only have one combat phase then Odric, Lunarch Marshal won't replicate Bruse's gift of double strike and lifelink from his attack trigger, but if we already plan on having legendary creatures who tend to have keyword soup on them then Odric still might not be a bad idea. Throw in your favorite Avacyn or two.

After the Signature and Top Cards, the rest of the Creatures section is the rest of the legendary All-Stars that may have slipped our mind. We haven't even mentioned any Phyrexian Praetors yet, but here they are. Zurgo Helmsmasher with double strike and lifelink can be a bit intimidating. Who are your favorite legends? Eldrazi Titans? Tarkir Dragons? More Angels? More Theros gods? Find what you like, because it's probably here.