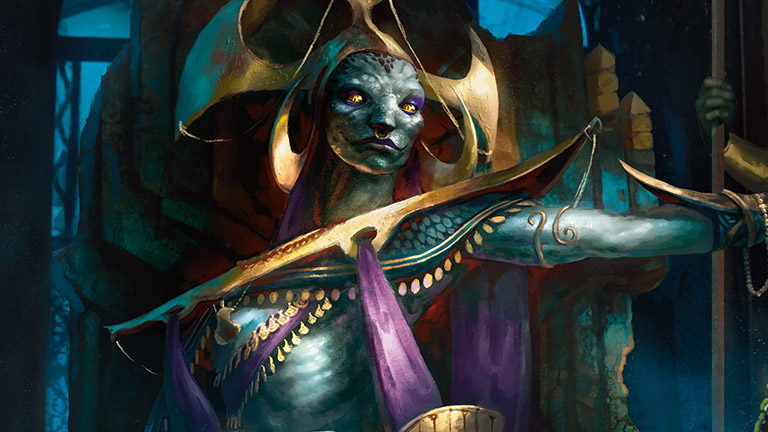 I've been looking forward to writing this article. Along with Vial Smasher the Fierce, this partner was the most immediately appealing to me. Ikra Shidiqi, the Usurper is a combat-ready commander that enjoys jumping into the fray and gives you an amazing benefit as a result. Let's look at each part of the card in turn and see what deductions can be made.

Out of the above rules text, abilities based on creature toughness is generally the least commonly seen on commanders. This means we can use it as the most constraining variable for EDHREC's data, giving us more specific results. Let's start with that.

The "Toughness > 0" constraint was added to filter out all the commanders with */* as their power and toughness, since the rules text has to explain that using the word "toughness".

Ayli, Eternal Pilgrim also has the ability to gain life based on a creature's toughness, so we could pick up some tricks to get extra value from that on Ayli's page. Sanguine Bond and Aetherflux Reservoir are in the Top Cards section, as well as Kambal, Consul of Allocation who has tricks of his own.

Doran, the Siege Tower has 744 decks total, with 204 decks since the release of the highest used Signature Card, Ikra Shidiqi, the Usurper. 81% of those decks include Ikra. That's a lot. Treefolk as a creature subtype is well suited to having toughness higher than the converted mana cost, making them more efficient for Ikra's ability. Other commanders in Doran's Signature Cards are Sapling of Colfenor, another treefolk commander in our "toughness" search results, and potential partner Sidar Kondo of Jamuraa. So one option is to take a Doran deck and put Sidar and Ikra at the top. It's almost too easy...

Trostani, Selesnya's Voice adds more lifegain cased on creature toughness, but based on the EDHREC page the focus here is more on creating lots of tokens than high-toughness creatures. Adding an Advanced Filter for Aetherflux Reservoir gives us more specific results to try to focus more on the lifegain aspect, but most cards like Felidar Sovereign and Rhox Faithmender already appeared on Ayli and Kambal's pages.

Phenax, God of Deception is one of the few commanders here that doesn't have white. Phenax can help if we want to add a creature mill theme, but that seems contrary to using those creatures for combat. The Creature section is well stocked with creatures that have toughness higher than their cmc. Unfortunately most of them have defender, so they probably won't be doing combat damage to players. Wrexial, the Risen Deep is a standout character with high toughness, strong landwalk evasion, and an ability that often plays better than it looks on paper. While you wouldn't know it from Phenax's page, the color blue is excellent in the category of unblockable creatures.

Mannichi, the Fevered Dream has a Doran-like ability relevant to Ikra's interests. If we plan to add red, perhaps with Bruse Tarl, Boorish Herder, then we might find some interesting red or colorless cards here. Equipment such as Slagwurm Armor, Belbe's Armor, and Accorder's Shield all boost creature toughness by various amounts.

Since Ikra is both combat viable and gains value from combat, one theory is that we should probably partner with someone else who has an effect on combat. This rules out other wizard and wizard-like partners, namely Kydele, Chosen of Kruphix, Thrasios, Triton Hero, and Vial Smasher the Fierce. Also, Ludevic, Necro-Alchemist, Reyhan, Last of the Abzan, and Tymna the Weaver can gain extra value from what happens during combat, but since they do not affect combat itself they may not be the strongest choice.

Bruse Tarl, Boorish Herder and Sidar Kondo of Jamuraa affect combat for your other creatures, but Ikra is too big for Sidar's help. Akiri, Line-Slinger and Silas Renn, Seeker Adept are minor beaters themselves, but the dependence on artifacts is not appealing here. Tana, the Bloodsower and Ravos, Soultender are minor beaters with some evasion. If we want to focus on Golgari graveyard shenanigans, then Ravos gets more attractive due to the added recursion. Ishai, Ojutai Dragonspeaker and Kraum, Ludevic's Opus are the major combatants, with flying and (eventually) the highest power among all the current partners. Being a large flying beater does count as "affecting combat". As the first four-color deck in this article series, Ikra is teaming up with Ishai, Ojutai Dragonspeaker. If only Ishai had red in the mana cost, then we could add a Dragonspeaker Shaman and Sarkhan, the Dragonspeaker, but who needs that guy? For thematic reasons, a few creature slots are reserved for those legendary Tarkir dragons who happen to have power not greater than their toughness. Sorry, Dragonlord Ojutai, but Ojutai, Soul of Winter will have to represent for you.

If you like a more combo playstyle, feel free to add Exquisite Blood to go with the various Sanguine Bond effects.