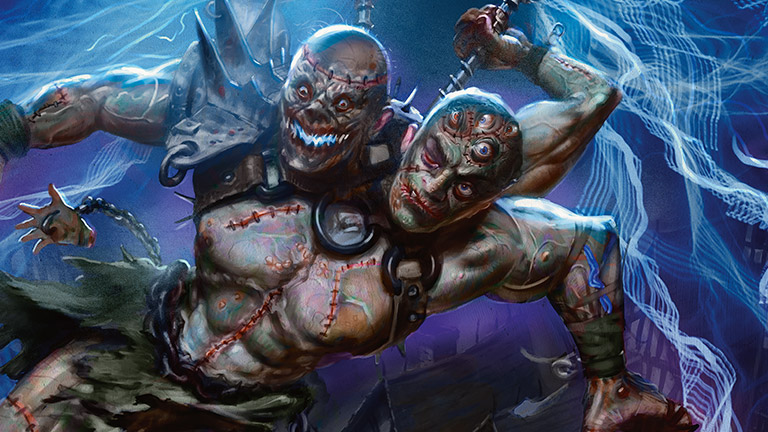 Just for fun, try going into an IKEA, buying a few things at random, then dumping all the parts in one pile and throwing away the instructions. See what you come up with, Ludevic-style.

For starters, Kraum, Ludevic's Opus is a 4/4 with flying and haste. With a healthy power increase, that has the potential to kill opponents by accumulating 21 commander damage in a reasonable time. But wait, there's more. Whenever an opponent casts his or her second spell each turn, draw a card.

One approach to make this ability trigger more often is to include global mana cost reducers that also benefit your opponents, such as Helm of Awakening, Urza's Filter, and Arcane Melee. Personally, I'm not a big proponent of doing things that benefit my opponents, but if you can handle the politics of a group hug strategy, then these cards are an option. Be aware that with this approach you might be wrecked by helping three other combo decks go off before you can cast your commander. I'm going to consider Kraum's card draw ability an occasional bonus that happens from time to time without going out of my way to help it along.

Don't forget the ability, though. You'll have to be more vigilant during opponent turns when they cast to see whether they already cast a spell that turn or not. In my previous Ludevic article, I briefly considered the idea of a theme-heavy blue/red deck with Ludevic, Necro-Alchemist as the second partner. At the time, it seemed that such a deck would focus more on Kraum than Ludevic, but after looking deeper I don't think the predicted focus holds. After all, we get more card results by searching for "Ludevic" than we do "Kraum".

If we are going deep on a theme for a particular character, we can also search the flavor text and get cards with interesting references or quotes.

If we are going along the lines of an Izzet spellslinger deck similar to Mizzix of the Izmagnus, then Rise from the Tides might be somewhat effective, comparable to Army of the Damned if the deck has the right composition of card types.

"Dear brother, it's sweet that you have chosen to share your toys with Ludevic, but I too have found some new playmates."
—Ghoulcaller Gisa

Bone to Ash is a perhaps over-costed counter and cantrip combination that could fill a hole in the mana curve for your spellslinger deck's flavorful Brain in a Jar.

"I can think of worse ways to go. On second thought, maybe not."
—Ludevic, necro-alchemist Speaking of the flavor of brains...

We could expand our options by expanding our search to include Geralf, which shifts the deck further in the direction of zombie (horror) tribal. Like Ludevic, the character Stitcher Geralf is a legendary human wizard in blue who likes making zombies out of spare parts.

There are a few search results that reference both of these wizard characters on the same card. Unfortunately, some of these are ultimately vanilla creatures without any EDH-worthy rules text, like Lupine Prototype and Seagraf Skaab. Despite the flavor, one has to be extremely committed to a theme to include vanilla creatures in an EDH deck. While Lupine Prototype is aggressively costed for a 2 mana 5/5, the rules text requires some effort or circumstance to be as good as a vanilla creature. Likewise, Ludevic's Test Subject has to do some work in order to transform into Ludevic's Abomination, which is "just" a 13/13 trampler.

"Your recent work is an inspiration. I have the utmost respect for your approach, and your craft is impeccable. At your convenience, I would be honored to collaborate on a project."
—Ludevic, letter to Geralf

The popular Rooftop Storm is used in 2128 decks, which is more decks than a lot of commanders have. Forgotten Creation is used mainly in Gisa and Geralf (365 decks), but it also sees play in 78 Niv-Mizzet, the Firemind and 47 Kydele, Chosen of Kruphix decks which each have their own ways of weaponizing that upkeep hand cycle. Stitchwing Skaab, Advanced Stitchwing, and Geralf's Masterpiece can recur themselves out of the graveyard by discarding more cards into your graveyard. As a bonus they are also flying zombie horrors, so Kraum will have some agreeable company up there. Back to the subject of zombies...

Some of the recent sets have added excellent new options for zombie tribal decks. The Commander's Brew podcast had a post-Amonkhet episode about Esper Zombies using Ravos, Soultender and Silas Renn, Seeker Adept to add Amonkhet's white zombies to the traditional blue/black zombie tribal mix. Even though he is a human cleric, Ravos does seem fitting for a zombie deck due to the act of dragging a creature back from the graveyard on your upkeep. Silas Renn... not so much.

Kraum happens to be a zombie that adds blue (and red as a bonus) to Ravos/white black for the possibility of a four-color zombie tribal deck.

We can get a headstart by looking at Thraximundar (568 decks) or Lord of Tresserhorn (147 decks) for zombies in blue, red, and black. Even without any Advanced Filters, the popular approach for both of them already seems to have a zombie focus.

Let's check to see if Daxos the Returned (626 decks) could conceivably add some zombie white. We would have to tweak the filters in favor of Daxos's zombie side instead of the inherent enchantment focus. The first two zombies listed (Grim Guardian and Agent of Erebos) are also the only zombies listed and they still care about enchantments. Adding a filter to search Daxos decks that include both of those cards gives 122 deck results. We don't find many more zombies this way, but we are reminded that Anointed Procession exists. Other than Ravos, every creature and planeswalker in this deck has the word "zombie" on it somewhere. Five out the eight enchantments and half of the sorceries say "zombie". The cards that do not specifically have a "zombie" do have names or artwork that are thematic for the undead, such as Debt to the Deathless, Grave Pact, and Anointed Procession (of zombies). No really, the art has a procession of mummified zombies. It fits! We could run Nim Deathmantle to make all our zombies even more redundantly zombified, but instead this runs Unscythe, Killer of Kings to zombify everyone else's creatures in the style of Kalitas, Traitor of Ghet.

Living Death and Living End get a special mention for their interaction with Leyline of the Void. Speaking of which, I think it sure would Traumatize a lot of people if they were attacked by a horde of zombies... so that one is thematic too, right? Even if you Traumatize yourself right before the Living End counters expire and your graveyard vomits forth half your deck's zombies onto the battlefield at once? Yeah? Work with me here. Ok fine, Traumatize someone else and then target them with a Necromancer's Covenant for a dozen zombie tokens with lifelink. That's if there is no Leyline out, otherwise all the Traumatize did was vaporize half an opponent's library directly into exile, and what cruel, monstrous genius would do such a terrible thing?

Next time: Reyhan, Last of the Abzan