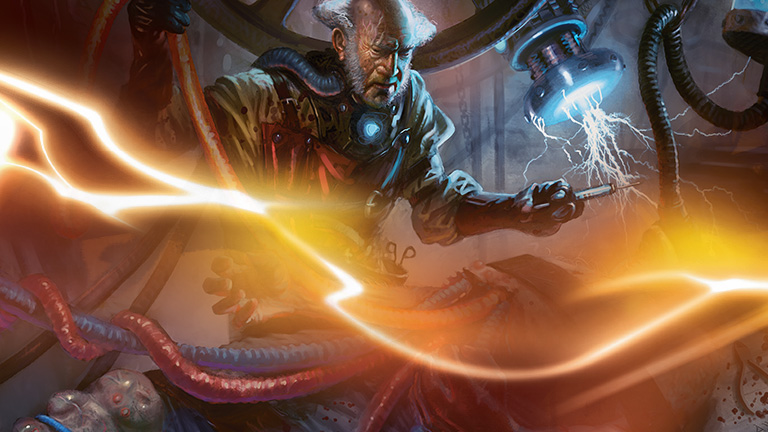 Who knew that necromancy didn't need the color black? I didn't know that. Apparently, if you add alchemy then you can raise those dead bodies Gitaxian-style, with strange mixtures and fluids and not a single ritual sacrifice to be seen. Ludevic, Necro-Alchemist is an odd character. He can potentially help any player on the board as long as someone other than you lost life. Of course, if you lose life as well as someone else then they still get the benefit. Anyone with a Phyrexian Arena gets to draw another extra card on their end step since their Arena caused them to lose life. (Note: They are not you.)

Let's try a completely different approach to brewing than the previous Partner Focus articles. I'm going to pick two cards from Ludevic's colors that I feel best support his abilities. Then we'll work backwards to determine our strategy, additional color(s), and second partner by asking EDHREC about those cards directly and checking their Top Commanders and Signature Cards sections. This article will rely less on Gatherer searches and more on EDHREC results than my previous articles.

I'm going to use a couple of my personal favorite pet cards that have the phrase "can't attack you" in the rules text. Ludevic encourages your opponents to attack each other, but I want to encourage that inclination even more.

Red: Rite of the Raging Storm Let's look first at the Top Commanders that use this card and highlight the most interesting cases.

Gahiji doesn't stop opponents from attacking you, but their creatures are more effective if they attack someone else. Using all of Gahiji's colors would lock us into partnering with Sidar Kondo of Jamuraa. That doesn't seem like the best strategic match, but maybe there are some good red/green or red/white cards on Gahiji's page if we decide to use a second partner with either white or green.

The "group hug" philosophy is strategically questionable in my opinion, since you are helping everyone else draw their win conditions and play enough lands to cast their win conditions. As with Gahiji, these colors lock us into Sidar Kondo; however, Zedruu the Greathearted is also in the results lower down the page if we want to add only white to a group hug strategy.

The monarch mechanic encourages the table to attack the monarch player. As long as you're not the monarch for the majority of the time, then theoretically you won't be the table's main target. There are monarch-related cards in every color, so we can use some no matter what colors we finally choose.

The goad ability forces an opponent's creature to attack someone other than you if able. It only appears on a handful of cards in red or blue, but Ludevic already has both of those colors so we could use them all. Note that if you only have one opponent left then goad just forces them to attack you, so don't save it until too late in the game.

If your opponents damage each other, then damage is doubled. If they damage you, you get half. It will be a tough sell to encourage your opponents to allow this situation to remain for long.

Mass punishment cards like Havoc Festival, Sulfuric Vortex, and Manabarbs would all be "helping" your opponents draw cards, but this approach is an even tougher political sell than Gisela.

Scrolling down to the Signature Cards, we have Goblin Spymaster, Kazuul, Tyrant of the Cliffs, and Orzhov Advokist. The Spymaster gives everyone some token creatures for attacking (hopefully your other opponents). Kazuul and the Advokist both guide combat in a direction away from you.

I could choose Propaganda to synergize with Ludevic's combat targeting encouragement, but Propaganda is a widely known and widely played staple. Instead, if we use a more obscure but still playable card we will get more specific and hopefully more applicable results.

Ludevic might do some work in a Nekusar build, but since Ludevic's card draw is a "may" ability, opponents could decline to draw in order to avoid the Nekusar damage. However, if Ludevic's ability becomes one-sided card draw in your favor, then that might not be such a bad thing. If we add a partner with black, then Nekusar and his associated cards could work in a certain type of Ludevic build. Though at that point we have to ask ourselves why we're not just making Nekusar the commander.

Like Gahiji, Honored One, Edric rewards your opponents for attacking each other. His page might also have some cards that benefit you when opponents draw cards.

Don't forget to consider the possible tribal synergies with your chosen partner. Three other partners share Ludevic's creature subtype of Wizard, specifically Ikra Shidiqi, the Usurper, Kydele, Chosen of Kruphix, and Thrasios, Triton Hero. We can quickly check on all the wizard tribal decks from EDHREC's Tribes page.

Note that Kynaios and Tiro and Zedruu the Greathearted appear again in these Top Commanders results as well.

Scrolling down to the Signature Cards, we have Propaganda and Cyclonic Rift, which are safe staple choices.

Looking only at the EDHREC results from the two chosen cards, let's see what each color could add to our deck.

White gives us plenty of options to make the fluffiest pillow forts with Orzhov Advokist, Ghostly Prison, Windborn Muse, Blazing Archon, Norn's Annex, and Sphere of Safety. There's also a flash fog with Selfless Squire. Benevolent Offering and Alliance of Arms can give opponents some token creatures to throw at (hopefully) each other in a style similar to Tempt with Vengeance.

Green gives us the usual land tutors, but specifically Tempt with Discovery and Collective Voyage can benefit all players to support a group hug strategy along with Rites of Flourishing. Sylvan Offering makes token creatures for you and one opponent. One possible win condition is a well-timed Treacherous Terrain as a one-sided Acidic Soil.

Black does not have much representation on these pages. Nightscape Familiar is a decent medallion. Nekusar shows his influence in the Enchantments section with Price of Knowledge and Spiteful Visions. I was tempted to build a Ludevic/Vial Smasher deck to compare with the Vial Smasher/Ludevic deck from my first article, but the more I consider it the more it becomes better as a straight Nekusar deck.

Colorless options that any build can use include Crawlspace for the pillow fort, Ghirapur Orrery and Howling Mine for the group hug, and if we have five mana we can pass a Crown of Doom around the table for a targeted Gahiji-like effect.

Of course there is also the thematic option of just blue/red with Kraum, Ludevic's Opus. That idea seems more focused on Kraum than Ludevic though, so I'll revisit that idea in a later article. I'm going with green this time, specifically with Thrasios, Triton Hero. Nothing to see here, just a couple of innocent 1-power wizards with no obviously offensive abilities at all. I'm just here to help the whole table draw their cards and enjoy the game, guys and gals. No need to attack me. I'm helping everyone. If you kill me, you can't get the extra cards anymore, good buddy. Wow that player over there is quite a threat, huh? You'd better do something about that with the extra cards I gave you, friend.

Next time: Ikra Shidiqi, the Usurper