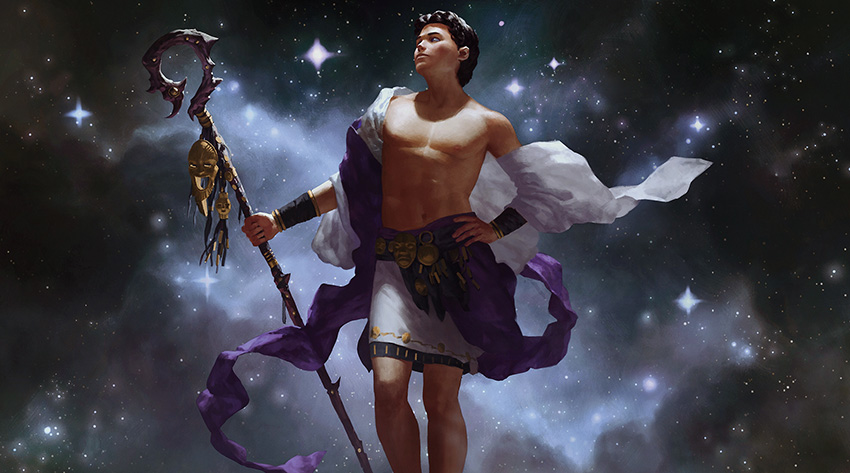 Ravos, Soultender is an angel-in-training who is clearly too sexy for his shirt. Too Sexy for His Shirt

Let’s see what Ravos can do.

If we like the tribal route, the pair of Ravos and Tymna the Weaver are currently the second favorite “commander” for cleric tribal, which doesn’t stray far outside of white and black. See for yourself at edhrec.com/tribes/clerics.

This is not a particularly impressive body for the 5 converted mana cost (as long as you aren’t looking at the shirtless art and the shadows on all those abs, that is.) Flying helps make up for the stats, but we are still owed some value for our mana. The rest of the abilities had better be good…

The more creatures we have, the better this ability works. Suppose that a single mana gets you a single power/toughness worth of creature-plasm. Paying ten mana for, say, a single 10/10 creature means that Ravos gives us a total benefit of +1/+1. Paying the same mana for five 2/2 creatures means we get a total of +5/+5. Ten 1/1 creatures gets a total +10/+10. That’s more. More is better.

We shall be looking for cards that make multiple token creatures so that our deck has “more” creatures in those 99 cards.

Each of our upkeeps gives us one reuse of a dead creature. Since it goes to our hand, we also get to reuse any cast triggers or enter the battlefield triggers inherent to those creatures.

We shall be looking for creature cards that make multiple token creatures when they are cast or enter the battlefield. Preference goes to the best ratio of the number of creatures over the converted mana cost. The total power and toughness we get for that mana is a secondary concern. We can also look at creatures that have a repeatable way of creating more token creatures at a low mana cost, such as a triggered ability whenever they attack.

Since it is an upkeep trigger, that means that Ravos has to survive a turn cycle, which implies that we will be looking at shrouding and hexproofing equipment.

The Data So Far

Ravos is the last of the fifteen partners in this series of articles. When this series started, the idea was to discuss how to use EDHREC’s statistical data to brew for new commanders that don’t yet have much data. Now at this point in time, we already have most of the data that we are going to get for the 2016 partners for the near future. Being on the precipice of playing with the 2017 commanders means that most of the attention will shift to the new hotties, and presumably so will the new decks.

At only 681 all-time decks, Ravos has a relatively low representation compared to other commanders. For example, Thrasios, Triton Hero, Vial Smasher the Fierce, and Tymna the Weaver have each racked up a quarter of that number of decks in just the past month.

Checking the Ravos page, the Signature Cards are mostly white/black lands, some white/black removal, and a white/black signet. That doesn’t give us much direction in terms of color options. In general, if a commander’s Signature and Top Cards are mostly multi-color lands and all-around staple cards, then we can deduce that there isn’t much consensus in the data and thus we might not get very insightful results. There is one white/black/green tri-land here, as well as a couple of green staples in the Top Cards. Mycoloth is notable in that it is not really a green staple, but it is a creature that makes more token creatures, so it gives some validation to our earlier assessment. Also, Anointed Procession isn’t a staple in the general sense, but if we check the new Themes page for Tokens (at edhrec.com/themes/tokens), we see it as the number one card in 81% of the white token decks.

Since green is the only non-Orzhov color represented so far in the most popular cards for Ravos, I’m not going to use green.

Red is good at converting mana directly into multiple 1/1 creatures with a single card, so I am going to use red.

Blue is still up in the air, and whether or not I use blue will probably come down to whether or not I like the red/blue partners better than the red/white or red/black ones for supporting the wide token strategy of this deck.

Neither Ludevic, Necro-Alchemist nor Kraum, Ludevic’s Opus are particularly supportive of a wide aggro strategy, although we probably would be drawing cards from Ludevic’s triggered ability.

Akiri, Line-Slinger doesn’t quite fit since we can only have one Myr Battlesphere in the deck. Bruse Tarl, Boorish Herder is better for decks with large creatures, since he can only buff one thing. Ravos buffs all the things.

Vial Smasher, the Fierce is the only option for this color combination. While her abilities have nothing to do with creature tokens, I am planning on having lots of goblins on the field, among other things. She would also make the inclusion of Goblin Bombardment slightly more thematic. Mardu it is!

Speaking of Goblin Bombardment, since we are planning on making a stupid number of small token creatures, we can include the package of Purphoros, God of the Forge and Impact Tremors for a feasible win condition by mass burn damage. Another way of exploiting sudden bursts of tokens is the old favorite, Cathars’ Crusade. We can amplify our strategy with some redundant anthem effects like Angel of Invention, which also happens to make token creatures when it enters the battlefield. If we don’t draw any of those cards, then Adriana, Captain of the Guard is actually an effective addition to our combat phase, as are pet cards like Legion Loyalist and Iroas, God of Victory. If we need more Mardu cards to fill out the deck, we can look at the decks of Alesha, Who Smiles at Death, who is another commander in the right colors who enjoys making small combative creatures come back from the graveyard.

Hopefully, this series has helped clarify some ways of analyzing new commanders, as well as using EDHREC and card search engines to sculpt a list of cards for a specific strategy. You can find my decklists at this link on deckstats.net, or you can listen to the Commander Time podcast and hear me ramble on about them and other commander-related topics every week.