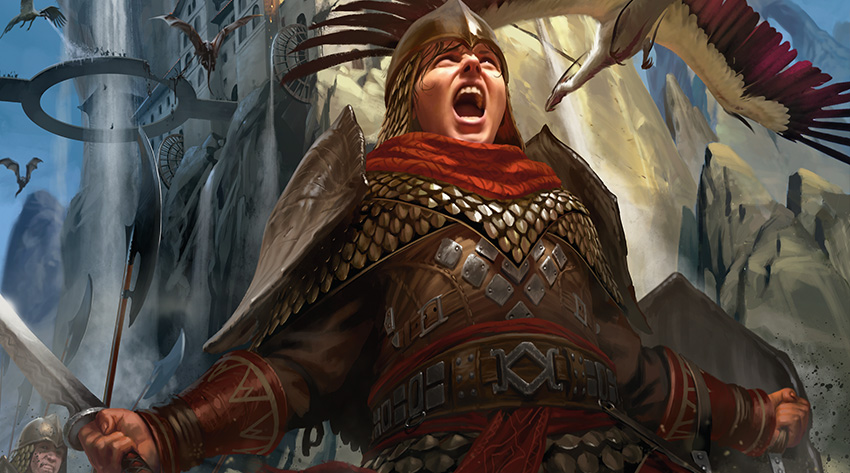 Reyhan, Last of the Abzan is one lonely (and angry) warrior khan.

As her comrades die around her, she rallies strength from their sacrifice and inspires the rest of the troops under her command. That inspiration is a fluid that flows from the fallen to the survivors in her presence. As mentioned in my previous Ishai article, the Atraxa Commander 2016 precon has a good set of cards for a Reyhan build with Ishai, Ojutai Dragonspeaker. Both of these partners are included in the product, they both have "+1/+1 counter" in their rules text, and as a bonus they are both thematically associated with the Tarkir story. Since this approach requires the least amount of deck list modifications, and thus the least amount of thought, I'll spend the fewest number of words talking about it. Moving on... A thematic white/green/black deck based on the Abzan lore would probably look a lot like Daghatar the Adamant. There are only 164 decks for Daghatar, but the Signature Cards have a high consensus judging by the high usage percentages. Luckily, there are many useful enabling creatures here that give benefits to anything of yours that has a +1/+1 counter. Abzan Falconer (flying), Abzan Battle Priest (lifelink), Mer-Ek Nightblade (deathtouch), Tuskguard Captain (trample), Ainok Bond-Kin (first strike), Battlefront Krushok (inverse-menace), and Longshot Squad (reach) each provide a combat benefit to any creature you control with a +1/+1 counter on it.

Still within the Abzan theme, Dromoka, the Eternal creates +1/+1 counters with the bolster ability whenever any of your dragons attack. Anafenza, the Foremost lets you choose which of your tapped creatures gets a +1/+1 counter whenever she attacks.

Ravos, Soultender would be my partner pick for the Abzan color access, but Tymna the Weaver and Sidar Kondo of Jamuraa are also options. Reyhan and Sidar seem to be working at cross purposes, since Reyhan wants to make your creatures big and Sidar wants to keep them small.

Thinking perhaps too deeply about the subject, if Reyhan is indeed the "Last of the Abzan" then what are the rest of these Abzan characters doing here? Shouldn't they be gone if Reyhan is the last one? It makes no sense. Should we wait to cast Reyhan until all the other Abzans in our deck are dead? I don't see that play style getting efficient value out of Reyhan's abilities. Moving on...

There are 14 creatures with the fabricate ability, which gives your choice of +1/+1 counters or 1/1 servo tokens when they enter the battlefield. Even though they are all from Kaladesh, they all happen to be playable in a white/green/black deck.

Coincidence? I think not. Abzan Ascendancy? More like Abzan CONSPIRACY, am I right? There are 12 artifact creatures with the modular keyword and they all have "Arcbound" in their name. They are all 0/0 and enter the battlefield with a number of +1/+1 counters equal to roughly half their mana cost on average. When they die, the modular ability lets you transfer their +1/+1 counters to another artifact creature. If Reyhan is out at the same time, then Reyhan effectively doubles those counters by creating some more. Not all of the Arcbound are efficient for their mana cost, but paired with Silas Renn, Seeker Adept, they can be brought back again and again to sprinkle more counters on your side of the board.

The Reyhan/Silas tag team will need more than 12 artifact creatures to make a feasible deck...

A search shows 61 total artifact creatures with +1/+1 counter in their rules text, including favorites like Walking Ballista (1750 decks) and Hangarback Walker (4324 decks). Steel Overseer (916 decks) would also be appropriate for a heavy artifact creature approach. Depending on your level of general artifact synergy, you might also want to throw in some of those fabricate creatures for a servo swarm option.

Triskelion (4340 decks) meets the search qualifications. If you like a sudden combo win, Mikaeus, the Unhallowed (7994 decks) happens to be in Reyhan's (and Silas's) colors and works well with Triskelion. However, at that point our partners' abilities are no longer relevant. Moving on...

While the aforementioned approaches can make feasible deck builds, let's see what other commanders out there might be taking advantage of +1/+1 counters. We'll search for those who have red, blue, or white in their mana cost to expand our examination outside of Reyhan's given colors.

Animar, Soul of Elements gets counters when you cast creatures and the counters make creatures cheaper when you cast them. We would need to use either Ludevic, Necro-Alchemist or Kraum, Ludevic's Opus as our partner sidekick for the color access.

Ashling the Pilgrim can be a good target to accumulate counters from your other dead creatures to enable a spectacular end to the game for six mana.

Borborygmos can put a +1/+1 counter on each creature you control if he does combat damage to a player. As a 6/7 with trample, that isn't difficult to accomplish. Within black, Drana, Liberator of Malakir has a similar effect with flying and first strike.

Ezuri, Claw of Progress creates +1/+1 counters from your experience counters every turn. While an experience counter commander is tricky to use if they are in the 98 instead of the command zone, Ezuri's page has an outstanding list of creatures in blue/green that take advantage of +1/+1 counters. Fathom Mage, Prime Speaker Zegana, and Master Biomancer are just a sample. Sage of Hours if you want to be downright evil. Grenzo, Dungeon Warden can be cast with extra +1/+1 counters and can put creatures on the field from your library after a brief excursion to the graveyard. The higher Grenzo's power, the bigger the creatures he can summon. If we have a creature-heavy deck and also have the ability to dump extra counters on Grenzo, his ability works more effectively.

Kresh the Bloodbraided gets free counters whenever another creature dies. If those creatures were big, Kresh gets big. Within black, Yahenni, Undying Partisan has a lower-intensity version of this ability.

Marchesa, the Black Rose gives all your creatures dethrone, which creates +1/+1 counters if you point your attackers in the right direction. Even better, any of your creatures that have a +1/+1 counter return to the battlefield after death. Again, we would need to choose an Izzet partner for color access to this version of Marchesa.

Olivia Voldaren generates counters for herself as she pings and then steals your opponents' creatures.

Szadek, Lord of Secrets may look out of place here, but he is a flyer who effectively doubles his power with multiple +1/+1 counters every time he hits a player. You might not care about the cards he's putting in your opponents' graveyards, but he is a fast and repeatable way to accumulate a horde of counters that you ultimately plan on dumping onto another creature later in the game.

The Mimeoplasm turns two dead creatures into a clone with +1/+1 counters, with the added bonus of exiling those creatures from graveyards.

Vorosh, the Hunter is a large flying beater that can get six counters after every combat.

Astute readers may notice that in that list above I didn't highlight any commanders in white. I also twice mentioned an Izzet partner sidekick.

That's because I want to have Reyhan and Marchesa on the field at the same time. I want Animar to help me cast Thraximundar. I want to look all my opponents in the eye when I sacrifice Szadek with forty counters on him to put those counters on Ashling. I want a deck full of creatures so that Grenzo successfully pulls a creature more than half the time. In that vein, all the mana-producing artifacts are replaced with mana-producing creatures so that Ruric Thar, the Unbowed doesn't get grumpy at me. All of this and more is possible!

Throw in some lands that are also sacrifice outlets for creatures...

Search: Type: AND land, Text: AND "sacrifice a creature" (6 results) Add one Primal Surge for extra spice, and there it is.