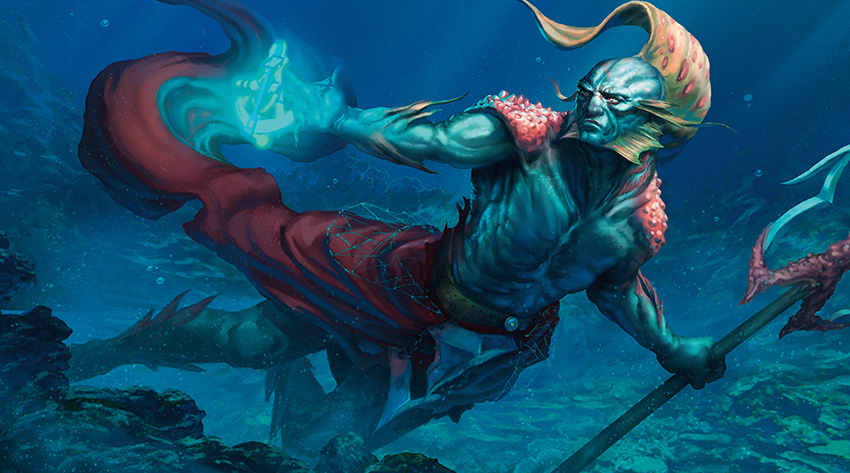 I know plenty of Simic-loving players who would gladly use this guy as a backup partner, just for access to the blue green colors, and using him as a mana sink in the background behind whoever their actual favorite partner happens to be.

Is it possible to design a deck where this guy is not the backup, but is indeed the star?

I like that a lot. Makes me want to throw in a Simic Signet just on principle.

We could pick another few favorite legendary merfolk and then pick a backup legendary partner that gives us access to all the colors we need. Maybe we aren't even going outside of blue and green so far. Then we could brew something tribal that has a common strategy within those legendary points.

At 126 decks, Sygg, River Guide is the most popular merfolk tribal commander by far, with Thada Adel, Acquisitor next at only 8 decks. Note that these numbers are only counting decks that are considered to be "tribal", as edhrec.com/tribes describes:

Decks are considered tribal if they have more than 12 creatures and at least 75% of them share a tribe. We notice that several of the aggregate favorite merfolk cards in Top Commanders, Signature Cards, Top Cards, and Creatures sections also happen to be wizards as well, so we could narrow down to be specifically merfolk wizard tribal if we really like smart fish.

Speaking of which, Sygg, River Guide leads us towards something white/blue/green Bant. Jori En, Ruin Diver suggests a blue/green/red Temur direction. Prime Speaker Zegana probably shows up to draw some cards. Talrand, Sky Summoner is just hanging around in case you like counterspells. Hey, I didn't say i was going to make a merfolk tribal deck, just that you could. If you wanted to. I don't.

There is much more variety of non-merfolk on the wizard page than there were non-wizards on the merfolk page. Both pages had a few Derevi, Empyrial Tactician decks in the Top Commanders, and if a bird wizard is annoying enough on their own to command a merfolk tribal deck then there's that to consider. Just to point out at this time, Melek, Izzet Paragon, Yidris, Maelstrom Wielder, Jeleva, Nephalia's Scourge, and Momir Vig, Simic Visionary are all notable wizards who happen who care a bit more than most about the top card of their own library. Tuck that thought away and let's keep it for later...

Due to colors, including Jeleva and/or Yidris would require Vial Smasher the Fierce to be the second partner, but in my heart, Vial is an honorary wizard already.

Remember that Ikra Shidiqi, the Usurper, Kydele, Chosen of Kruphix and Ludevic, Necro-Alchemist are all potential partners who also happen to be wizards if you want something specifically Sultai, Simic, or Temur wizard tribal.

Riptide Laboratory because why not. We will perhaps need a bit more mana rocks and/or green land ramp than usual. Thran Dynamo effectively only costs 1 if you immediately tap it and use that mana. Thrasios doesn't need to tap, so we could sink as many chunks of 4 mana as we can spend. We can use this ability on an opponent's turn. But what are we buying?

Scry 1, then reveal the top card of your library.

If it's a land card, put it onto the battlefield tapped. We can look at the top card of our library and if we don't like it we can put it on the bottom. Hey, remember those wizards who cared about the top card? This ability already makes each of them slightly better by either confirming a successful plan or avoiding a certain disaster in exchange for an uncertain fate.

Let's search around for other legendaries who scry.

Thassa, God of the Sea has 283 decks so far and there is a certain subtle aquatic theme among the 5 Kraken, 3 Leviathans, and a Whelming Wave among the Signature and Top Cards, not to mention the Octopus, Squid Horror, and Whale to add some variety. I suppose Thrasios would be relevant to a larger sea creature tribal theme around merfolk.

Only Thrasios and the Gods can see the future...

Oh, and Jace too, of course. And the latest Nissa. Surprise! Now everybody knows what it is.

If you wanted a land, you kept the scry on top and you get a tapped land. 4 mana for a land! Yay!

If you didn't want a land, you sent the scry to the bottom and now have a roughly X in one hundred chance of revealing a land, where X is the number of lands you put in your deck. This is also known as "percent". Yes, I know it's not exactly X in one hundred. I said "roughly". The exact odds change with the number of lands in the library over the size of the library as it shrinks. If you want, you can count your lands in game that are played and in hand and in the graveyard and remember how many are thus still in the library and adjust the odds in real time to the mathematical model in your head thinning or thickening the land draw odds percentage as you ramp, flood, or stall, sure, or you could just approximate and say "36 percent" because you put 36 lands in your deck and it's easy to remember and you would rather actually enjoy playing the game. You're probably just going to round it to one in three in your head anyway. Maybe two in five if you're a hot shot.

Anyway, something to think about.

Since you plan on getting more land than usual, maybe consider a landfall subtheme. Avenger of Zendikar, Rampaging Baloths, Roil Elemental, and Ob Nixilis, the Fallen can add some bite to your extra lands. Various fetch lands can be helpful for an extra trigger. Courser of Kruphix, Oracle of Mul Daya, and Into the Wilds help thin the extra land and get to the extra card draw. Speaking of which...

If you reveal a non-land card, then you draw the card.

Hey, remember that we can use the Thrasios ability on an opponent's turn? If it's the first card we drew on that opponent's turn, then if the card has miracle we can cast it at that time. Paying 5 and a blue to cast Devastation Tide or Temporal Mastery during an opponent's turn sounds appealing. Paying 5 and a red to Reforge the Soul right after someone resolves their Demonic Tutor sounds mischievous. If we've been banking mana with Kruphix, God of Horizons then we can play Bonfire of the Damned for however much we have before someone else's combat. Scrying first makes miracle ever so slightly more likely to work in your favor.

If you count shaman, druids, and the occasional berserker as honorary wizards, then this deck is wizard tribal. Otherwise, it is not, but it's sort of close.

Next time: Tymna the Weaver