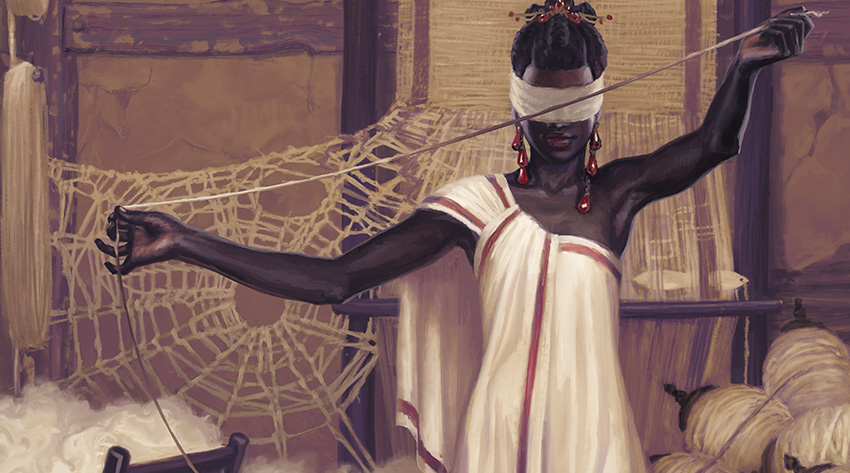 Phyrexian Arena is a popular card. It's in over 23000 decks. That's 31% of all the decks that can play the color black. What if you could do that effect more than once per turn? That would be nifty. If you could do it seven times, then you would be Griselbrand and you would be banned from playing Commander. It's that nifty.

To put a bigger challenge on the potentially bigger reward, Tymna the Weaver has to deal combat damage to a different opponent for each card she buys with a dram of blood. This implies that Tymna wants more creatures than usual in the deck and that they should have some evasion to get the damage through. She's a human and she's a cleric. There are tribal options for each.

White black is a strong color combination for cleric tribal, as shown by the Top Commanders on edhrec.com/tribes/clerics. In fact, all the top have white and most have black. Can clerics expand beyond those colors, or is this approach an Orzhov-only affair with Ravos, Soultender? Let's see how many clerics there are that don't have white or black in their identity.

Most of these results are green. Brutalizer Exarch and Deceiver Exarch seem to be the highlights, along with Juniper Order Druid for combo players. The Amonkhet Vizier cycle is represented in Vizier of Many Faces, Vizier of the Menagerie, and Vizier of Tumbling Sands.

Enough about clerics. I'm not doing that this time. My build would probably look like an Ayli, Eternal Pilgrim deck anyway, or it would turn into another Shadowborn Apostle fiasco. Moving on...

More on that later...

At the beginning of your postcombat main phase, you may pay X life,

where X is the number of opponents that were dealt combat damage this turn.

If you do, draw X cards.

If we search cards for the phrase "number of opponents", we get exactly one result: Tymna the Weaver. We need more results than the one card we already plan to use. Let's try some rewording by implication. If we want the highest number of opponents, then we attacked each opponent.

Not many results here, but it does give some direction. Lightning Reaver is a nice pet card of mine that appeals to me but hasn't actually made it into my decks so far. Let's try some more rewording. If we are doing combat damage, then that implies that we had to attack.

Gatherer search: Rules Text: AND "attack" AND "each opponent" (27 results)

While Tymna's rules text doesn't have all of those words, there are a few more cards that do have them. Some common themes in these results are the keywords myriad and melee.

The myriad ability allows us to attack every player with a minimum of effort by way of some expendable tokens. Within Tymna's colors we have Banshee of the Dread Choir and the flying, vigilant, Herald of the Host. Depending on the partner we choose, we also have options with Warchief Giant, Broodbirth Viper, and Caller of the Pack. If we have any other creatures with enter the battlefield (ETB) effects (or leave the battlefield effects (LTB) like Vela the Night-Clad), then Blade of Selves gives extra value when the extra token copies appear (or disappear). By itself, melee is a minor ability around the same level as prowess, in that it gives a marginal temporary combat bonus to (usually) a single creature. The fact that Tymna is already planning to attack multiple opponents each turn means we can get the maximum benefit from melee without diverting focus from Tymna's strategy. Whether that bonus is strong enough for an EDH game is another question. Custodi Soulcaller is a melee card that happens to give recursion in a style similar to Alesha, Who Smiles at Death, and Tymna's strategy aligns with the Soulcaller's mana-cost limitation.

If we are adding a red partner, Adriana, Captain of the Guard effectively gives all your creatures +3/+3 in the mid game. Grenzo's Ruffians appears mainly in Grenzo, Havoc Raiser (35 decks), but it also sees some play in Saskia the Unyielding (19 decks) for the explosive potential of Saskia's focused duplicate damage. So far I've looked mainly at flying creatures in order to get around opponent blockers. We could add a blue partner to get a few explicitly unblockable creatures. We could add Sidar Kondo and stick to low-power creatures. Other options within Tymna's colors are fear and intimidate, which can reduce the number of eligible creatures that are able to block your scary stuff.

Various landwalk abilities are also useful, and in an EDH game your Trailblazer's Boots are sure to be able to get around.

A heavy token strategy that intends to go wide around opponent blockers probably implies a green partner (Tana, the Bloodsower?), but not necessarily. With Tymna's strategy, Throne of the God-Pharaoh effectively damages each opponent equal to the number of opponents you have. However, if we are spamming tokens (or using Cryptolith Rite or Earthcraft to tap the tokens for mana), then that damage number could get much higher.

Gatherer search: Rules Text: AND "life" AND "each opponent" (98 results)

Without leaving Tymna's color identity, we can gain back the 1 life per opponent cost of Tymna's ability by... draining 1 life from each opponent with extort. Basilica Screecher and Kingpin's Pet are cheap extort creatures that also have flying, so they are more likely to be able to execute an unblocked attack among your opponents.

Another way to make your creatures unblockable is to make sure your opponents don't have any untapped creatures for blocking. Blind Obedience makes it more likely that your opponents won't have blockers available. On a related note, Authority of the Consuls doesn't have extort but it does have another type of lifegain that will help you pay Tymna's costs. On a related related note, I've been looking for a deck where Sentinel of the Eternal Watch fits to tap down each opponent's best combatant.

Other Life Loss and Drain

Even if you aren't being counterattacked by your opponents, Tymna can trigger her own Gonti's Machinations a couple of times and drain a few Tymna-turns worth of life back for a single mana.

In a Sidar Kondo + Tymna build, Pulse Tracker, Mardu Shadowspear, Thornbow Archer, Infectious Horror, and Night Market Lookout would all be unblockable and could work to incremental life advantage (if we aren't already taking the path of infect).

If we plan to draw 3 cards in our second main phase, it would nice if we didn't have to discard them. That's just good sense. Throw in a couple of "no maximum hand size" mana producing staples like Reliquary Tower and Thought Vessel. If we do have to discard something, Filth is a good option that helps all our creatures get some damage through.

As an experiment, without looking at my previous Sidar + Tymna: Infect deck, I'm going to build a Tymna + Sidar deck with more focus on Tymna. Then I'm going to use some tools to compare those decklists and see what cards they have in common.

I've saved both decks in a folder on deckstats.net. Then, from one deck page I can use the Deck Tools dropdown and select Compare Deck. From the next page, I enter the URL of the second deck for comparison. The results show a list of what cards are different, what cards are the same but have different amounts (for example, basic lands), and what cards appear in both decks in equal amounts (which is the interesting part). A direct link to this particular comparison is deckstats.net/decks/compare/723179-1/739745-0/en.

Scrolling down to the 22 Equal Cards, we see both commanders and a good chunk of the land base, which is to be expected. Other than that we see:

Only Blade of Selves and Palace Siege are non-ubiquitous, as defined by not appearing in EDHREC's list of top used cards at edhrec.com/top. This demonstrates that the same two partners can build wildly different decks depending on where you put your focus.

Let's try another comparison, this time with this article's Tymna + Sidar deck and the Ikra + Ishai article deck, which has a more specific focus on lifegain tricks for Ikra Shidiqi, the Usurper but still includes white/black/green (and blue). A direct link to that comparison is deckstats.net/decks/compare/739745-1/723165-0/en.

Scrolling down to the 23 Equal Cards, we see more land base as well as...

The same five staples appear as with the last comparison. The remaining cards are all related to life gain or life drain, including the sixth staple card Deathrite Shaman. This shows that different decks with similar strategies can have more in common than two decks with the same combination of partners.

Anyway, that's another tool for your deck building repertoire. Enjoy.

Maybe give it a watch or listen, thanks.