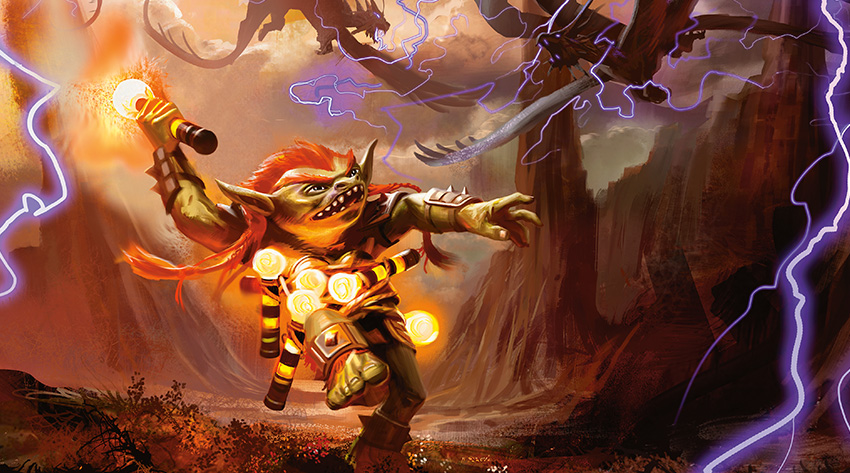 Howdy! I’m Nate Burgess, and I co-host the Commanderin’ MTG podcast where we talk about Commander, also known as EDH. You probably already knew that last part if you’re reading this website, which you are.

In this series of articles, we take each one of the Partners from the Commander 2016 sets and use both Gatherer and EDHREC to go outside our chosen Commander’s colors to find other cards that synergize with what it does. Once we find enough off-color cards that we like, we assemble a strategy and choose our second Partner to give us access to those cards.

We start off easy with one of the currently most popular Partners, Vial Smasher the Fierce.

Remember Guttersnipe? If you have a Jeleva, Nephalia's Scourge or Mizzix of the Izmagnus deck you probably do. Have you ever been brewing a Rakdos, Lord of Riots deck and thought to yourself, “If only Guttersnipe worked when I cast my creatures”. Well now it does. All those cards that you love to cast… in addition to doing what they already did, now they all happen to be burn spells too.

Let’s pretend that we’re a robot and don’t understand how cards work. Or maybe our brain just needs a kick-start because our infant daughter is screaming directly into our hangover. We take the rules text from our chosen partner and do an advanced search on Gatherer.

You don’t have to use Gatherer if you don’t want to; there are other MTG card search sites out there, so find one you like.

Whenever you cast your first spell each turn, Vial Smasher the Fierce deals damage equal to that spell's converted mana cost to an opponent chosen at random.

First let’s focus on the clause “Whenever you cast your first spell each turn”. That is pretty specific, so to get more inclusive results, let’s simplify it and enter “when cast first spell each turn” into the Rules Text box. Also, since we're looking for a Commander, we add “Legendary Creature” in the Type box.

What do we get?

Double check to make sure your chosen Partner shows up in the results, because if it doesn’t then something probably got spelled or worded incorrectly.

Now let’s take that list of Commanders, search for them on EDHREC, and see what shows up in the Signature Cards and Top Cards sections.

Just because a Commander is on the banlist doesn’t mean you won’t find decks for it on EDHREC. The results are all for mono blue, but looking closer we have a lot of low CMC instants. There are a few counterspell effects as usual for a mono blue deck, as well as a couple of cards that untap some of your lands when played. There’s a card with the Delve keyword which makes itself cheaper to cast without affecting the card’s CMC. Teferi, Mage of Zhalfir has the Flash keyword and gives your other creature cards Flash as well. The most used card across Erayo decks is Arcane Laboratory, which limits all players to one spell each turn.

Let’s check our next Commander on the list and see if we can flesh out a strategy. While Rashmi has a lot of Rules text going on, the first clause about casting your first spell each turn matches Vial Smasher’s text verbatim. These results should be very applicable to Vial Smasher since some of the Commander’s mechanics work the exact same way.

The Signature Cards are mostly blue while the Top Cards start adding green. There is even more Delve and Flash here. Mind's Dilation stands out since the first clause is very similar to what our Commander is doing and we might get to cast a spell on another player’s turn for free.

What can we deduce so far?

Optimally, we want to cast one spell on every player’s turn. We can do this with low CMC instants, but they don’t have to be in blue. You can go back to Gatherer and spend some time digging for those in other colors to find things you like. Anything with Flash already on it can be cast on your opponent’s turns, or adding Rashmi’s Leyline of Anticipation and Vedalken Orrery will allow us to do this with all the rest of our cards.

Not all instants are low CMC, but the Delve keyword tells us that we can find cards that are cheaper to cast than they look. Gatherer can show us Delve cards outside of blue, such as Murderous Cut.

Cards that untap your lands when played will give you more mana to cast something else on your next opponent’s turn. Digging down into Erayo’s EDHREC results, by clicking on Cloud of Faeries we can see what other cards are often played in the same decks. Peregrine Drake and Palinchron appear in the Signature and Top Cards and have stronger effects of the same type.

Also in these results is Mulldrifter with the Evoke keyword. This is yet another way to make something cheaper than it looks. Paying alternative costs like Evoke doesn't change their Converted Mana Cost (CMC) on the stack, so if you Evoke Mulldrifter for 1U, Vial Smasher still does the full 5 CMC's worth of damage to an opponent. Going back to Gatherer, we can find other useful Evoke creatures in Vial Smasher’s colors such as Shriekmaw and Ingot Chewer.

Rules Text: “When cast spell deals damage” gives us a few more Commanders to check out.

Skipping ahead a bit… This has something like Vial Smasher’s effect but it happens when your opponents cast spells instead of you. Kaervek’s EDHREC results show a lot of punishing cards that hurt players when they do literally anything. There are some damage doublers and a couple of cards that cut life totals in half.

While Kaervek’s Signature Cards might all be fine to use in a Vial Smasher deck, at this point we’re just taking a Kaervek deck and putting Vial Smasher in the driver’s seat… which might not be a bad idea in itself. Let’s try to expand what we get from these results into the other colors.

Blasphemous Act stands out as another card that gets a heavy mana discount from the printed CMC. Taking the wording “costs less to cast for each” back to a Gatherer search, we find a lot of blue Affinity cards. One possibility could be pairing Vial Smasher with Silas Renn, Seeker Adept and going heavy on Artifacts. Aside from that we also find some useful cards with the Undaunted keyword as well as standouts such as Primeval Protector and Emrakul, the Promised End.

I honestly didn't expect to find much here, but it does share some qualities with Kaervek and I wanted to be thorough. What I did find was the keywords Suspend, Surge, and Miracle. All of these make spells much cheaper than their CMC as long as you can work with the keyword conditions. Surge isn’t quite what we’re looking for with Vial Smasher since it requires casting multiple spells in one turn. Suspend and Miracle are good value and specifically say that you can cast the spell for the reduced cost, so Vial Smasher’s triggered ability will work with them.

Suspend in particular gives us a free spell in our upkeep, which means free damage if Vial Smasher is still on the table since your last turn. Checking Gatherer for “without paying mana cost”, we find the keywords Cascade, Rebound, Cipher, and a few lands with Hideaway. Cascade isn’t going to help Vial Smasher do more damage, but Rebound can in a similar way as Suspend. Cipher depends on creature combat damage, so it may or may not work depending on what the rest of your deck is doing. Hideaway lands are good for casting a surprise bomb for cheap if the conditions are easy to fulfill… Some are much easier than others.

Suppose you like Vial Smasher but you also really really like creatures. Gatherer tells us that are plenty of creatures with Flash, mainly in white, green, and blue. Ruric Thar’s highest ranked Signature Card is Somberwald Sage. Digging into that card and looking at the Top Commanders section, there’s a hint of a possibility of making a mean Jund Dragons deck by pairing Vial Smasher with Ikra Shidiqi, the Usurper and making those big dragon butts gain life for you while they smash faces. At that point, it would mainly be an Ikra Shidiqi deck though.

Not much to see here, but there are a few low CMC Izzet instants that might have been overlooked and could be useful. Cerebral Vortex could be a useful hate card if someone in your meta is stomping your table with Kydele, Chosen of Kruphix.

Now to be thorough, let’s do one last Gatherer search for "Legendary Creature" with “spell’s converted mana cost”. I won’t print the full list, but… do you like Spirit and/or Arcane spells? Do you like them enough to base a deck around them? If so, have at it. Other than that, Endrek Sahr, Master Breeder would be an explosive addition to the creature-heavy Ikra Shidiqi deck mentioned earlier.

I decided that I really do want some blue to go with my Vial Smasher. This choice gives us any of the following as possible partners: Ludevic is my choice for the backup partner this week as he gives some defensive encouragement in case the table gets annoyed with the random damage flying around. Also, Vial Smasher will make it easy to fulfill Ludevic's end step condition. Using the lessons learned from the searching and adding some of my own favorite Grixis pet cards, here’s this article’s decklist:

Hopefully this article helped inspire your own unique Vial Smasher brew, or even just with the process behind digging your own hypertext rabbit hole through the EDHREC database.