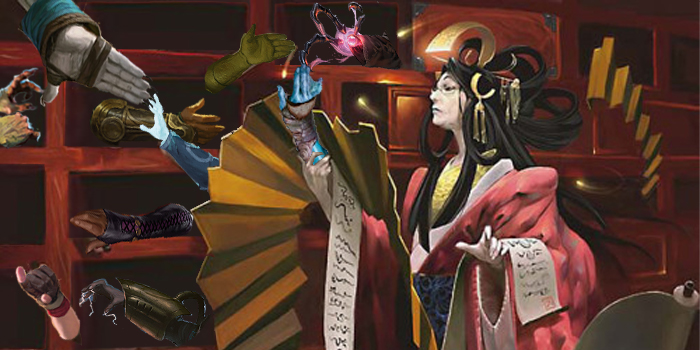 Hello and welcome back to Power Sink, the article series where we take the commanders that tend to cause players to start pointing fingers and we help them get a grip on a different strategy. This time we're putting our hands together for Azami, Lady of Scrolls.

Hailing from Champions of Kamigawa back in 2004, Azami used to be one of the decks people would play when it was time for the gloves to come off. She may not have the digits some newer commanders have, being the eighth most popular mono-blue commander and with 1,028 decks on EDHREC, but she still has the potential to be very powerful. Her stats aren't much to speak of, and some would say that five mana is a big cost in today's environment, but her ability to draw cards simply by tapping untapped Wizards can produce huge advantages, and is just ripe for combos, especially with all of blue's many untap effects. Running a bunch of Wizards works out pretty well for Azami, not just for the cards, but also because they provide a variety of useful and powerful effects. As it turns out, Wizards tend to be good in a fantasy card game about casting spells.

Let's take a look at Azami's average deck to see what causes players to wring their hands in frustration, and how to help Azami unhand that strategy.

From the average list, we can see that Azami decks tend to go for wins by drawing through the deck and winning with cards like Thassa's Oracle and Laboratory Maniac, both of which happen to be Wizards. Triskaidekaphile is a recent addition to Azami's arsenal, giving her a win if it can make it to your upkeep with 13 cards in hand.

This deck also seeks to make use of combos to untap Azami over and over, to draw through the deck on her own. Mind Over Matter is the classic Azami combo card, allowing you to untap her by discarding a card, which her ability will always re-fuel. Isochron Scepter and Dramatic Reversal is a notorious combo that's put to use here as well; provided that you have at least two mana from nonland sources, Dramatic + Scepter gives you infinite mana and/or infinite Azami untaps.

Much of the deck is dedicated to finding and protecting these combos. Tribute Mage and Spellseeker can tutor up a piece of the Scepter/Reversal combo, but they can also be used by Azami to draw cards. Muddle the Mixture is incredible versatile as it can find either the Scepter or the Reversal or it can serve as a counterspell.

Speaking of counterspells, Azami makes use of two that are unique to Wizard tribal lists. For the cost of two blue mana, Voidmage Prodigy lets you sacrifice a Wizard to counter a spell. Patron Wizard can tap Wizard to put a one mana tax on a spell, which is downright terrifying when you're staring down a board full of them while trying to resolve any meaningful spell.

Now that we've established how Azami can rule some metas with an iron fist, lets find out how to loosen her grip.

Rather than sitting on our hands and trying to draw into a combo, we're going for a more hands-on approach. While mono-blue is not known for being great at combat, it does have a suite of creatures that get large from drawing cards or having a lot of cards in hand.

Soramaro, First to Dream, Sturmgeist, and Oneirophage are the best among these, since they come with natural evasion. Psychosis Crawler provides an option for us if we can't attack, and if we can, it's another potentially huge ground beater. Alrund, God of the Cosmos and Toothy, Imaginary Friend not only hit card, but they can also help keep the cards flowing. There's even Body of Knowledge, which can draw even more cards!

We can also suit up creatures with Empyrial Plate or Hand of Vecna and give them a hand up so they can hand out a beating to our opponents. Diviner's Wand provides flying on top of its temporary buff. Wizard Class is useful for giving us no maximum hand size, but once we level it up fully, we can start distributing +1/+1 counters to our creatures.

If going tall fails us, we can go wide with tokens. As long as we're willing to space out our draw over several turns, we can make an army of fliers with Ethereal Investigator and Minn, Wily Illusionist. Chasm Skulker can flood the board with Squid tokens when it dies, and with all the cards we're drawing, we should have no trouble getting enough counters for Ominous Seas to make us some Krakens.

Of course, a deck needs more than a bunch of big creatures to compete. Fortunately, we've got a few tricks up our sleeve.

We're running a total of 29 Wizards in the deck, since our commander needs them to help draw more cards, but we've selected Wizards with abilities that are sure to come in handy. From the average list, we're running Stonybrook Banneret to reduce the cost of our Wizards, but we also have Deranged Assistant and Apprentice Wizard in our ramp package.

If we need to deal with problem cards for a little while, Barrin, Tolarian Archmage and Venser, Shaper Savant can put them back in our opponents' hands, while Cyclone Summoner can bounce most of the board if need be. Vodalian Illusionist is very flexible here, as it can phase a problem creature or save one of our own if need be. Speaking of saving a creature, we can leave Hisoka's Guard tapped to give something shroud!

Quick shout-out to the artifact helpers, too. Tribute Mage and Trophy Mage can find mana rocks or the key Equipment for the deck, while Archaeomender can get them back if they get removed.

To help with our combat plan, we have a few Wizards around to grant evasion. Wingcrafter and Merrow Levitator can grant flying, and Passwall Adept lets us spend extra mana to make something unblockable. For those turns where we need a huge swell of cards, Riptide Chronologist can be sacrificed to untap all of our Wizards, which gets even better if we have Faces of the Past on board. Descendant of Soramaro is my favorite card in this list; four mana is a lot for a 2/3, but this deck will have so many cards in hand, and paying two mana to rearrange that many cards on the top of the deck is very powerful.

That concludes the second installment in my miniseries on mono-color commanders! I was inspired to brew an Azami deck after a conversation with Aaron Radney over on the EDHRECast patron discord. Aaron brewed up a very cool Azami deck that keeps its power in check by splitting the deck's attention on multiple themes instead of focusing entirely on a specific win condition. It's got combos, spellslinger synergies, and Orvar, the All-Form as a secret commander - exactly the kind of deck I love to play against. Aside from being a great deckbrewer, Aaron is also an excellent fantasy artist and cartographer, and you can check out his work here.

Hopefully you enjoyed this take on an Azami deck that isn't afraid to get its hands dirty. As always, feel free to leave comment below and I'll see you in two weeks when I take on a mono-black commander.